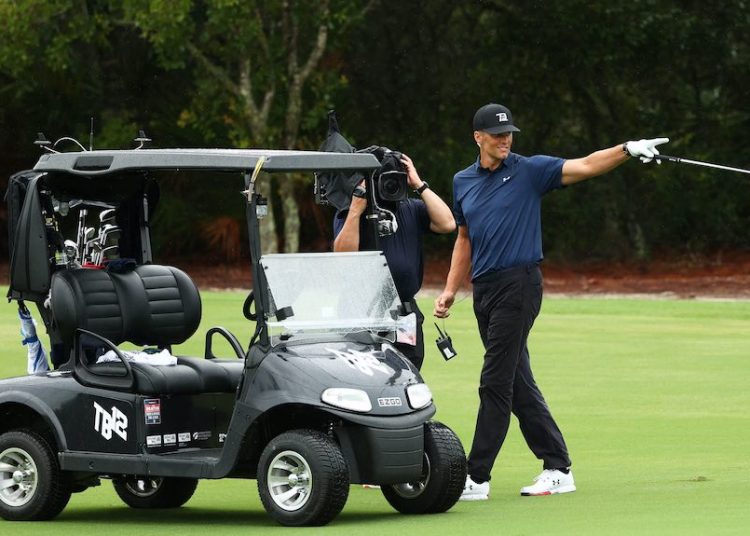 May 24, 2020; Hobe Sound, FL, USA; Tom Brady reacts after holing out from the fairway on the seventh during The Match: Champions for Charity golf round at the Medalist Golf Club. (Getty Images for The Match via USA TODAY Sports)

Symbolically, May was a great month for the legal U.S. sports betting industry and the legions of bettors across the country. It marked the return of live sports on American soil, highlighted by mixed martial arts, car racing, and golf.

The UFC kicked things off with a card on May 9 in Florida that sportsbooks said compared to a full weekend of NBA games. The prelims were on ESPN, and the main card was on pay-per-view. The betting handle, which can’t be quantified more precisely until May revenue reports are out, spoke to the pent-up demand for wagering.

While the UFC gets credit for the return to sports and the NFL Draft in April proved a huge draw for wagering, arguably the most high-profile event so far in May was the exhibition match involving a pair of legendary golfers and a pair of Hall-of-Fame quarterbacks. On Sunday, Tiger Woods and Peyton Manning squared off against Phil Mickelson and Tom Brady in “The Match 2” — a made-for-TV affair with the proceeds going to charity.

Huge TV numbers for “The Match:” Champions for Charity:

Woods, Manning and the QBs pulled it off, prompting calls for another showdown at some point in the future. The event reportedly drew more than six million viewers at its peak. Reports indicate that the UFC May 9 card generated significantly more betting interest than The Match, as the MMA betting menu that Saturday night was much more plentiful than a single, one-day match between four golfers.

Add it all up, and total wagers at legal U.S. sportsbooks has reached approximately $22 billion, en route to $25 billion in 2020 — sooner or later, depending how the most popular sports leagues navigate complex circumstances as the novel coronavirus pandemic continues to wreak havoc and limit gatherings across the country.

The Match 2 came as Major League Baseball and its players union are engaged in high-stakes negotiations about whether there will be a season in 2020. Right now, sportsbooks have resorted to highlighting professional baseball games in South Korea and international table tennis.

The NBA is mulling a return to action with Disney’s ESPN Wide World of Sports Complex in Florida a candidate to host games for the remainder of the 2019-2020 season. Any kind of season in 2020 for the NBA and MLB would aid starving sportsbooks across the country. Books are still taking futures bets on both MLB and NBA results in 2020, wagers that will have to be refunded if the sports don’t return to action.

Meanwhile, the NFL remains America’s most popular sports league, and that’s reflected in the betting handle. Combined with NCAA football, wagering on the gridiron is estimated to account for more than a third of all betting dollars. Basketball, which includes the March Madness frenzy that was canceled this year, is closing the gap, but football is still king.

The latest on the NFL front includes plans to have games with fans in the fall. College football seems to be at risk, as some universities have indicated that games may be canceled if students aren’t back on campus. It’s too early to tell what might happen to NCAA contests.

States are starting to reopen their respective economies as summer unofficially begins, the results of which will impact the sports landscape in the months ahead. Re-closing of states if there’s a hard second wave of COVID-19 could spell trouble for the major pro leagues.

In May 2018, the U.S. Supreme Court overturned the Professional and Amateur Sports Protection Act of 1992. Time sure does fly, as the two-year anniversary of the ruling was on May 14.

In the early stages of New Jersey’s fight for legal sports betting at its struggling Atlantic City casinos, which was resisted tooth and nail by the major pro sports leagues, the odds didn’t appear great that the decades-old law would be overturned. However, as time went by it looked more and more like a strong possibility. It ended up being a win for states’ rights in the highest court in the land.

The repeal was also a win for many businesses (including the leagues, which are expected to reap billions from deeper consumer engagement), but more importantly, a win for sports fans.

Like a poker room, a sportsbook isn’t a huge moneymaker for a casino compared to the slot machines or the table games such as blackjack. Books typically hold 5-7% of the handle in form of winnings, so it’s a relatively low-margin business. In the online gambling realm, sports betting is seen as an industry entry point for the much more lucrative iSlots.

Prior to PASPA’s repeal, the American Gaming Association estimated that U.S.-based patrons wagered roughly $150 billion on sport annually, with all but about $5 billion passing through local bookies or offshore gambling sites. Nevada was the only state boasting legal sportsbooks allowing single-game wagers. While bookies and offshore sites have long run afoul of state gambling laws, those taking bets and not placing them have suffered legal consequences — and not often, as it’s costly and difficult to prosecute enterprises based outside the U.S.

That’s not to say regulated books aren’t your opponent — they want to entertain you, but also beat you over the long run. But at least some benefits of that commercial activity stay within the U.S. That said, many of the top regulated sports betting firms are based overseas, so profits made from Americans do still leave the country. Nothing’s perfect.

Since PASPA fell, sports fans have wagered more than $22 billion through regulated retail and online/mobile sportsbooks. You’ll be hard-pressed to find someone in the industry saying that figure isn’t a success. As of late May, 22 jurisdictions had legalized sports betting, including 10 with online/mobile betting. Four of the them with enacted legislation hadn’t yet launched their respective industries.

As expected, as a consequence of the coronavirus pandemic and an unprecedented suspension of professional sports contests throughout the U.S. and the world, betting handle has plummeted.

States with online/mobile platforms and remote registration saw handles fall 60% from February to March. The handle in April was even worse, with a fall of more than 80% compared to February. The books had to improvise with expanding betting to obscure offerings such as Belarusian soccer in order to generate some revenue in April.

Fortunately for the industry, the situation started to improve in May.

Based on what we know about the unregulated sports betting market, and the figures we have from the first two years since PASPA fell, the legal industry in the U.S. has captured in the ballpark of 10% of the previously untapped market. That can also been seen as a success.

The unregulated market will likely grow alongside the legal one, however, as sports betting goes more mainstream. Some states have gone with markets that will have some challenges dealing with the illicit bookies.

The casino industry, along with its state partners, are trying to inform people of the changes. The AGA found in 2019 that only 41% of Americans know a bookie isn’t a legal operation. It will be a slow process to change the consumer habits, but the goal is to bring the vast majority of the handle into regulated channels.

According to a 2017 Oxford Economics study of the potential for the U.S. sports betting industry, Americans would wager more than $237 billion annually if all states legalized the activity and had online/mobile platforms. Of course, some states will go retail-only, but with around 80-90% of the betting handle occurring online in the states with both retail and online/mobile, it’s only a matter of time before most states meet consumer demand and embrace the technology.

Industry revenues would depend on the various tax rates in states, but the projected handle shows that with regulation, sports wagering will become even more popular than it was before PASPA’s repeal. It’s still the early days of the sports betting boom.