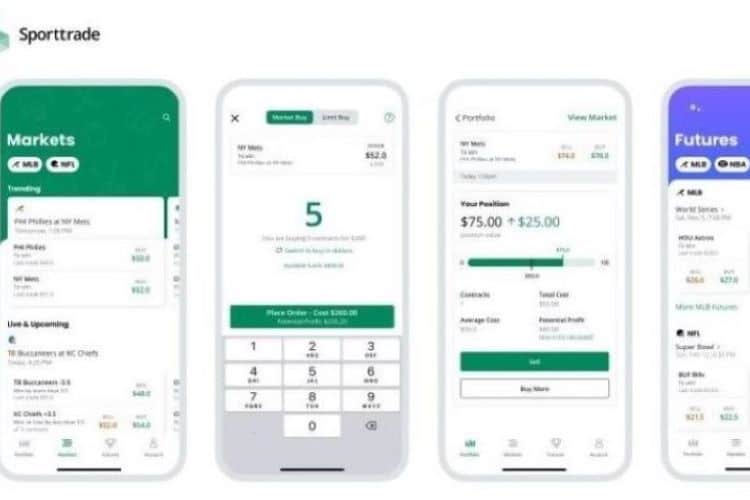 Over the last two weeks, the Philadelphia Phillies have delighted their fans by sending two division winners off to early vacations, including the defending World Series champion Atlanta Braves.

For Sporttrade, a sports betting newcomer launched only in New Jersey to this point, the Phillies’ improbable run serves as an archetype for spotting an undervalued asset that can outperform expectations through a massive upset. On Friday, with their National League Division Series against the Braves knotted at one game apiece, a Phillies buy contract on Sporttrade’s future market was priced at $7, the third lowest among the eight teams that remained in the Major League Baseball playoffs.

Futures are now live on @sporttrade_app. Why is this such a game changer?

Grabbed @Phillies to win the World Series before the NLDS.

I’ve nearly 3x my money already and can trade out AT ANY TIME pic.twitter.com/ezBYpfn5jN

Two days after the Phillies eliminated the Braves in four games, the Phillies’ price on Sporttrade spiked to $20.50, rewarding astute traders with a healthy profit. In between, Sporttrade officially went live with futures markets on Saturday, providing New Jersey customers with a new trading option for the top professional sports.

“The futures experience will be incredible,” Sporttrade CEO Alex Kane told Sports Handle in an interview. “We think customers will love it.”

Cashing in on an unexpected playoff run

Sporttrade, an online trading platform that bills itself as the “Robinhood of Sports Betting,” officially launched a real-money platform in September before Week 2 of the NFL regular season. The platform enables customers to trade on sports outcomes in real time in a way similar to how investors trade stocks. Sporttrade joined Prophet Exchange and became the second new sports wagering platform to go live in the Garden State since the beginning of August.

As of Monday morning, about 22,000 contracts have been traded on Sporttrade, Kane told Sports Handle, with about 13,500 traded in-game.

Sporttrade is headquartered near the Camden Waterfront on the banks of the Delaware River, approximately three miles from downtown Philadelphia. As a result, Philly sports is closely monitored by Sporttrade’s team of traders. Kane even tracked the Sporttrade app a few weeks ago from his seat at Citizens Bank Park during a Phillies regular season game.

Kane spoke with Sports Handle for a 40-minute Zoom chat on Oct. 4, one day after the Phillies clinched the National League’s final playoff spot. Given the unexpected postseason runs by the Phillies and the San Diego Padres, Kane’s comments on the allure of trading a massive underdog proved to be prophetic. At the time, Kane noted that a trader could purchase a buy contract on the Phillies to win the World Series on Sporttrade’s beta app for as low as $3. If the Phillies somehow upset Albert Pujols and the St. Louis Cardinals in the wild card round, Kane explained then, the Phillies’ price might double to $6.

On Friday, Oct. 14, the L.A. Dodgers and the Houston Astros remained the co-favorites on Sporttrade to win the World Series, with a price of $27 per contract. But the market shifted drastically after the Padres rallied to eliminate the Dodgers while the Phillies knocked out the defending champion Braves. By Monday morning, the Astros’ price surged to $37, far ahead of the Padres, the second choice at $21.50.

The prices on Sporttrade’s futures market closely resemble the World Series odds at traditional sportsbooks. For instance, at FanDuel on Monday, the Astros hovered as the heavy favorite at +140, with the Padres (+320), Phillies (+340), Yankees (+500), and Guardians (+1300) trailing considerably. There will certainly be more fluctuation after a decisive ALDS Game 5 between the Yankees and Guardians on Monday night in the Bronx.

But Sporttrade can differentiate itself from the traditional books with an attractive feature. Sporttrade allows traders to get “in and out of the market” at any point. If the Yankees advance on Monday, the price on a Bronx Bombers contract will rise from Monday’s level of around $15. A trader can sell the contract ahead of Game 1 of the American League Championship Series and re-buy at a lower price if the Astros take the opener.

By the same token, there is a strong likelihood that the price on the Padres-Phillies Game 1 loser will fall steeply after Tuesday’s opener.

The outcome of Sunday’s action in the NFL also triggered some movement on Sporttrade’s football markets. The Bills, the top choice at Sporttrade, outlasted the Chiefs 24-20 in a potential preview of the AFC Championship. Buffalo is the definitive Super Bowl favorite at nearly every sportsbook nationwide.

The price on the Bills jumped $2 per contract to $24.50 after the thrilling win. The Chiefs, Bucs, and Packers all fell by more than $1 with losses on Sunday. The Eagles, meanwhile, inched up 50 cents to $13 after defeating the Cowboys on Sunday Night Football. 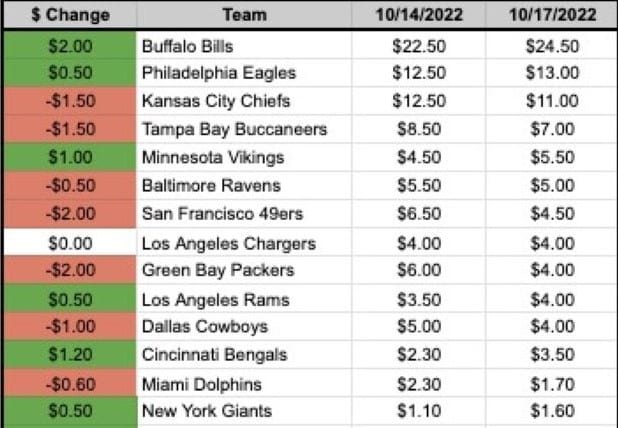 On NBA markets, the Warriors occupied the top spot on Monday with a buy contract of $13.50. Two others, the Clippers and Bucks, trailed closely at $13 and $12.50, respectively. Two local teams for New Jersey bettors, the Nets and the Sixers, were priced at $11 and $8, respectively.

Kane indicated that a bevy of new markets could be introduced over the next several weeks. On Thursday, all four top North American pro sports leagues will be in action, in a rare occurrence known as the “sports equinox.” The equinox will also occur Sunday, when games are scheduled in the NFL, NBA, NHL, and MLB.

Ahead of the 2022 FIFA World Cup in November, Sporttrade plans to offer futures on the largest global sporting event.