An unexpected worst-to-first rally by St. Louis would hit some sportsbooks hard 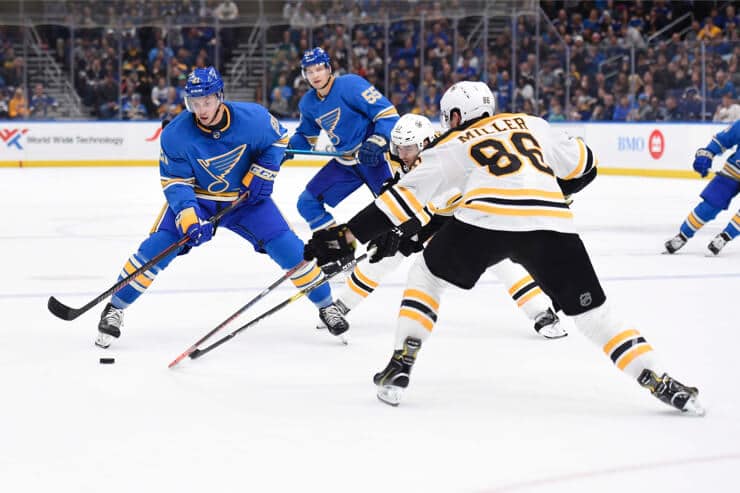 But as fate would have it, Berry replaced a colleague at a conference at the Paris Hotel & Casino after she took an absence from work to visit her new grandchild. After three exhausting days at the conference, Berry needed to blow off some steam. He decided to make some sports betting futures wagers on his favorite teams.

At the time, the St. Louis Blues had one of the NHL’s worst records and steep odds to hoist the Stanley Cup. Berry, a lifelong Blues fan, glanced at the board at the Paris sportsbook and found longer odds than he expected: 250/1 on St. Louis to win the title. The odds seemed high for a team that had just won three of four games and was starting to gel under new coach Craig Berube. Berry decided to make a $400 wager.

“Maybe the big man above is looking out for you at certain times like that, it just felt right,” Berry told Sports Handle.

Now, Berry is one of a limited number of bettors sitting on a winning lottery ticket. If the Blues prevail in the Stanley Cup Finals over the Bruins (Game 1 is Monday night), the bettors will cash in with a hefty payday.

Another scare for the Vegas books

Last May, sportsbook managers across the Las Vegas Strip experienced a number of restless nights. The Vegas Golden Knights, a newcomer to Sin City, completed an impressive run through the Western Conference playoffs by eliminating the Winnipeg Jets in five games. As two veteran squads in the East battled in a tight seven-game series, the expansion Golden Knights stood four games away from completing one of the most improbable feats in sports history.

Across the valley, hordes of fans held futures tickets on the Knights to win the Cup — many as a souvenir to commemorate the team’s inaugural season. While most fans emptied their pocket change on the wager, spending less than $10, others viewed the bet as a smart value play. One bettor stood to make $120,000 on his $400 wager had the Knights defeated the Capitals in the finals.

In the end, the Knights bowed out to Washington in five games, failing to become the next Leicester City (an English Premier League club that captured the 2016 crown at opening odds of 5,000/1).

If the Knights had won the Cup, several Las Vegas books stared at liabilities in the high-six to low-seven figure range. A Stanley Cup triumph by the Golden Knights in their first year of existence would have felt like a once-in-a-century occurrence. One year later, though, some books are again cringing entering the Stanley Cup Finals.

At William Hill US, the liability on Blues futures is about one-third of the seven-figure liability it faced on the Knights in last year’s playoffs, said Nick Bogdanovich, the company’s sportsbook director.

“This is a standard case any time a 300/1 comes in, you’re going to get hurt whether it’s Leicester City or the Twins and Braves in 1991,” Bogdanovich said.

Despite the unexpected runs from the Knights and the Blues over the last two season, Bogdanovich will not consider placing a cap on NHL futures.

One bettor at the Westgate Superbook locked in a price on the Blues in January at 300/1, but only spent $20 for the ticket. Another placed a $10 bet on St. Louis later in the month at 150/1.

“We were very fortunate not to get hit with those odds, as I hear there’s some liability around town,” said Jay Kornegay, vice president of Race & Sports Book Operations at Westgate Resorts.

Down the street, MGM Resorts has taken multiple wagers at a number of its properties on the Blues to win the Stanley Cup.  The payouts are in the mid-five figures, said Lamarr Mitchell, Race & Sports Book Director at MGM Grand.

“The liability on the Blues is comparable to the exposure we had on the Vegas Golden Knights in 2018 which is in the low six figure range,” Mitchell said.

As the Blues embarked on a hot streak over the first few weeks of the year, the odds began to drop. The Blues were as high as 300/1 on the futures market on Jan. 18, but fell back to 200/1 less than a week later at NHL All Star Weekend. Then St. Louis hit its stride during the month of February, going a scorching 12-1-1 in 14 games. By Feb. 28, the odds plummeted all the way to 12/1 as the team emerged as a contender to win the Western Conference.

How the Blues Went From Last Place to the Stanley Cup Finals https://t.co/Ga8yirAPfc @benshpigel on the worst to first run in Hockey's Heartland

Bettors remained on the Blues train toward the end of the regular season and have shown steady support throughout the playoffs. St. Louis entered the postseason as a chic 10/1 pick to win the Cup, odds that dropped to 5/1 after its first-round victory over Winnipeg and 3/1 following its second-round triumph over Dallas. Still, William Hill has pegged Boston (-155) as a considerable favorite over the Blues (+135) in the finals.

At FanDuel Sportsbook in New Jersey, St. Louis is +1600 to win the series in four games while the Bruins are +1000 to sweep the Blues. A FanDuel spokesperson said she is not aware of any large futures bets placed on the Blues at the sportsbook.

Before placing his bet at the Paris, Berry wanted to check out the lines at the Bellagio Hotel and Casino to see if he could get a better price. To his chagrin, the odds on the Blues there were only 150/1.

“I literally sprinted past the fountains there,” Berry said. “I knew I was going to make the bet, but I thought, before I do this, maybe they’re at 300/1 at the Bellagio.”

Berry, 31, left Las Vegas with a $400 ticket on the Blues at 250/1 and a $100 futures ticket on the Cardinals to win the 2019 World Series. He has since posted the Blues ticket on PropSwap, an online marketplace that matches buyers and sellers of sports wagers.

New episode of the PropSwap Podcast is OUT! This week, we dive into the $100K #STLBlues ticket, discuss the NBA Eastern Conference Finals & recap @ICENorthAmerica.

At several points during the playoffs, Berry has turned down offers from buyers on the marketplace including one this week for $40,000. Although Berry will still consider selling the ticket at the right price, he plans to let it ride for now.

The Blues will be making their first appearance in the Stanley Cup Finals in 49 years. A city that has been accustomed to one heartbreak after another from its beloved hockey team is yearning for a title.

“I feel like this is our time to do it,” Berry said. “It’s been emotional not just because there’s money on the line for me, but just for the whole town because they deserve this.”