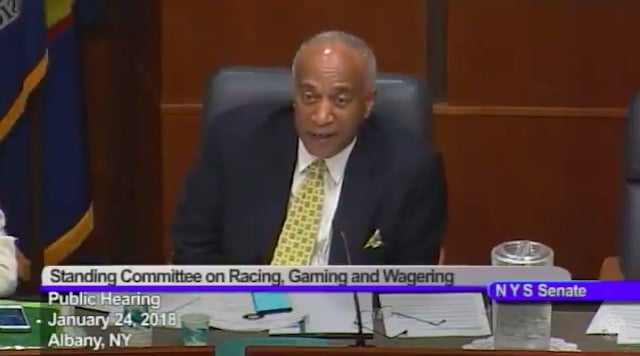 With Assembly Member Gary Pretlow’s latest sports betting bill referred to the Assembly’s Racing and Wagering Committee in the New York State last week, lawmakers are up against a short clock to make sports betting legal in New York. The legislature adjourns June 20, leaving seven business days to make NY sports betting legal before having to wait until 2019.

Pretlow (D-District 89) officially introduced his bill, A11144, last Friday and as yet, no formal action has taken place in the Racing and Wagering Committee, of which he is the chairman. According to Pretlow’s office, the bill does not yet have a date for a committee hearing, but it is not unreasonable to believe that one could be called before the end of the session.

State lawmakers seem split on whether or how to proceed. Senator John Bonacic (R-District 42) has been championing New York sports betting on the Senate side, but his bill, S7900, has sat in the chamber’s Rules Committee since June 1 while he’s waited for the Assembly bill.

Lawmakers Are Continuing to Push to Make NY Sports Betting Legal Before the End of the Legislative Session on June 20.

Bonacic introduced the bill in March, and after an amendment in the Finance Committee, it was referred to the Rules Committee. There is no hearing or vote currently scheduled, according to the state’s legislative website.

Pretlow and Bonacic have been joined by Assemblyman Clyde Vanel (D-District 33) in the fight to legalize sports betting in the Empire State. Vanel in April said “we won’t be left out,” and introduced A10322, a bill that would create a task force to examine online sports betting.

But Governor Anthony Cuomo said last month: “nothing’s going to happen this year [on sports betting] because there’s literally just a number of days left in the legislative session and this would be a very big issue to tackle.”

Just because it’s unclear in what direction New York will go doesn’t mean that there’s been no activity. On Monday, Tioga Downs racetrack near Binghamton announced a new partnership with Betfair US to run its sports book. Betfair US is a division of Paddy Power Betfair, which operates sportsbooks throughout Australia, Europe and the United Kingdom.

In Addition to Legislative Efforts, Tioga Downs Has Partnered With Betfair US and Joe Torre Visited Albany as NY Tries to Make Sports Betting Legal.

Last week, former New York baseball legend Joe Torre became the second former Yankees skipper to make the rounds in Albany, pushing for the royalty or “integrity fee” that the professional leagues are seeking. Though Torre said he wasn’t lobbying “for one side or another,” he did say that he wanted to make sure “the integrity of the game” remains protected.

That “integrity” has been a contentious issue throughout the country. The major professional leagues believe that they deserve a cut of the sportsbooks’ profits — for integrity monitoring purposes and because they just deserve a piece of the revenue, plain and simple. The leagues do not currently receive any sort of fee from Nevada. Neither Pennsylvania nor West Virginia passed laws that include a royalty or integrity fee and the bill just signed by New Jersey Governor Phil Murphy’s doesn’t include a payout to the leagues.

But Pretlow’s bill, like Bonacic’s, does include a 0.25 percent off-the-top cut for the leagues, capped at 2 percent of operator gross revenue. His bill explicitly calls it a “sports wagering royalty fee.” The passage of this bill would mark a needed win for the sports leagues.

Both Pretlow and Bonacic’s bills (S7900B is identical to A11144, according to the Assembly website) would also give leagues valuable rights to control the data that sportsbook must use to grade wagers. The condition? The sports must “makes such feed available for purchase by the casinos on commercially reasonable terms as determined by the commission.” This will be open for much interpretation.

New York State Sen. @JohnBonacic on sports betting legislation: "We are hopeful we can get something passed by the end of the session."