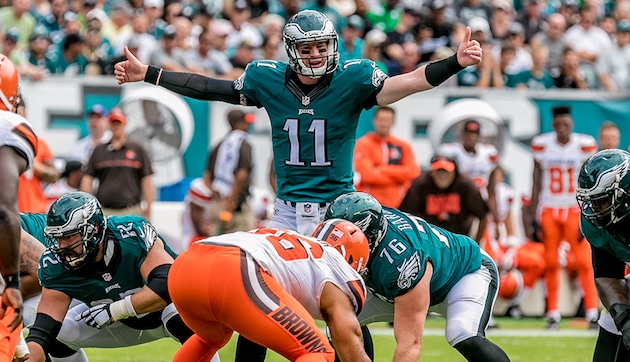 If there was ever any question about whether or not professional sports leagues would benefit from legal sports betting, it was answered Wednesday.

American Gaming Association senior vice president of public affairs Sara Slane used phrases like “great upside for all stakeholders” and “massive economic” increases when describing how sports betting would impact the professional sports leagues during a conference call with media on Tuesday.

Legal Sports Betting Must Reach ‘Full Potential’ for NFL and Other Pro Leagues to See Benefits Described in Study.

“This research makes one thing clear: Widely available, legal, regulated sports betting will create huge new revenue opportunities for sports leagues,” Slane said. “As legal sports betting continues to expand across the country, the AGA stands ready to help states create their legal markets so that they adhere to best practices, allowing all stakeholders to take advantage of the huge opportunity that exists, while protecting the consumer and integrity of the game.”

Where will the money come from? According to the study results, the NFL will benefit the most from indirect means, including “increased consumption and engagement with the league and its contents/products.” In simpler terms, the NFL will get more viewers and sell more gear creating an increased revenue stream through media rights, sponsorship, merchandise and ticket sales. According to the study, the nearly $1.8 billion in new revenue represents a 13.4 increase for the league. The NFL will see the biggest increase in revenue from media rights, which spending is expected to increase by 17.9 percent.

While the six states that have legalized sports betting declined to include a royalty in their new laws, the Neilson study shows that the NFL — and by extension, Major League Baseball, the NBA and NHL — will benefit from increased spending my sports betting operators and data providers. Operators are projected to spend $451 million on advertising, which, because of rights fees, will go directly to the NFL. In addition, study results project $92 million in sponsorship revenue and $30 million in data.

Slane reiterated that not only is the AGA opposed to an “integrity fee,” but that such a fee would hinder the growth of sports betting and, in turn, the revenue increases associated with it.

AGA Does Not Support the ‘Integrity Fee’ and Says Pro Leagues Will Only Hinder Own Sports Betting Revenue by Pushing for Royalty.

“If there is a fee for data, for example, then you are hampering the casino operator from offering a favorable product,” Slane said. “So, when leagues are pushing for integrity fee or fees for purchasing data, they are really tripping over dollars to pick up pennies.”

Responding to a question about which sports leagues would benefit most, Slane pointed the NFL as the biggest of the “Big 4,” followed by basketball (both professional and college), Major League Baseball and the National Hockey League. But the issue isn’t necessarily who will benefit most, but in what ways will new revenue streams develop. While all the leagues will see revenue increases from fan engagement and advertising fees at the outset, they’ll also benefit down the road from in-play wagering, Slane said.

“The next frontier is in-play betting,” she said. “That is the mechanism that will keep the fan engaged throughout the game.”

Neilson surveyed more than 1,000 adult sports fans, including NFL fans and sports bettors across the country to “model how a national, legal sports betting market would affect the sports consumption habits of non-bettors, casual bettors and avid bettors, and how this change in consumption would translate to increased revenue.”