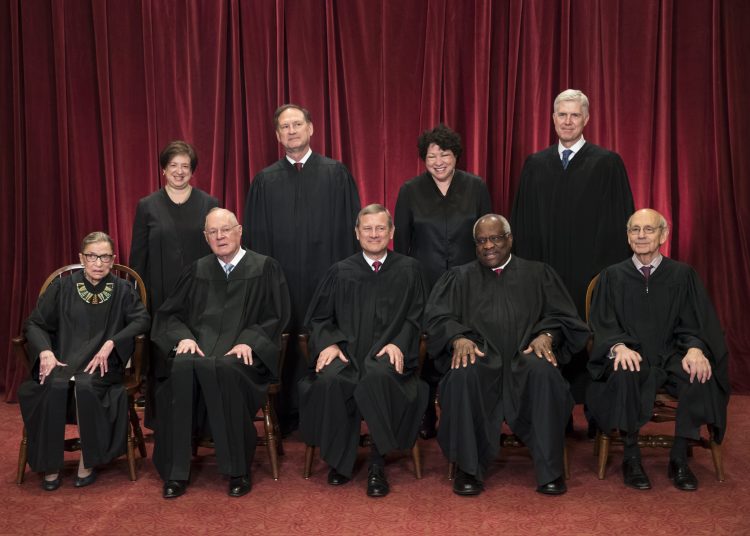 Justices of the Supreme Court of the United States

On Monday before the deadline, attorneys for Respondents led by Paul D. Clement filed their brief on the merits in the matter of Christie vs. NCAA, better known as New Jersey’s sports betting against the leagues in the Supreme Court of the United States. The NCAA along with the NFL, NHL, NBA and MLB (the “Leagues”) filed the 71-page brief arguing that the 1992 federal law effectively banning sports betting outside Nevada is permitted because it’s the federal law of the land, regardless of whether states wish to have sports betting in their borders.

The Leagues argue that the that specific law at issue, the Professional and Amateur Sports Protection Act (PASPA), represents an “ordinary and appropriate operation of the Supremacy Clause” and does not impose any affirmative or coercive action on New Jersey (or other states) that would qualify as “commandeering,” as New Jersey argues in its opening brief.

The Leagues Stick to the Script, Arguing That PASPA Is a Routine Application of the Supremacy Clause That Requires New Jersey to ‘Do Nothing’

All along through this legal saga and in the most recent chapter beginning in 2012, the Leagues have argued that there is nothing unusual about PASPA — although interpretations of PASPA in the Third Circuit Court of Appeals have evolved somewhat.

Disputing New Jersey and the New Jersey Thoroughbred Horsemen’s Association (collectively Petitioners) arguments that PASPA violates the “anti-commandeering” doctrine by forcing it to upkeep and enforce anti-gambling prohibitions, the Leagues spend a lot of space discussing the Supremacy Clause (Article VI, Clause 2 of the Constitution) and federal preemption of state laws and state courts. They write:

“While PASPA requires states to refrain from engaging in certain conduct and from embracing certain policies, it does not force them to adopt federally-prescribed policies or to enforce federal law. Put differently, PASPA preempts but does not commandeer. The distinction is critical. Federal preemption of state law is both permissible and  commonplace, and it does not cross any constitutional line just because it prevents states from achieving their preferred policy objectives. Commandeering, by contrast, is impermissible but arises only when Congress goes beyond precluding state action and affirmatively commands it. … That is a very rare thing.”

That’s the theme of this brief: there is nothing remarkable about PASPA, and Petitioners’ attempts to characterize the law as coercive or requiring “affirmative action” or is fundamentally flawed they write. The Leagues again:

“Indeed, PASPA does not require states to enact, maintain, consider, enforce, or do anything. Instead, the statute sets forth only what states (and private parties) may not do—i.e., take action inconsistent with the federal policy against states sponsored sports-gambling schemes.”

Clement and the Leagues discuss much more in the dense but well-crafted brief, but that’s the ultimate takeaway.

The Next Steps in the New Jersey v. Leagues Sports Betting Case

Petitioners now have 30 days to file a reply brief rebutting the Leagues’ arguments. During this time, the high court allows only seven days for amicus briefs (briefs by “friends of the court”) in support of the League, which in this case may come from anti-gambling groups or other individuals or researchers for whom the court grants permission to file.

The United States Solicitor General, Noel Francisco, who acts as the attorney for the government, may also file a brief in support of Respondents. Because then-acting Solicitor General Jeffrey Wall previously recommended in a brief that the high court not grant Petitioners’ request for a writ of certiorari (a request for the court to hear the case), it’s possible that he declines the opportunity here.

And then the court hears oral arguments by both sides on December 4. Each side will have approximately 30 minutes to make their case, although the nine Supreme Court Justices will certainly interrupt with questions about various aspects of the case and the constitutional questions at issue. Stay tuned.