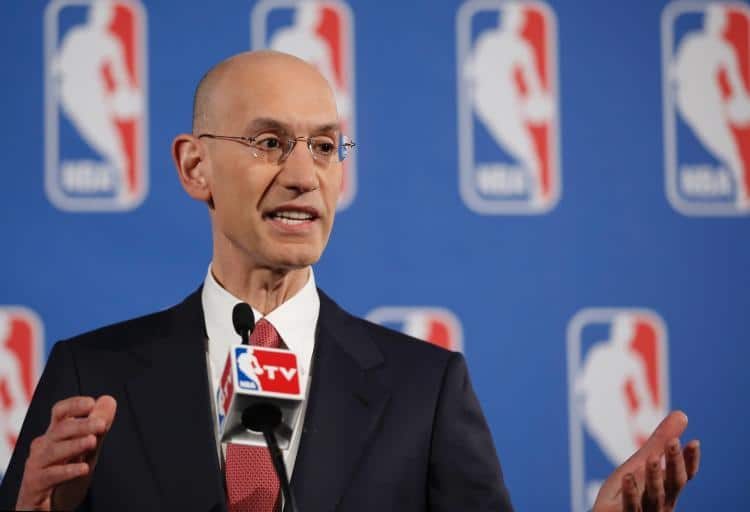 One of the fascinating aspects of the Supreme Court Sports Betting case (Christie v. NCAA) has been NBA commissioner Adam Silver’s public support for legal, regulated sports betting. New Jersey specifically mentioned Silver’s position and public comments in its opening brief in the Supreme Court (the state is identified in the legal docket by state governor Chris Christie).

In a panel dubbed “A View From the Top” at Harvard Law School (HLS) on Friday, attorneys and HLS grads representing three of the major sports leagues, which are all respondents in the Supreme Court case, offered their view of the case an how their respective leagues view sports betting.

Celtics Attorney on the NBA and Adam Silver’s View of Sports Betting: ‘This Is Going On. It Clearly Relates to All of Our Games. Why Aren’t We Sharing In That And Why Aren’t We Protecting Our Fans’

The panel included Dan Halem, chief legal officer of Major League Baseball; Jeff Pash, executive vice president of the National Football League; and Michael Zarren, the Boston Celtics basketball team’s assistant general manager and team counsel. They discussed a variety of issues touching on law and professional sports, but for our purposes we focus on sports betting, a subject the speakers addressed for 10 minutes, which you can view here (skip to 1:07:25) or read below for highlights:

Zarren mentioned daily fantasy sports, which exist in some quasi-legal gray area, saying, “It’s become exceedingly easy to place wagers of some sort on sporting events, regardless of what you call a wager.”

On Silver’s position on sports betting (publicly articulated in this November 2014 op-ed in the New York Times and at other times), Zarren said “[Silver] doesn’t really want to take a position on whether sports betting should be permitted or not. This isn’t a moral thing. But guess what, it’s happening.” He elaborated:

This is going on; it clearly relates to all of our games. Why aren’t we sharing in that and why aren’t we protecting our fans from some of the unsavory characters who might be profiting from this because it’s illegal?

There is this ‘for the good of the game’ argument that we shouldn’t have betting on games because players could be influenced to change what they do in games. But in many other jurisdictions in the world there is betting on games, there obviously have been some scandals — even here with things illegal — involving players manipulating games so the thought is the more regulation you have in this field, the easier it is to get data that will enable you to sniff out cheating in these things.

Zarren referenced a job he had before law school with the author of Freakonomics, when Zarren examined greyhound betting data to try to find cheating in greyhound racing. From that vantage he turned back to regulation and commercial opportunities:

[Sports betting] is much, much easier if it’s legal and regulated. And also you can start licensing these things and putting your logos on them and that makes the pie bigger for everyone.

I think that’s the commissioner and our leagues’ view in general: It’s kind of inevitable that sports wagering is going to become easier and easier through technological means, and absent some drastic change in liberties online, we might as well be participating in that market instead of watching it happen illicitly.

Toward the end of the talk, Pash discussed the Supreme Court case and what may unfold at the state level if PASPA gets ruled unconstitutional.

As practical matter, if New Jersey prevails in the Supreme Court, I think by the time Congress gets around to doing something about sports betting, you will have so many different types of laws and regulatory schemes  passed in the 50 states that… I don’t know what happens after the horse gets out of the barn, but that’s what will happen —  the horse will be so far away you won’t be able to see it. There’s no chance I think that Congress could put the genie back in the bottle.

For SportsHandle’s argument why the NFL actually wants to lose the case, which relates to many of the points discussed above, take a look here.