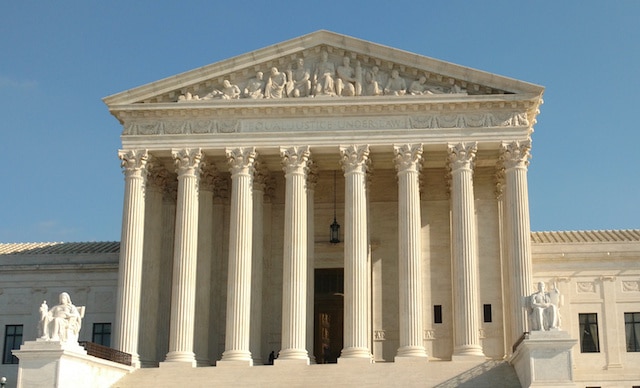 Outside the Supreme Court

The 1992 federal law banning sports betting outside of Nevada is history. The United States Supreme Court on Monday issued a 6-3 decision in Murphy v NCAA, ruling in favor of New Jersey in its battle against the NCAA and major professional sports leagues to overturn the ban, known as the Professional and Amateur Sports Protection Act (PASPA).

The fate of the law, which had banned all but Nevada from authorizing full-fledged sports betting, turned on 10th Amendment constitutional principles.

New Jersey has been preparing for a favorable decision and may be ready to take the state’s first legal sports bet as soon as two weeks from now. The Garden State is not the only (potential) beneficiary: since the start of 2018, lawmakers in roughly 20 states have introduced or passed legislation making sports betting legal, pending a change in federal law.

The legalization of sports gambling requires an important policy choice, but the choice is not ours to make.

Congress can regulate sports gambling directly, but if it elects not to do so, each State is free to act on its own. Our job is to interpret the law Congress has enacted and decide whether it is consistent with the Constitution. PASPA is not. PASPA ‘regulate[s] state governments’ regulation’ of their citizens, New York, 505 U. S., at 166. The Constitution gives Congress no such power. The judgment of the Third Circuit is reversed.”

PASPA made its way through Congress at a time when leagues were concerned about the “integrity of the game,” or the perception that their games might be compromised. Major League Baseball had recently banned all-time hits leader Pete Rose for gambling on games in which he played or managed, while the NCAA was about a decade removed from a point-shaving scandal involving Boston College.

Estimates of the amount of illegal sports wagers placed annually by U.S. citizens with offshore bookmakers or local bookies range from $150-$400 billion annually. Numerous states facing budget deficits are looking to migrate black-market sports wagering into legal frameworks, by licensing casinos and other establishments to operate sportsbooks on land and online, and tax it.

The high court also considered whether part of the law could be saved, but the court did not find any such alternative ground to uphold the law. Chief Justice Roberts, Justice Kennedy, Justice Thomas, Justice Kagan and Justice Gorsuch agreed with the majority opinion, as well as Justice Breyer who only dissented to a part of it.

“State legislatures are put under the direct control of Congress,” Alito wrote of PASPA for the majority. “It is as if federal officers were installed in state legislative chambers and were armed with the authority to stop legislators from voting on any offending proposals. A more direct affront to state sovereignty is not easy to imagine.”

Sensing a decision unfavorable for their interests, two of New Jersey’s foes in the case, the NBA and Major League Baseball, launched in January a far-reaching lobbying effort in states teeing up sports betting laws. The leagues now support legal, regulated sports betting, but only under conditions outlined in their “Model Sports Wagering Act.”

[Also See: Status of Sports Betting Bills Around the Nation as Sessions Wind Down]

Such conditions include the leagues getting a direct cut of all sports wagers in the form of a so-called “betting rights and integrity fee” or a royalty. The leagues have had some success (and some failures) influencing lawmakers to include their preferred provisions in part or in whole, but no state has yet passed a bill including any kind of royalty.

What’s Going to Happen Now in New Jersey and in Other States Looking to Legalize Sports Betting?

The Director of New Jersey’s Division of Gaming Enforcement has already invited casinos and their potential sportsbook partners to apply for a nonspecific gaming license. The MGM-owned Borgata, the leading casino in Atlantic City, has eyeballed a space on its property for a sportsbook and is making preparations.

Upon passage of a new sports betting bill, New Jersey’s horse tracks will be able to obtain licenses too and will act swiftly, as will the casinos in Atlantic City. Monmouth Park in Oceanport may need only two weeks to prepare to take a wager. From there, the casinos will offer patrons access to mobile sportsbooks through online platforms and apps. The state has regulations and licensure measures ready to go behind the scenes and they should move through the legislature quickly.

[Also see: What to Expect From the Coming Sports Betting Marketing Wave]

Numerous other states will be racing to market, too. West Virginia thumbed its nose at the NBA and MLB and passed the West Virginia Sports Lottery Act that taxes will allow the state’s five casinos to operate sportsbooks, taxing gross gaming revenue at 10%. Although Governor Jim Justice, who owns a casino that hosts a PGA Tour event, is attempting to broker a deal that would benefit the leagues.

Delaware was among the few states that PASPA allowed some limited sports betting. The “First State” is currently able to offer parlay wagering on NFL games. Residents can make those wagers at racetracks and more than 100 locations licensed by the state lottery. Pennsylvania also passed a sports betting bill in 2017 that taxes at a prohibitively high rate of 35%, but the state may nevertheless has sportsbooks and could be quick to market. Other states likely to roll out sports betting by the end of 2018 include Mississippi and possibly New York and Michigan.

This victory for New Jersey represents the culmination of a nearly decade-long effort against the sports leagues. New Jersey and the various states also looking to jump at the opportunity believe that the introduction of sportsbooks will boost foot traffic to their brick-and-mortar establishments, thus providing ancillary benefits to hotels and restaurants.

But many Nevada industry veterans have cautioned that sports betting — which gives the house a relatively low advantage and margin — won’t be the tax revenue windfall that some states are imagining.

The problem with PASPA was the way it told states how lawmakers could and could not enact or repeal laws, thus violating the “anti-commandeering” constitutional principle.

It’s still possible that Congress, which could have and theoretically still could outright ban sports wagering, will take another crack at creating a federal framework. The leagues, which recognize that sports betting enhances the value of their leagues and franchises, will surely lobby members of Congress for a favorable sports betting law at the federal level that states would  be able to opt-into. But to borrow a view from Jeff Pash, Executive Vice President of the NFL:

“As practical matter, if New Jersey prevails in the Supreme Court, I think by the time Congress gets around to doing something about sports betting, you will have so many different types of laws and regulatory schemes passed in the 50 states,” he said in November 2017. “I don’t know what happens after the horse gets out of the barn, but the horse will be so far away you won’t be able to see it.”

As of Monday, the horses are off.