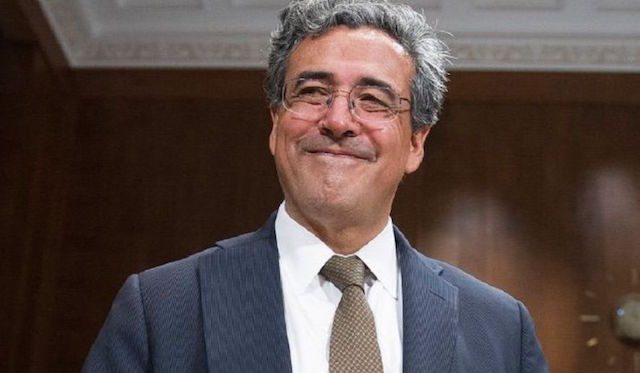 U.S. Solicitor General Noel Francisco filed a brief on Monday in the Supreme Court of the United States, in support of the NCAA, NFL and other professional sports leagues, which are backing the constitutionality of the 1992 law PASPA  that effectively bans sports betting outside Nevada. Petitioners in the case, the State of New Jersey and the New Jersey Thoroughbred Horsemen’s Association, argue on Tenth Amendment grounds that the law is unconstitutional.

One big question in the case (Christie v. NCAA) was whether Francisco, a President Donald Trump appointee confirmed by the Senate in September, would even file a brief. When New Jersey was seeking a writ of certiorari (to have the Supreme Court take the case), then-acting Solicitor General Jeffrey Wall submitted a brief at the request of the high court in which he told the court that it ought to deny the writ.

It is no surprise that Francisco, the government’s lawyer in Supreme Court cases, is supporting the federal law. The Solicitor General makes the case in similar fashion as the Leagues: By arguing that PASPA (the Professional and Amateur Sports Protection Act) does not affirmatively mandate New Jersey (or other states) to enact or enforce laws banning sports betting. The Solicitor General writes of PASPA, and state laws that would license or authorize private sports-gambling schemes:

Preempting those laws undoubtedly prevents some States from adopting their favored policies—indeed, that was the point. But Section 3702(1)’s preemption of state laws that conflict with federal policy is not impermissible commandeering because it does not compel the States to enact, maintain, or enforce federally prescribed regulations.

The Leagues’ brief focuses pretty heavily on the Supremacy Clause of the Constitution (federal law is law of the land) and so does Francisco. “The fact that preemptive federal legislation bars State’s preferred policy does not amount to impermissible commandeering. If it did, there would be little left of the Supremacy Clause.” Francisco writes elsewhere that “To allow New Jersey to avoid preemption by adopting the same substantive policy through a different formal mechanism would provide a roadmap for flouting the Supremacy Clause.”

The Solicitor General also spends quite a bit of effort discussing the “severability” of one of PASPA clauses, §3702(2), which makes it unlawful for “a person to sponsor, operate, advertise, or promote, pursuant to the law or compact of a governmental entity.”

Francisco argues that this clause could stand on its own without §3702(1), which prevents the state from licensing (or otherwise authorizing) sports betting operations. Francisco literally spells out how the court could accomplish this, which is quite unique. This is a point that New Jersey did not discuss in its opening brief and will likely have to address. The state has until about November 16 to file a brief replying and rebutting the Leagues’ arguments.

Hopes that President Trump’s previous ownership of Atlantic City casinos and vocal support for sports betting would lead to legalization in the state have so far have been misplaced. The Solicitor General acts as the government’s attorney here, not an agent for Trump’s views.

“I’m OK with [sports betting and daily fantasy sports] because it’s happening anyway” Trump told Colin Cowherd in 2015. “Whether you have [legalized sports betting] or you don’t have it, you have it.”

And here he is in 1993 backing sports betting:

Although there may be more pressing matters, like preventing a government shutdown, New Jersey legislators appear motivated to have Congress repeal PASPA and empower states to legalize sports betting if they so desire. Which New Jersey certainly does.