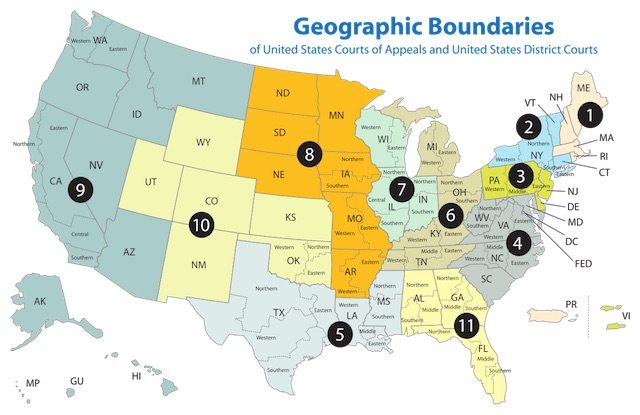 With oral argument in Christie v NCAA (aka the Supreme Court Sports Betting Case) just one week away (December 4), we’re taking stock of everything we’ve seen and read and know about the case. This includes the underlying law at issue, PASPA, the court’s attitudes about states’ rights, as well as the “record” from courts of appeals, including the Third Circuit Court of Appeals, where Christie v NCAA came from.

The fine folks at SCOTUS Blog, a site devoted to all things Supreme Court, compiles a “circuit scorecard” for every term that shows the number of cases accepted and decided from every circuit court of appeals (the U.S. is divided up into “circuits” or regions). The scorecards also show the number and frequency in which the high court has affirmed or reversed the lower court’s decision.

Ahead of Supreme Court Sports Betting Case (Christie v NCAA), Here’s the Rate of Reversal From Cases Arising From Each Circuit Court

In August 2010, President Barack Obama appointee Elena Kagan assumed office in the Supreme Court, replacing Justice John Paul Stevens. The composition of the court has remained the same in the seven terms that followed with one major exception: the loss of Associate Justice Antonin Scalia, who died in February 2016. He was replaced in April 2017 by Associate Justice Neil Gorsuch. In between, the bench was comprised of only eight Justices.

So here is the point: Using the SCOTUS Blog circuit scorecards, we compiled the number of cases decided from every circuit from the time of Justice Kagan’s appointment through the October 2016 term (which ended in June 2017). We tallied the scorecards to show the number of cases reversed and affirmed, and calculated the corresponding percentages.

Here’s the money question, which is the same that applies to the various “trend stats” you come across in the sports betting realm: What is the predictive value, if any, of this information? It’s unclear. Context matters. Does one circuit court err more often? Do cases rooted in one area of law (such as constitutional law) get reversed more frequently? We’re not exactly sure. So keep that in mind when you look at the raw numbers. Overall, the Chief Justice John Roberts court has reversed lower court decisions 70% of the time. The Third Circuit’s rate of reversal over the 2010-2016 span is a tick higher at 75%.

In Christie v NCAA, a reversal would mean holding that the Third Circuit erred in ruling New Jersey’s law “partially repealing” its prohibition of sports betting. And that would open the door to sports betting in New Jersey. The Supreme Court may determine that PASPA is unconstitutional, in whole or in part, which would allow other states to implement sports betting operations in their borders. It’s possible there’s a more nuanced decision. At this point all we can do is speculate and read some more tea leaves, if they present during oral argument.

The court is likely to issue it decision in April or May, possibly as early as March. Stay tuned.