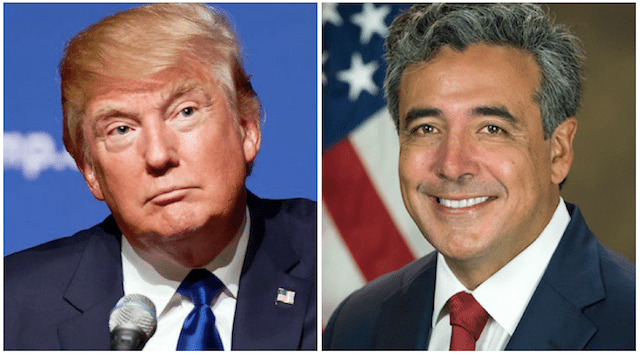 A popular notion when Donald Trump won the presidency last November was that he might help lift the ban on sports betting outside Nevada. While it’s possible the former casino magnate nudges Congress in that direction in the future, the Solicitor General (SG) is largely independent and often referred to as the Supreme Court’s “Tenth Justice.”

In the matter of Christie v NCAA (aka the “Supreme Court Betting Case”), Trump’s appointee for Solicitor General, attorney Noel Francisco, acts as an advocate for the government and its laws. And here the Solicitor General has filed a briefing defending the 1992 federal law banning sports betting outside Nevada (the Professional and Amateur Sports Protection Act, or PASPA). Francisco or another member of the Solicitor General’s office will also argue in the Supreme Court (SCOTUS), on December 4, that PASPA is constitutional — same as the NCAA and professional sports leagues.

So, Trump’s guy is in effect fighting to maintain the ban against New Jersey (on the docket as Christie), but there’s a bit more to it and how the SG will impact the case.

While the SG is a member of the executive branch and must consider the legal interests of the president and Attorney General, the SG is also an officer of the court tasked with defending laws passed by Congress (unless they are simply indefensible). And that’s what the SG is doing here with PASPA.

Regarding the SG’s decision to step into this case, legal scholar and sports law expert John Holden explained to SportsHandle:

“I think it would have been more telling if the Solicitor General did not get involved. That would make a real statement. Any time the federal government comes out and essentially says, ‘No, we’re not going to defend our own statute,’ that sends a message. So, to have the Solicitor General come out and say, ‘We believe PASPA’s a constitutional exercise. What we’ve done is perfectly valid,’ that’s not unexpected. If they did not come out and say that, that would be the surprise.”

Because the Solicitor General is supporting the leagues in this case, the SG’s allotted 10 minutes for oral argument will come from the leagues’ side, reducing league attorney Paul Clement’s time to 20 minutes. New Jersey’s attorney Ted Olson and co-petitioner’s attorney Ronald Riccio will go first during oral argument for 30 minutes (with a possibility of “reserving” some time and speak at the end).

Interestingly, both Olson and Clement are former Solicitor Generals under George W. Bush; Olson served from June 2001 to July 2004 and Clement immediately followed until June 2008. So this is a legal match in which three attorneys arguing have held the office.

There’s actually about 20 attorneys that comprise the Solicitor General’s office and they have three arguments in two days from December 4 to 5.  What’s the likelihood that Francisco himself argues?

“There’s a number of highly qualified lawyers in this office that I think may actually be more familiar with the case than Francisco,” Holden said.

If Francisco himself appears — and we may not know until late in the week or until that very day — it may signal something bigger from the executive branch regarding the underlying issue with PASPA — the federal government’s versus states’ rights. Marc Edelman, sports law expert and professor of law at the Zicklin School of Business, told SportsHandle:

If Noel Francisco argues, his presence serves as strong statement that the case’s outcome is especially important to the executive branch.  If such were the case, one would have to suspect that the executive branch’s interest is largely about preserving a narrow interpretation of commandeering clause for purposes of facilitating laws to disallow sanctuary cities and other federal-government heavy initiatives of the U.S. president.

This is all very interesting in that the Republican party has historically been in favor of state’s rights and a weak central government, but that does not seem to be President Trump’s view, even despite his party membership.

It helps the leagues’ side that the SG is backing PASPA’s constitutionality. Said Edelman: “In recent years, the Court has often, but not always, sided with the Solicitor General.”

But the nine Supreme Court justices will decide on the law’s fate based on their own interpretations.

What makes this whole thing even more interesting (if not peculiar) is that PASPA has enabled the leagues and the federal government to go to court to battle New Jersey’s efforts to legalize sports betting. But only the leagues have done so.

“With respect to the constitutionality of the Professional and Amateur Sports Protection Act,” Edelman explained, “the Solicitor General’s view will be interesting given that the United States has never once exercised its powers to bring an action under this act.”

It’s going to be quite a show, and SportsHandle will be there at the Supreme Court to bring you the blow-by-blow from these very experienced lawyers — once we can hook back up to WiFi outside the court.