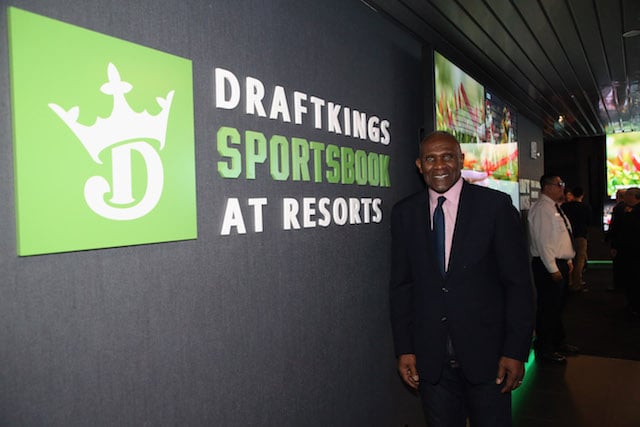 New York Giants Hall of Fame linebacker Harry Carson bet the New York Yankees to win the 2019 World Series on Tuesday morning, the first wager at DraftKings Sportsbook located at the Resorts Casino in Atlantic City.  It’s DraftKings’ first physical location in New Jersey and the first on the East Coast, as the Boston-headquartered company continues its push from an online-only operation into physical spaces.

The new sportsbook features 135 50-inch televisions and a video wall that is more than 1,000 square feet. Rows of club chairs sit in front of the video screen, with a bank of teller windows to the right, and a VIP Lounge to the left. According to the Nov. 14 DraftKings press release, the facility has five teller windows, a full bar, charger stations at each seat and bar-top electronic slot games. The chairs are set stadium-style to allow for unobstructed viewing.  The risk-management and trading operation, as well as the 12 sports betting kiosks, are powered by U.K.-based supplier Kambi Sports, which also powers DraftKings’ online sportsbook.

The Resorts-branded sportsbook that opened over the summer closed as of 11:59pm of Monday night.  According to a Resorts spokesperson, all vouchers and tickets for that sportsbook can be redeemed at the casino cage. (DraftKings Sportsbook cannot redeem them.)

Dennis Danzis of the Press of Atlantic City provides some video and images from inside the sportsbook:

Take a look at the new @DraftKings Sportsbook at @ResortsCasino pic.twitter.com/Kf1ejFfdIh

VIP lounge at the new @DraftKings Sportsbook at @ResortsCasino pic.twitter.com/ujLn1pdEGU

“We’ve been working for months with the team at Resorts to make sure the DraftKings retail sportsbook meets the highest bar for quality and customer experience,” said Matt Kalish, Chief Revenue Officer and co-founder of DraftKings. “We are tremendously excited to launch our first physical presence in the state with such a trusted partner, and to service their loyal patrons.”

According to the Associated Press, Mark Giannantonio, president of Resorts, said 150 workers have been building the DraftKings sportsbook for 2 1/2 months at a cost of several million dollars. The AP also reports that the sportsbook is situated in an area where patrons can access it via an entrance off the Atlantic City boardwalk.

The venue is the second of two that DraftKings has debuted in the past week. The first was at the at the Scarlet Pearl Casino in D’Iberville, Miss., on the state’s Gulf Coast.

Here is the first wager, made by Carson:

The first bet has been placed at the New DraftKings sportsbook at the Resorts Casino Hotel in Atlantic City. Giants legend Harry Carson did the honors. Took Yankees to win 2019 World Series. pic.twitter.com/SV7gEyUjvB

Hopefully Carson fares as well as former New Jersey senator Ray Lesniak, who in June made one of the first bets at Monmouth Park in New Jersey, wagering $50 on France to win the World Cup.  The French delivered, netting Lesniak $275.