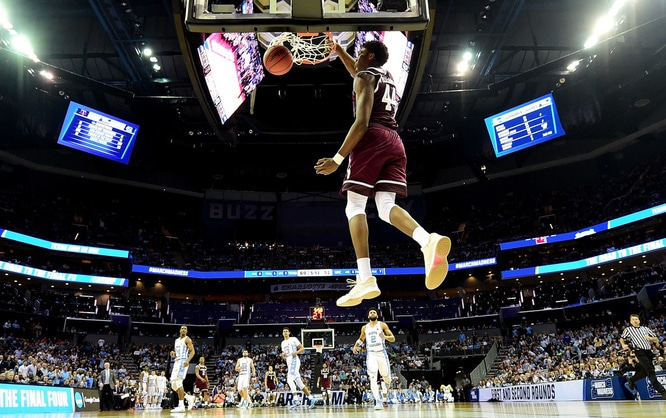 The SEC wasn’t great during college basketball’s regular season – I would argue only the Pac-12 was worse overall among Power 6 conferences — with the two usual powerhouses, Kentucky and Florida, both a bit down. The conference got a surprising eight teams, most in SEC history, in the Big Dance, but they combined for a disappointing 8-6 record in the first two rounds, with the regular-season co-champions, Auburn and Tennessee, both dropped in the Round of 32.

The only SEC schools left are its biggest basketball school, Kentucky, and one of its biggest football schools, Texas A&M. This writer believes both will move on to the Elite Eight. The Wildcats and Aggies also have a very realistic shot at meeting in the Final Four.  The four times the SEC has had two teams in the Final Four are 2014, 2006, 1996 and 1994.

Here are my two top ATS picks for Thursday’s Sweet 16 action. I’m passing on No. 11 Loyola-Chicago vs. No. 7 Nevada — even though I love the Wolf Pack to cover there; I just don’t find the matchup all that exciting — as well as No. 9 Florida State vs. No. 4 Gonzaga (like the Zags).

West Region game at 7:37 p.m. ET from Staples Center in Los Angeles with the winner facing, in my opinion, Gonzaga. The Wolverines were Big Ten Tournament champions and have won 11 straight games. John Beilein is a magician in March when his team his favored. In the last 10 years, UM 18-1 SU and 12-6-1 ATS as chalk on a neutral court in the March (or April). All but one of those games was played under Beilein.

Shooting under 30% from 3-point range will not cut it vs. the Aggies because they are going to dominate down low with their NBA frontcourt duo of 6-foot-10 junior Tyler Davis and 6-foot-10 sophomore Robert Williams. They combined for 27 points, 29 rebounds and four blocks in a close Round 1 win vs. Providence and then 26 points, 22 rebounds and five blocks in the shocking blowout of defending national champion North Carolina in the Round of 32. Freshman point guard T.J. Davis also has raised his game.

The Aggies started SEC play 0-5 because of injuries/suspensions, and they can be streaky in both ways. But their only loss in the past six games was on a buzzer-beater by Alabama’s Collin Sexton in the SEC Tournament. This is not a fluke.

South Region Wildcats Invitational with a tip of 9:37 p.m. ET from Atlanta – so basically a home game for Kentucky, although almost every neutral-site court is a home game for the Wildcats because Big Blue Nation travels so well. The winner here likely faces Nevada on Saturday.

It’s ridiculous how opened up this region has become for Kentucky after John Calipari complained loudly about his SEC Tournament champions’ original path to the Final Four that figured to include Arizona, Virginia and Cincinnati after an opening-round game vs. Davidson. Think Coach Cal’s happy now? He won’t see a seed lower than No. 7 before San Antonio.

The best freshman point guard in this tournament, maybe freshman overall, has not been Trae Young (Oklahoma) or Collin Sexton (Alabama) but UK’s Shai Gilgeous-Alexander. He has averaged 23.0 points, 7.0 rebounds and 6.5 assists in wins over Davidson and Buffalo. Perhaps no player has raised his potential 2018 draft stock more. In addition, freshman forward Kevin Knox, the highest-rated recruit in this class, also is shining at the right time. Kentucky’s 3-point defense is the best of any team left in the field as it holds foes to 29.8 percent shooting from beyond the arc.

Frankly, though, this is more about what I believe is a mediocre-at-best KSU team. Yes, the Big 12 is better than the SEC this season, but KSU looked blah in a 10-point first-round win over Creighton and then offensively horrific in a 50-43 win over Cinderella UMBC. You aren’t supposed to win an NCAA Tournament game shooting 1-for-12 from deep.

To be fair to K-State, it hasn’t had star Dean Wade in the Big Dance due to a foot injury. He expects to play Thursday (“98 percent sure”), but even if he does he surely won’t be at full strength. The all-Big 12 forward averaged 16.5 points and 6.3 rebounds this season. K-State needs him because Kentucky might have the biggest frontcourt it has faced this season.

UK has a 9-0 all-time record against Kansas State and is 6-0 all-time in the Sweet 16 under Calipari. Kentucky has covered five straight games, while KSU is just 1-5 ATS in its past six non-conference matchups.