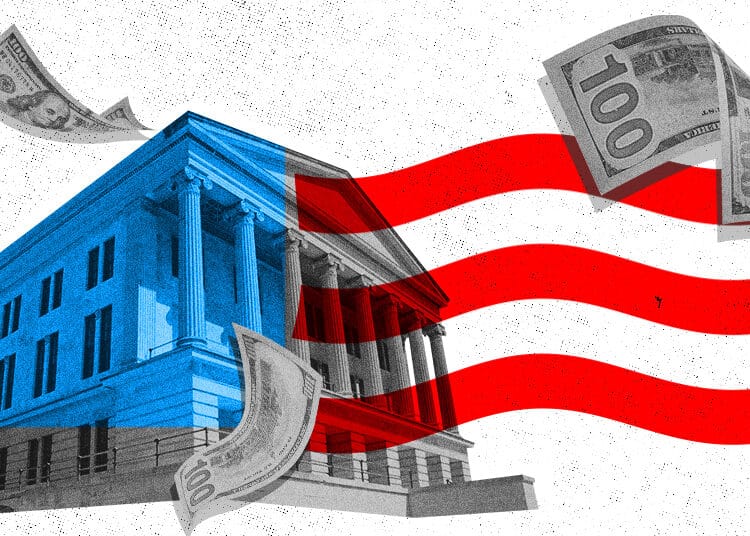 When New York published its full mobile figures for October on Thursday, state taxes generated from operators’ adjusted revenue nationwide surpassed $1 billion in a calendar year for the first time ever. The Empire State was an outsized contributor, accounting for more than half the total amount thanks to its 51% tax rate.

FanDuel made the largest contribution among operators paying those taxes in large part due to its status as the first mover and market share leader in the single-game parlay space. The sportsbook has revolutionized the way a sizable portion of sports betting takes place and is significantly contributing to higher operator win rates — which spun both revenue and tax receipt totals higher at a faster clip than expected. 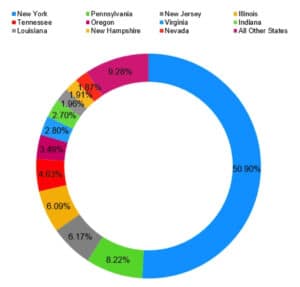 Forget gross revenue for a moment; this is about adjusted revenue — the total upon which states can levy taxes after accounting for promotional credits and deductions including the federal excise tax. Since Aug. 1, operators have accumulated more than $1.4 billion in adjusted revenue while posting a 9.9% hold. To put this figure in some perspective, the adjusted revenue for all of 2019 when 13 states were accepting bets at year’s end totaled $886 million with a hold of 6.7%.

The summer-into-fall surge generated more than $364 million in tax receipts in that span, and September’s coffer-busting record of $158.8 million — already $30 million beyond the total from January, the month in which New York began realizing its status as a mobile betting leviathan — will get one last eight-figure revision upward after Arizona and Illinois enter the ledger.

Since no two states are truly alike when it comes to sports betting, no two states generate tax revenue the same way. Using $20 million as an entry point, here are the 11 states that have contributed the most to making this billion-dollar baby. 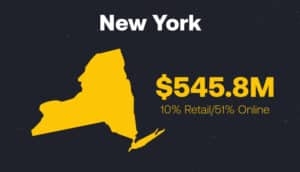 The Empire State’s “go big or go home” approach for taxing mobile revenue proved a huge success for the state, especially in contrast to its pedestrian 10% levy on retail revenue. Many scoffed when then-Gov. Andrew Cuomo said New York could reap $500 million annually from mobile betting, but the state’s nine online operators proved him right, needing just 10 months to hit that target. There continues to be chatter about possibly reducing the tax rate and admitting more operators, but for now, New York is the runaway leader in tax receipts, just like it is for handle and revenue. 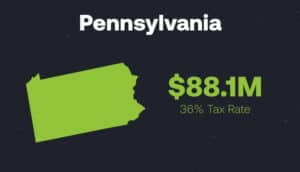 A state with both a high tax rate and a high allowance of promotional deductions for operators, Pennsylvania proves sports wagering can be both government-friendly and operator-friendly. The $88 million in receipts through September is slightly ahead of last year’s pace, when the Keystone State finished with more than $115 million. Even with the eventual nine-figure amount expected in 2022, Pennsylvania is still leaving plenty of money on the table: Operators have set aside more than $140 million in promotions and other deductions, which meant the state missed out on over $50 million in additional tax receipts. 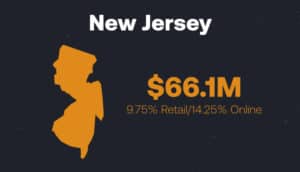 One of the earliest on the sports wagering scene, the Garden State’s relatively industry-friendly tax rates of 9.75% for retail revenue and 14.25% online means operators need to have a big month in order for the state to have a big month. This year has been fairly good to both, with four monthly tax bills exceeding $8 million and September’s reaching eight figures ($12.1 million) for just the fifth time since launch in 2018. New Jersey will need a good fourth quarter by the house, however, to make it back-to-back years with $100 million in tax receipts. 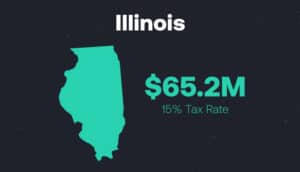 The state with the Second City isn’t far from second place in tax revenue. Illinois is usually duking it out with New Jersey for third and occasionally sneaking past Pennsylvania for second. The 15% rate on adjusted revenue is on the upper range of reasonable. considering operators cannot deduct promotional play. The Land of Lincoln has seen two months this year with $10 million in receipts and a third fall less than $70,000 shy of the mark. Given the popularity of parlay wagering in Illinois and the high holds it creates, Illinois has a shot at $100 million in receipts by year’s end. 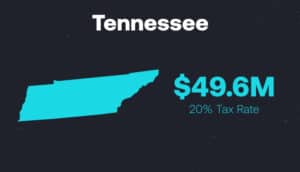 While much of the attention about the business side of sports wagering in Tennessee revolves around the state-mandated 10% hold, the Volunteer State’s 20% tax rate on the all-digital enterprise helps the state punch above its weight for revenue rankings when compared to its handle and revenue figures. Coupled with a lighter promotional spend among operators in 2022 versus 2021, Tennessee has already surpassed its tax receipts from last year and may clear $60 million for the calendar year. 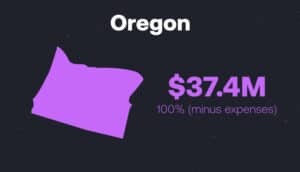 The highest-ranked state that is lottery-run (though DraftKings has conducted sports wagering on the Oregon Lottery’s behalf since January), the Beaver State cracks the top 10 on the strength of getting to keep 100% of the revenue minus expenses. Even with no wagering permitted on college sports, Oregon’s handle has increased notably compared to 2021. The transition to DraftKings in January has been seamless — the 9.5% hold is tracking to be slightly higher than last year. 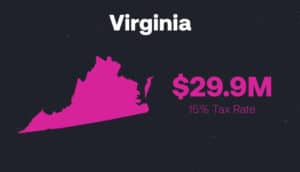 The Old Dominion cracked the top 10 with a late surge that paired a strong summer by operators and a budget amendment change regarding promotional revenue. Operators who have been conducting business in Virginia for more than 12 months are no longer permitted to deduct promotional play, and the impact was immediate.

The $14.8 million collected from July to September accounted for close to 50% of the nearly $30 million that filled state coffers thus far this year. As more operators work through their negative adjusted revenue carryovers, Virginia’s year-end total should surpass $40 million thanks to its 15% tax rate. 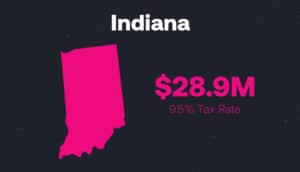 Indiana does not immediately spring to mind for top sports wagering handle generators, but the Hoosier State sneaks pretty high up the tax revenue rankings. Indiana is a state where bettors love their teams, can still draw (for now) from Ohio and Kentucky, and have plenty of mobile operators and brick-and-mortar sportsbooks to choose from.

Indiana also has an industry-friendly tax rate of 9.5%, which means promotional deductions are not vital for operators. Solid year-over-year handle growth has contributed to strong revenue performance — September marked the first time operators cleared $50 million in monthly revenue. Indiana cleared $25 million in tax revenue for the year in October and would appear on its way past $30 million and to a new full-year record for the state. 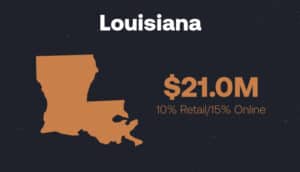 A relative newcomer after launching last fall before cranking up mobile wagering in January, the Pelican State has reasonable varying tax rates for retail (10%) and mobile (15%). Overall operator performance has swung wildly from month to month for most of 2022, but Louisiana‘s decision to limit mobile operators to $5 million in promotional spend per year has proven to be a masterstroke when it comes to tax receipts.

Operators burned through most of their promotional kitty in January and February with introductory offers. When the house fared well in March, May, July, and September — all months with at least $20 million in gross revenue — adjusted revenue was 96% or higher each month. That contributed to Louisiana clearing $20 million in taxes despite more than $21 million in promotional deductions the first two months of the year. 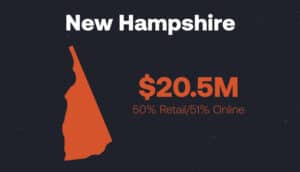 A lottery-run state like Oregon, New Hampshire is also a DraftKings-run state when it comes to sports wagering, though the revenue split is more even between the two sides. The Granite State also has been the beneficiary of neighboring Massachusetts’ glacial pace when it comes to crafting rules and regulations to launch, with many people making the drive over the state line. Five of New Hampshire’s top seven all-time monthly revenue totals have come in 2022. The $20 million in tax receipts this year have surpassed all of 2021, and clearing $25 million is a likely outcome over the final three months. 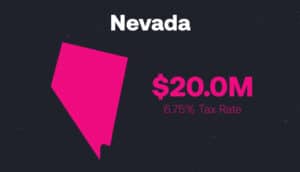 Can you really have any sort of sports wagering revenue list without Nevada? Yes, New York, New Jersey, and Illinois now surpass the Silver State in handle on a consistent basis. And yes, the house had taken it on the chin in the Silver State for all of 2022 before getting off the mat in September. 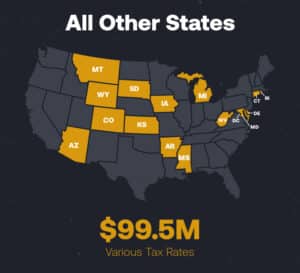 Other states and jurisdictions

Three large-handle states — Arizona, Colorado, and Michigan — are among the biggest contributors in this group, but each state allows operators to deduct significant amounts or promotional revenue and/or lets them carry over negative adjusted revenue totals from month to month. This is most prevalent in the Wolverine State, where some operators still have not paid any state tax since launching in January 2021 on top of an already-low tax rate of 8.4%.

Colorado will enact a change in how promotional revenue is deducted come the new year, while Arizona will likely reach $20 million in tax receipts with either October or November’s report. Rhode Island is also nearing $20 million in tax revenue, but like New Hampshire, the Ocean State will be negatively impacted when Massachusetts launches.

Wagering is still just retail in Maryland, making the nearly $5 million in tax receipts underwhelming. Mobile wagering is close to launch and will make the Old Line State competitive with both Virginia and Washington, D.C. The nation’s capital, though, continues to be roiled by the general inefficiency of GambetDC, to the point where legislation is being crafted to further open the playing field.

With Arkansas recently introducing mobile, 2023 will make an interesting case study with neighboring Mississippi given the Magnolia State only allows mobile betting on casino grounds. Both states have generated less than $5 million in tax receipts this year. Iowa is quietly humming along, but its 6.75% tax rate matches Nevada for the national low and means it is leaving some meat on the bone for receipts despite finally achieving back-to-back months with $1 million tax revenue.

Last on the scorecard is South Dakota. The action in Deadwood may not rival Las Vegas, Atlantic City, or even Iowa City, but it did generate $47,364 in state tax revenue — approximately 0.004% of this bountiful levy.