by Bennett Conlin
in Features 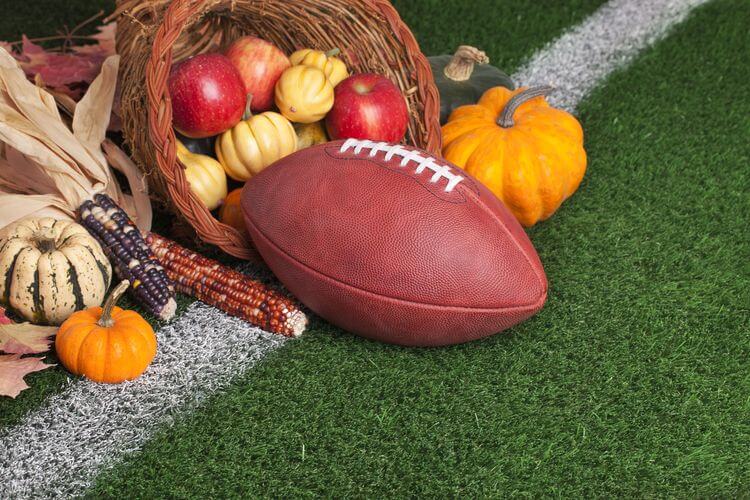 A recent survey conducted by OnePoll on behalf of Tipico Sportsbook asked 2,400 Americans who regularly watch or attend sporting events about family rivalries and superstitions. The survey found that 71% of respondents feel stakes of a game are higher when watching with friends and family. That could make for intense Thanksgiving Day football viewing parties, as well as some heated weekends with a full slate of NFL games and college football rivalries ahead.

“From pro football on Thanksgiving Day to college football rivalries like Auburn/Alabama and Ohio State/Michigan that take us into the weekend, families butting heads is an age-old holiday tradition,” Andre Zammit, VP Sportbook at Tipico, US told Sports Handle via email. “In fact, 55% of fans in our survey say it’s more fun to watch sports with their friends that like rival teams, and 41% have gotten into an argument with a friend or family member while watching or attending a sporting event on Thanksgiving. 45% had to actually leave early because of the confrontation.”

Here’s to hoping you can stay in the 55%, avoiding an early Thanksgiving departure.

According to the survey, intense arguments are possible — perhaps probable — even if sports betting isn’t involved. Wagers can certainly add to the drama of a matchup this weekend.

A busy week could lead to heightened emotions

It’s a jam-packed week for sports fans, especially those who love football. There are three Thanksgiving Day NFL games, headlined by matchups between the Las Vegas Raiders (5-5) and Dallas Cowboys (7-3) and Buffalo Bills (6-4) and New Orleans Saints (5-5).

We're two days away from 20 million people complaining about the Bears-Lions matchup while choosing to watch it rather than talk to their families.

All three Thanksgiving NFL games are expected to be reasonably competitive, with BetMGM, Caesars, DraftKings, and FanDuel all listing spreads for the games at 7 points or fewer.

Unfortunately for Bears and Lions fans wishing their teams were in the playoff picture, they likely won’t be free from good-natured needling this weekend.

“Our loved ones truly know how to get under our skin and thrive on doing so,” Zammit said. “66% agreed that they purposely antagonize family and friends when they support an opposing or rival team.”

For fans of Michigan teams, it’s a huge week. In addition to the Lions playing on Thanksgiving, Michigan hosts Ohio State in a game with major College Football Playoff implications. The Wolverines have lost eight consecutive games to the Buckeyes, and they’re about a touchdown underdog this weekend. Michigan State ends the season by hosting Penn State.

The NHL and NBA are also in action this week, and plenty of early season college basketball tournaments are taking place. A loaded schedule could lead to tempers flaring. Tipico says 35% of survey respondents have broken a TV remote, and 30% damaged TVs in frustration at sporting event results.

If you’re going to pick one of those two, the remote seems like the less costly option.

Thanksgiving also brings with it the potential for superstitious activity from die-hard fans. According to the survey, 55% of respondents believe it’s bad luck to tell a bettor he’s won before the outcome has been determined.

“For the 55% who believe it’s bad luck if someone says ‘You can’t lose’ or ‘It’s a lock,’ Tipico recommends keeping that information to yourself to avoid fueling your family with any more ammo,” Zammit said.

Just over 60% of survey respondents blame themselves for their team’s defeats. In some cases, they’re branded “The Mush” by family and friends. Half of respondents wear a specific jersey every time their team plays, and 38% even said they won’t wash their game-day jersey until the season concludes.

Sports Handle recommends those respondents reevaluate that habit. Come on, people. It’s not the washing machine’s fault that your franchise stinks.

The survey also shared that 38% of people believe friends or family members are “bad luck” when it comes to sports, and the majority of those people may leave the Thanksgiving viewing party or ask the person bringing the back luck to watch in a different room.

Fun fact: After the 4 sck game in 2019 against the hawks, I put my cleats in my bedroom closet for memorabilia.. Saturday morning l dug those bad boys out blew the dust off em and packed them for the trip! Same laces, soles and all lol.. #superstitious

Superstitions and tempers aside, Tipico suggests keeping the games and results in perspective. After limited gatherings the last year or so due to the pandemic, it’s nice to watch and argue about sports in person again.

“We know the stakes are higher when you watch with family, 71% said so, but at the end of the day, family and friends are what’s most important at the holidays, and we’re all excited to experience more of that normal this year,” Zammit said.