Disclaimer: We used Google Keyword Planner to get the search volume for NHL teams all across the world for this piece. As the Montreal Canadiens (and associated) keywords are removed by Google for search volume data, we have not included any data concerning them.

With the Edmonton Oilers in a rut, a trade deadline looming and players and journalists at each other’s throats – we’re definitely in the midst of hockey season.

The NHL might not enjoy the same worldwide popularity as its major league brethren – the NBA and the NFL – but you’ll be surprised to know that NHL franchises are not a hot topic only inside US and Canada sportsbooks.

We researched google search volumes for all countries to find out the most searched teams across the world and here are the interesting results: 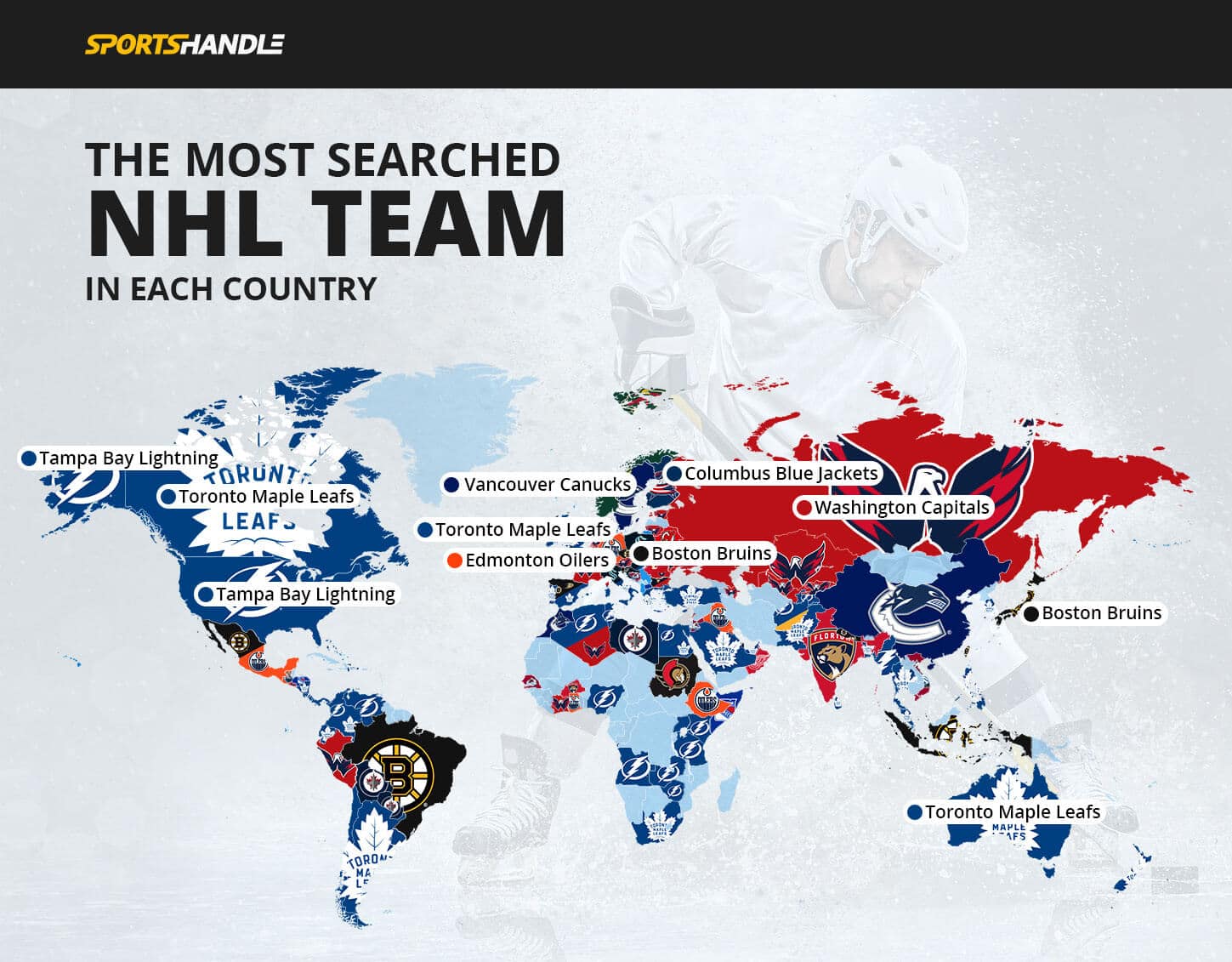 ‘Canada’s team’ is the team of the world

The Toronto Maple Leafs are the most popular team in Canada (no surprises there!) but they also lead the way in terms of searches in most countries across the world.

There were 1,500,000 searches for the Maple Leafs in all of the Canadian provinces, including Ontario, Alberta and British Colombia – the most of any NHL team. The Leafs were also the most searched team in 28 other countries (36,660 searches) with the UK being the country with the second highest number of searches for the Leafs – 18,100.

We mentioned earlier that we couldn’t get search volume for the Montreal Canadiens as the keyword is removed from Google Keyword Planner. The keyword ‘Montreal Canada’, however, did have 1,220,000 searches in Canada.

Considering historical success, and market size, it was interesting to note that the Tampa Bay Lightning were the most searched for team in the United States, rather than the Pittsburgh Penguins, Boston Bruins or the Chicago Blackhawks.

Back to back Stanley Cups (2020, 2021) definitely are the major contributors to the Lightning who were searched for 823,000 times in the US.

Player nationality and team search has a strong correlation

Thus, the Washington Capitals being the most searched team in Russia, is not a surprise. What is surprising is that the Capitals rank second in terms of teams searched by most number of countries in the world.

The Capitals are the most searched for NHL team in 16 countries including Russia, and most of them are in Eastern Europe. The country with the second highest number of searches for the Capitals is Slovakia, and it makes sense, considering Martin Feharvary skates for a living in DC.

This correlation also shows up in Germany where the Edmonton Oilers are the most searched team with 27,100 searches.

Having Leon Draisatl, the prodigious German talent, helps. His 2019-20 season where he won the Art Ross, the Hart Memorial and the Ted Lindsay trophies has helped raise the profile of the Oilers in Germany.

Elias Pettersson and the Vancouver Canucks’ search volume in Sweden, David Pastrnak and the Bruins as the most searched team in the Czech Republic, Patrik Laine and the Columbus Blue Jackets in Finland – there is a strong pattern.

We also checked for the most searched NHL players in Canada and the US and were surprised to see that Wayne Gretzky garners more google searches, overall, than Connor McDavid and Sidney Crosby (the most searched active players).

Gretzky has rightly been called the GOAT of hockey and the fact that he is still searched for so much attests to his legacy.

When using this data and research, please attribute by linking to this study and citing https://sportshandle.com/

ShareTweetShare
No Result
View All Result