The Story Behind the Sports Betting Photo Seen Everywhere

by John Wilson
in Features 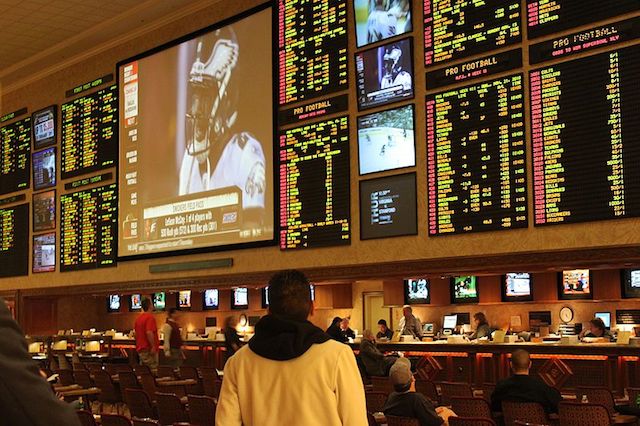 If you have read more than a few stories about sports wagering, odds are you have seen the picture above. It was taken on the night of Nov. 15, 2010 at the Mandalay Bay Race & Sports Book on the Las Vegas Strip, when the Michael Vick and Andy Reid-led Philadelphia Eagles annihilated the Washington Redskins by a score of 59-28, during Donovan McNabb’s first and only season in Washington.

The moment was frozen in time by Baishampayan Ghose, a technology entrepreneur (or startup founder) by trade, who at the time was on a roadtrip from San Francisco through Las Vegas. “I think I had spent a few days on The Strip checking out Las Vegas,” Ghose told Sports Handle in an e-mail.

Since then, here is a sampling of websites on which the photo has appeared: Sports Insights, The Postgame, Complex, Vice Sports, the Libertarian-minded website Reason, The Chive, Kentucky’s NPR affiliate WKMS, likewise Nevada’s NPR affiliate KNPR. It’s been featured in the International Business Times, on SCOTUSblog, Gaming Today, Cardplayer, as the icon photo for Twitter user bettingresource and it’s even the main Wikipedia image under the article on sports betting.

Taken by hobbyist photographer in 2010

Ghose himself is not a sports bettor. He’s a tech guy who was living and working in San Francisco at the time. “Photography is something I have done from time to time as a hobby,” he said.

Ghose captured the image to signify a “general sports bettor” intently looking at the betting boards. We’ll call the man in the foreground “Bettor X.” Sports Handle tried unsuccessfully to track down Bettor X. (And if you are that person, please reach us at info@sportshandle.com).

“The reason I took it was to highlight the meta-ness of the situation: that there is sports betting played on top of other sports, such as football,” Ghose said. “Some people love football, but many others just care about being able to predict the outcome of the game, and probably don’t care as much about the game itself.”

Hit the nail right on the head. Which bucket does Bettor X fall into? Lover of the game, a bettor looking to predict the the outcome of game and pocket a few bills before heading home after a Las Vegas weekend? Maybe he’s both — an Eagles fan who hopefully backed his hometown team and the “over.”

At the time Ghose snapped the image, Bettor X’s fortunes were yet to be determined. That’s former Eagles and now Buffalo Bills running back LeSean McCoy captured on the giant television. The game had not yet started.  By the end of the first quarter of the Monday Night Football game, the Eagles had mounted a 28-0 lead.

Ghose, then age 27, provided his take on what he thought Bettor X was thinking about as he was staring intently at the TV screens and betting menus.

“There must have been a lot going on in his mind regarding the outcome of the game and all the events in the game that could be bet on. These guys have real money riding on it, so the stress must be at a different level.”

Ghose added that, “It’s interesting how something designed primarily for entertainment is also a source of income for so many people indirectly. It was interesting for me to observe first-hand. It was my first time experiencing sports betting at such a large scale, so I was quite intrigued then.”

The reason why the photo became so popular? Ghose attributes that to “the liberal, simple, and explicit license…apart from it being a decent picture.”

What he means is that his photograph is licensed under the Creative Commons Attribution-ShareAlike license, which allows anyone to use the picture freely for any kind of commercial purpose as long as they give the creator credit for the photograph.

It was and is a good picture, and gained popularity due to its free licensing so that everyone may use it as long as they give Ghose the credit he deserves. Like the old saying, if it’s free, it’s for me.

Ghose is now 35 and lives in Pune, India. You can find more of his photographs here and who knows, you might come across another hidden gem that starts a ripple in an industry, but if you do just make sure to give Ghose his credit.