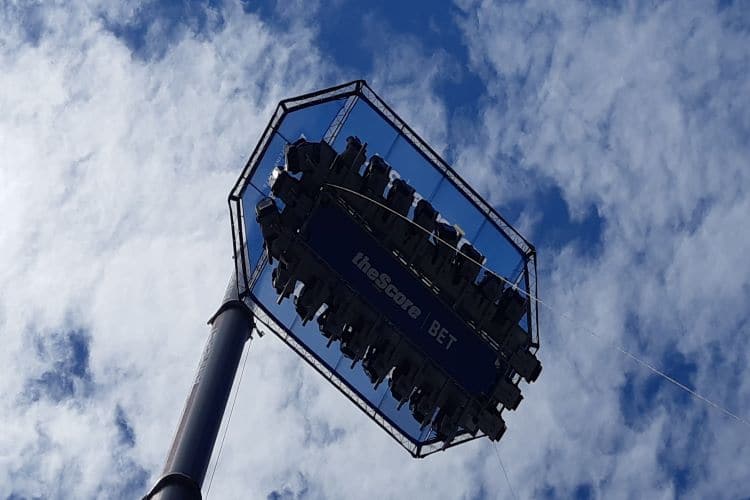 How do you take the sports betting experience to new heights? Well, theScore Bet is literally doing that at this year’s RBC Canadian Open PGA Tour event.

Nearly a week prior to the event, theScore Bet put out a press release with a rendering of its “Skyline Seats” for the tournament, which immediately went viral on social media across Canada. Nothing like this has been done before at a sporting event in the country, so I knew I had to check it out.

The tournament is put on by Golf Canada, which has theScore Bet as its official gaming partner. The Toronto-based sportsbook, which launched in Ontario on April 4, is providing a first-of-its-kind, on-course viewing/dining experience for its users. The Skyline Seats hoist harnessed fans up to 100 feet above the St. George’s Golf and Country Club near the 1st and 18th holes to enjoy views of the grounds and nearby Toronto.

It is the highlight of the sportsbook’s various promotions around the golf course, including a putting challenge and a members lounge.

Who's ready to touch the sky with @theScoreBet Skyline Seats!? 🔥 https://t.co/vV7fzDYiu4

A play-by-play of the experience

I’m not great with heights, especially if my feet are dangling 100 feet in the air and the seats recline. I elected to forego the Skyline Seats, but I attempted to live the experience vicariously through a group of excited people who chose to be hoisted Thursday afternoon.

Admittedly, I let a couple of old guys get in my head about the experience as I entered the grounds. Upon arrival, I walked up to the security gate alongside a group of men, all of them ranging from roughly 60-75 years old, and overheard one of them saying, “What the hell is that thing?”

“I wouldn’t be caught dead going up in that,” another said. “F**king technology these days. Not even the golf course is sacred anymore. Are they trying to turn this event into a carnival?!”

I made my way toward the large onsite crane, a clear indicator of where the Skyline Seats were located, and spoke with Julie Connolly, who’s in charge of the Dinner in the Sky team providing theScore Bet’s branded experience.

Dinner in the Sky, which was founded in Belgium 16 years ago, is currently hoisting people for a unique dining experience in 67 countries around the world. I asked her if any of the patrons have had any safety concerns.

“It’s extremely stable,” she assured. “It goes straight up, and then it gently spins, and then it comes down. It’s a very gentle ride. In fact, many people have described it as ‘peaceful.’ There’s not very much to be afraid of, really.”

Guests have to sign a waiver and have their theScore Bet accounts verified before being strapped into their dining chairs, and then they’re given a quick safety rundown by the friendly staff.

“I’m not nervous at all. I’m excited. It looks pretty stable,” a man named Jordan told me minutes before he was strapped in with his friend Emil.

“We knew about it before we got here through the app,” Emil explained. “We follow a couple of the golf guys: Adam Stanley and Bob Weeks. They posted on social about it, so we looked into how we could get on and wanted to do whatever it took to get on.”

As more guests arrived and got strapped in, Aubrey Levy, vice president of content and marketing for theScore Bet, appeared out of nowhere and jumped into one of the seats with a CTV news reporter harnessed in beside him.

@theScoreBet's Aubrey Levy looking perhaps a touch nervous before being raised up in the "Skyline Seats" at the @RBCCanadianOpen. Users are enjoying great views and cold drinks at the top. pic.twitter.com/LseG7eorMC

Shortly thereafter, the seating platform was raised gradually into the sky by a large crane and the guests hollered with excitement.

Once the platform was raised to around 100 feet in the air, it gently spun to give guests views of the Toronto skyline. The sky bar was opened, and you could hear lots of laughing from above. After about 30 minutes, the crane lowered the platform slowly, signaling the imminent conclusion of the experience.

Once back on the ground, guests animatedly began describing the experience.

“That view was awesome! Totally worth it,” one guest shouted.

Many others departed the loading area with big smiles on their faces and quickly ran back to the golf course to take in more action. Nobody had dropped a hat, sunglasses, a phone, or anything else from up above. But I did notice a few people darting to the restroom after being suspended in the air for 30 minutes.

How the idea came together

Asked how the idea came up for this year’s Canadian Open, Levy said it took months of planning to work out the logistics with Dinner in the Sky, Golf Canada, the PGA Tour, and the golf course, but everyone pulled together to make it happen.

“We asked ourselves how do we help fans get more into the action, bring betting and media closer together, and enhance the fan experience,” he explained. “We threw a bunch of stuff at the wall, and one of the ideas was: How do we improve the vantage point of watching a golf tournament? You’re either running around the course watching matchups, or you’re well positioned on the course and you watch the groups play through the hole.

“What if we had a certain vantage point of watching [the golfers] from the air? Everybody thought, that would fit perfectly. It’s exciting, it’s outside-of-the-box. That works for our brand, our ‘Bet Mode’ campaign, and the only question was: Would we be able to do it? How do we pull this off?”

And of course, he had to finish this thought by poking some fun at me for being too chicken to go up.

“It’s a pretty great experience up there, when you actually go up,” he said with a huge grin on his face.

More will be coming from theScore Bet in regard to its sportsbook user and fan engagement. Just after the regulated iGaming market launch on April 4, theScore Bet announced a partnership with the Toronto Blue Jays, Canada’s only Major League Baseball team.

“When we do partnerships, like with Golf Canada or with the Blue Jays, the core essence of the partnership is do we have the full buy-in with us, and the team, or the event, to be able to create amazing things. We have a 10-year exclusive deal with the Jays. You’ve yet to see us do much by way of activation. But watch for us to use the same creativity strategy to create new and unique activations for Jays fans.”

This activation hosted by theScore Bet was also an excellent opportunity to speak with some Ontario bettors about their betting habits, and to get some early feedback on sportsbook apps available in the province.

Most people said they are using three to five different sportsbooks to place wagers. The bettors present for the Skyline Seats experience were obviously users of theScore Bet’s mobile app, and they had some mixed reviews.

“I don’t like that we couldn’t live-bet the golf today,” one guest commented. “They’re covering the event and are one of the sponsors, and bet365 will let you live-bet per hole, or per 3-ball, or whatnot. The only bets I placed were before the round started.”

He said he’d been wagering with bet365 for the last two years prior to the launch of the regulated market, and added that theScore Bet app “works significantly better than bet365. The app is very smooth. But I think it’s still very limited in what you can bet on.”

A few people around the golf course also said they were already using theScore’s sports app prior to the launch of theScore Bet on April 4. The ability to convert users to sports betting from the sports app, which has over 4 million monthly users, is a big advantage.

“I’m fairly new to the sports betting world. It’s only my second my experience with a sportsbook app. I found it simple. I appreciated the presentation process,” another guest told me when asked what he liked about theScore Bet. He also had the DraftKings app downloaded on his mobile phone.

So, what kind of golf wagers were bettors placing while at the course Thursday?

How is theScore faring in Ontario?

Release of revenue numbers is still awaited from Ontario’s regulators, who said at this week’s Canadian Gaming Summit in Toronto that those figures will be “released very soon.”

Although those numbers will be the best indicator of how sportsbooks are faring since the launch of the regulated market, theScore Bet was one of the most-downloaded sportsbook apps in April. Many operators in Ontario have an uphill battle gaining market share against the gray market operators, who have been active for years across Canada.

It was also recently announced that theScore Bet will be ceasing its sports betting operations in the United States, effective July 1, to focus on Canada. Now owned by Penn National Gaming, theScore Bet has been accepting wagers from bettors in New Jersey, Iowa, Colorado, and Indiana. Once the sportsbook migrates to its own risk and trading platform in the near future, the in-play wagering options will be plentiful for bettors.

TheScore’s bigger brand recognition in Ontario, though, was apparent from speaking with a few people at the RBC Canadian Open.

One spectator, when asked how he knew about theScore, said, “They used to have the best sports highlights, man!” The company initially launched as a national cable TV station in 1997 before it was sold to Rogers Media. TheScore then relaunched and rebranded as a successful digital sports media company.

As of Friday afternoon, 29 iGaming sites were live in Ontario. Regulators are expecting more than 70 operators to be live in the province by the end of the year.