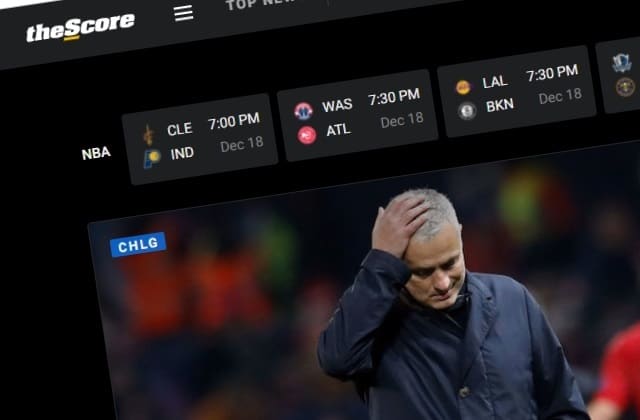 Most sports bettors are highly familiar with the mobile app “theScore” as one of the most popular smartphone apps for anyone who wants to know it they are winning or losing their latest bet.

Today, the Canadian-based company revealed plans to launch a mobile sportsbook in the U.S. in 2019 through an official licensing partnership with Darby Development LLC. Darby is the operator of the Monmouth Park Racetrack in New Jersey in conjunction with the New Jersey Thoroughbred Horsemen’s Association (NJTHA).

The company says the agreement with Darby and the NJTHA would allow theScore to offer online and mobile sports betting across New Jersey, subject to receiving all required regulatory approvals.

A mid-2019 launch date is anticipated, according to the company’s media release.

“This is a significant moment for theScore, becoming the first media company in North America to announce its plans to launch online and mobile sports betting in the United States,” said John Levy, Founder and CEO of theScore. “Sports betting has long been part of our company DNA in how we’ve delivered content to fans. Providing the ability to actually bet on games is the natural next phase for theScore.

Darby CEO Dennis Drazin, along with Monmouth horsemen, provided the legal impetus and funding that, after seven-years of contentious litigation with the major U.S. sports leagues, resulted in the repeal of the Professional and Amateur Sports Protection Act of 1992 (PASPA). That law banned Nevada-style sports betting everywhere else in the U.S. It was overturned by the U.S. Supreme Court in May 2018, opening the availability of regulated sports betting to any state choosing to authorize it.

Drazin said, “theScore has one of the leading sports apps in North America, a world-class reputation for mobile sports development, and a large and highly-engaged audience.”

Darby, according to theScore media release, would receive an unspecified percentage of the revenue from Score’s operation of the sportsbook, subject to certain annual minimum guaranteed amounts as well as certain upfront fees and renewal fees, if applicable. The agreement has a term of up to fifteen years, consisting of an initial term of five years, which is extendable for two successive five-year terms at the option of Score.

Score says it also has a binding multi-year deal with Bet.Works (US) LLC, to provide the sports betting platform for theScore’s online and mobile sports apps.

Bet.Works is a U.S. based iGaming and sportsbook provider. David Wang, Founder and CEO of Bet.Works said, “We are extremely excited about working with theScore. They have a huge audience and one of the most comprehensive sports apps on the market, providing the connective tissue between hardcore sports fans and the teams they love. We are confident the Bet.Works team can help theScore to the forefront of mobile sports betting in New Jersey and beyond.”

William Hill U.S. opened New Jersey’s initial sportsbook at Monmouth Park (the Borgata in Atlantic City also opened simultaneously) on June 14th and has had a long-term relationship with Monmouth Park operators including building an on-track sports book in anticipation of the PAPSA repeal and for several years sponsoring the track’s signature race, The Haskell Invitational.

Sports Handle has reached out to William Hill for comment on the Score/Darby deal and is awaiting a statement from a company spokesperson. This story will be updated at that time.