Get A Grip: UFC Pulls It Off In Florida, Drive-Thru Sportsbooks And Colorado 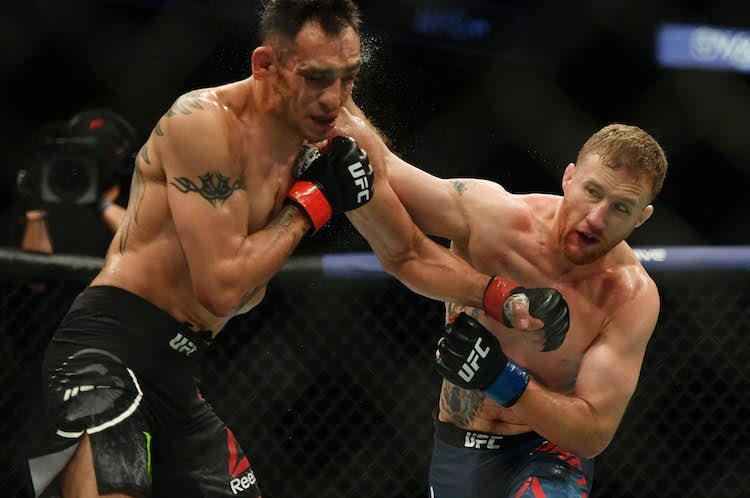 It’s information overload everywhere, and there’s not time enough to sleep and eat and stay fully apprised of what’s happening on this crazy blue dot of ours (two out of three ain’t bad). Here’s the weekend (or  occasionally fashionably late) Sports Handle item, “Get a Grip,” recapping the week’s top sports betting stories, highlighting some fresh news and rounding up key stories.

sorry but joke's on you guys pic.twitter.com/qS6pU7qtYf

I’ll have a shake with that, please

A new kind of sports betting teller window opened last week in Las Vegas, as sportsbooks at the South Point, about five miles south of the Strip, and Circa both introduced drive-thru account registration and deposits. In Nevada, in-person registration is required for mobile sports betting, and during the COVID-19 crisis, consumers have been unable to register new accounts or deposit money.

According to the Las Vegas Journal-Review, there were as many as 50 cars in line at the South Point last Wednesday. William Hill was also planning to add drive-through sports betting services at three locations in Las Vegas over the weekend.

This could be another busy week of sports betting launches in Colorado — BetMonarch delayed its rollout from Friday to today, and it’s possible that Smarkets will also join the fray. Both are licensed and approved to start sports betting in Colorado.

Centennial Bets reported that BetMonarch delayed its launch due to some technical difficulties. When the site does go live, it will likely be the fifth in Colorado, behind BetMGM, BetRivers, DraftKings and FanDuel to do so. Those four launched on May 1.

As more and more sites come online, the Colorado Limited Gaming Commission continues to tweak its sports betting regulations and offerings. The LGCC released a new definition of prop bets this week, and also removed a college soccer wager from its menu.

S P O R T S ! So this is what things are going to look like for the foreseeable future and I'm ok with that. I missed the pop from the crowd after a big shot and it was weird being 1 of 4 credentialed photographers for such a large sporting event but it was great getting to see the athletes do their thing again and I was thrilled to get the call to document the night for @ESPN & @ESPNMMA⁠⠀ .⁠⠀ .⁠⠀ #MMA #UFC #UFC249 #SportsPhotography #Sony #SonyAlpha #BeAlpha #ESPN #ESPNMMA @UFC @Sony @SonyAlpha

“Gate was zero. Attendance was zero,” UFC president Dana White said at the post-fight news conference after UFC 249 wrapped in Jacksonville, Fla. on Saturday before an audience of zero fans. “That’s a first.”

While we don’t have a reliable number yet for PPV buys (through ESPN+), White told Yahoo! Sports that the preeminent mixed martial-arts promotion saw “unbelievable pacing for buys” in the days leading up. Higher than anything he’s seen in the last few years outside of events headlined by marquee fighter, master trash-talker and drama-maker, Conor McGregor.

How much of this interest was driven by a hunger for combat amid a near-total lack of live sports, or boredom, and/or sports betting? Probably a near-equal combination of both. “The wports betting world will be watching as UFC 249 sets a potential blueprint,” reads the headline in an advance story by my colleague Eric Raskin on US Bets.

“We can share what we learned here, doing three events, with other sports leagues, who are reaching out to us and asking,” White said.

Each professional sports league will faces its own unique set of (many) logistical challenges, chief among them athlete and public health considerations, sports prepares to return. It’s easier (but not easy) for the UFC to accomplish in a one-off event, with 24 total fighters, plus trainers and coaches of course, than it will be for Major League Baseball with 50 combined players suited up per game as a head-count starting point, plus games nearly every day.

But the UFC’s apparently successful event (we’ll see if anyone tests positive post-event and traces back to the the venue) and certainly profitable foray into COVID-19 era of professional sports will certainly inspire confidence among the numerous leagues, which are sidelined until further notice.

Next up … more UFC. The promotion has two more events coming this week in Jacksonville, on Wednesday and Saturday.  And then NASCAR starts a series of races with no fans on May 17 at Darlington, followed by Tiger Woods vs. Phil Mickelson II in a “The Match: Champions for Charity” event on May 24. The event will include Tom Brady and Peyton Manning in Hobe Sound, Florida.  With Phil in attendance, wagering on the course will be as active as it is off the course.

The most important, interesting and amusing stories of the past week

ROAD AHEAD: Penn National says it has adequate liquidity, is focusing on reopening casinos and Barstool deal [CDC Gaming]

NOT THIS YEAR: Tourism spending hit record $46.4 billion in New Jersey in 2019 [Newsday]