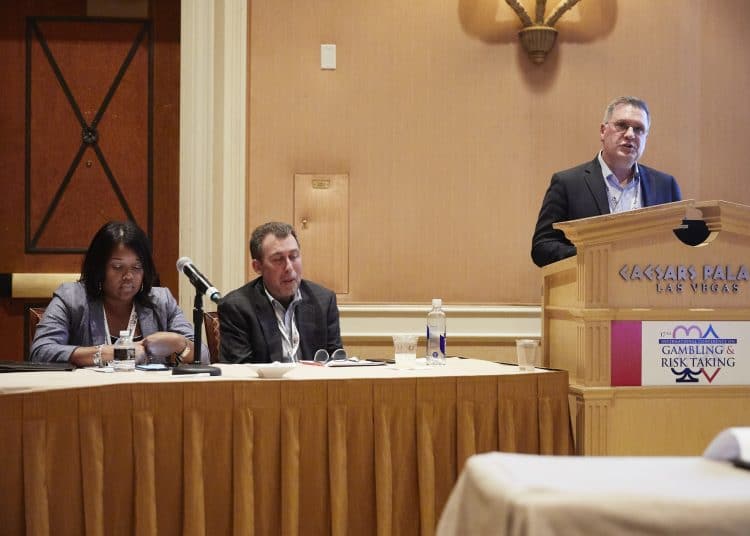 Less than 15 months since the Supreme Court struck down a federal ban on sports betting, the NCAA still appears to be grappling with how the expansion of the legalized sports gambling might harm the integrity of college athletics, and how it might impact collegiate athletes.

Last month, the NCAA abandoned a longstanding policy that prohibited states with legalized sports gambling from hosting NCAA regional and championship events. The policy change paves the way for Las Vegas to potentially host the Final Four as early as 2027.

While a session featuring Jeopardy! wunderkind James Holzhauer arguably generated the most buzz at the international conference, the growth of legal sports betting represented one of the main areas of focus at the four-day event. Holzhauer, whose 32-game Jeopardy winning streak ended on a show that aired Monday, admitted to skipping classes at the University of Illinois at times to bet on sports.

Prior to the start of the NCAA Division I Men’s Baseball tournament, several outlets reported that UC Santa Barbara entered into discussions to host a regional at The Las Vegas Ballpark, home of the Triple-A Las Vegas Aviators. Had UC Santa Barbara served as a regional host, it would have been the first NCAA championship event to be held in Las Vegas in decades. In May, the NCAA changed a policy that restricted states with legalized sports betting from hosting NCAA championship events.

Instead, the NCAA tournament committee shipped UC Santa Barbara to Palo Alto as the region’s No. 2 seed behind Stanford.

Other championship events could be held at a state with legalized sports betting as early as next season. Within a 10-month span beginning in March 2021, Lucas Oil Stadium in Indianapolis will host the Men’s Final Four, before serving as the venue for the College Football Playoff national title game the following January. Indiana Governor Eric Holcomb signed a bill that legalized mobile sports gambling in early-May.

The NCAA moved its headquarters to Indianapolis in 1999.

One policy that the NCAA could take under consideration in the coming months is whether to restrict operations of sports betting kiosks inside facilities that offer live NCAA championship events. Two gaming operators, Caesars Entertainment and William Hill US, already maintain betting lounges inside the Prudential Center, the home of Seton Hall men’s basketball team. Neither lounge has restrictions on mobile wagering. A provision in New Jersey’s sports wagering regulations prohibits betting on colleges and university located within state lines.

Before a decision is reached on whether kiosks can remain open at those events, the issue needs to be studied at greater length, Stevenson Starks indicated. Some state laws would also need to be restructured in order for there to be active wagering at those type of parlors, she added.

“That gives us a little bit of comfort that it won’t be immediate,” Starks said.

The NCAA also expressed some trepidation at statistics on heightened levels of gambling among student-athletes that participate in golf.

Men’s golfers are more likely to engage in poker playing on the course, on-the-course-wagering, and wagering on other sports than the typical athlete at their respective venues, said Tom Paskus, principal research scientist for the NCAA. The trends also apply to casino wagering across the board, according to Paskus.

A high percentage of golfers are betting on other campus sports, primarily football and basketball while some are engaging in bookmaking activities, Paskus noted. The NCAA has not seen similar rates of gambling behavior in other sports with similar levels of socioeconomic status – namely lacrosse and tennis, he added.

“It’s an area that hasn’t gone unnoticed in the data over the last few years,” Paskus said.

A 2016 study conducted by the NCAA on the percentage of male athletes wagering on sports on a monthly basis showed that 18.2 percent of golfers placed at least one sports bet a month. Men’s golf ranked the highest among 11 sports surveyed. During the same study, 5.8 percent of tennis players reported that they wagered on sports on a monthly basis.

Paskus has not seen any anecdotal evidence that suggests that Men’s Division I golfers are placing wagers of at least $1,000 per hole in NCAA sanctioned events.

“We don’t think most of them have the means to be golfing at that level,” he said.

Less than an hour after the conference ended, at least two members of a Rugby program from a major Northeast university were observed placing bets on Game 1 of the NBA Finals inside the Caesars’ sportsbook. Both players wore program t-shirts with the team’s logo prominently displayed. The players were among a larger group of students, several of whom made wagers shortly before tip-off. For the fall 2018 semester, total enrollment at the institution exceeded 25,000.

Conference participants also heard from some key figures responsible for helping the Oakland Raiders transition to their new home in Las Vegas by 2020.

As construction progresses steadily on a $1.88 billion stadium just off the Las Vegas Strip, casinos are scurrying to forge business relationships with the Raiders. Caesars Entertainment inked a 15-year deal last November to become the first founding partner of the Las Vegas Stadium. The deal is nonexclusive, opening the possibility for the Raiders to align with multiple casinos for sports betting purposes.

Bo Bernhard, executive director of the International Gaming Institute, noted that professional sports stadiums are headed in a direction where multiple gaming operators could sign deals with the owners of the clubs for mobile in-play activations inside the venue. Stadium Wi-Fi technology allows a sportsbook operator to accelerate the responsiveness of its mobile app to provide faster connectivity than its competitors.

As a result, partnerships between mobile sports betting providers and professional stadiums could increase dramatically over the next few years. Both sides are hungry for ways to engage fans as smartphone activity dominates the in-stadium experience.

“We are not going to defeat the beast that is the mega content in your pocket, but maybe the on ramp for these folks is to create enough enticing on-screen content that it becomes part of the sports watching experience,” Bernhard said.

Kevin Bagger, executive director of the Las Vegas Convention and Visitors Authority’s Research Center, said the agency has not done any research on whether increased casino foot traffic from fans en route to Raiders’ home games could affect the handle at top sportsbooks on the Strip.

The NFL plans to hold some events of the 2020 NFL Draft at Caesars’ properties in Las Vegas, including possibly the new 550,000 square foot Caesars Forum. The league awarded next year’s draft to the city in December.

The $1.8B Las Vegas stadium, future home to the @Raiders next year, has increased by $40M.

As of late-May, nearly half the construction for the Raiders’ stadium had been completed, according to multiple reports. The stadium is slated to open in time for the start of the 2020 NFL season.