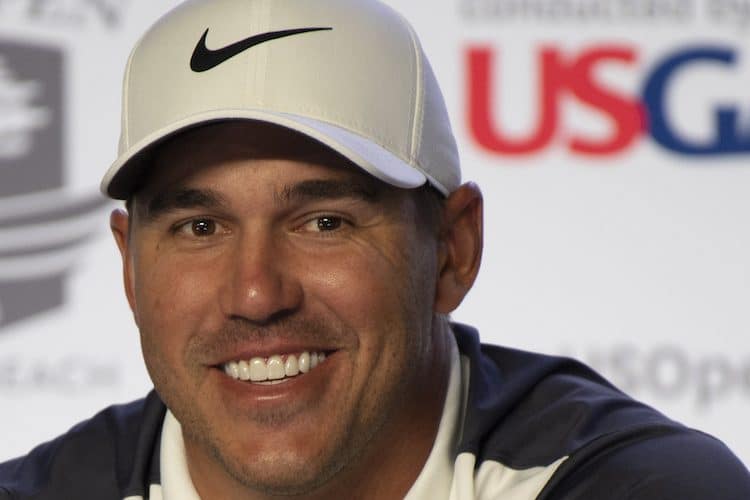 With a victory at this week’s U.S. Open, Brooks Koepka can make history on a number of fronts.

If Koepka prevails at Pebble Beach Golf Links, he will join Scottish immigrant Willie Anderson as the only male golfers to capture the U.S. national championship in three consecutive years (1903 – 1905). A victory on the scenic course will give Koepka five majors before the age of 30, moving him to fourth all-time in the category behind Tiger Woods (10 majors), Bobby Jones and Jack Nicklaus (tied for second with seven). Koepka would also continue a torrid streak with his fourth win in six majors, a feat that hasn’t been accomplished by any golfer besides Woods in decades.

Yet Koepka enters this season’s third major as the second-choice at Westgate Las Vegas SuperBook, behind one-time major winner Dustin Johnson (7/1 favorite). Rory McIlroy and Woods are the co-third choice at 10/1. Elsewhere at FanDuel Sportsbook, as of Wednesday morning, Koepka is the co-favorite at 9/1 alongside Johnson and Rory McIlroy at the same number.

Following a second-place finish to Woods at The Masters, Koepka won The PGA Championship by two shots over Johnson.

Jeff Sherman, vice president of risk management and golf oddsmaker at the Superbook, said Koepka has not received much support from customers after opening at odds of 5/1.

“His odds have been creeping up slowly to the current 8/1 that they are,” Sherman told Sports Handle on June 11.

Wynn Las Vegas has installed Koepka as the 9/2 favorite, just ahead of Johnson at 6/1. Woods is the clear third choice at the Wynn at 8/1, while McIlroy is listed at 12/1.

The USGA is reputed for creating a difficult setup at the U.S. Open replete with treacherous rough on either side of the fairway. For this year’s renewal, the thick rough again figures to play a large determinant on scoring.

Patrick Cantlay made waves on social media last week when he posted a video of a practice round on the famed course on the Monterey Peninsula. While standing on the Par-4, 526 yard Ninth, Cantlay took several steps from the hole’s right green pin location to give viewers a glimpse of the heavy rough.

“We take one, two, seven, eight paces and we’re in grass where you can’t even find your golf ball,” Cantlay said in a video circulated on Instagram.

Pebble beach going to show its teeth next week💨

Cantlay enters the tournament on a tear with four Top 10 finishes in his last five events. Ranked eighth in the world, Cantlay captured The Memorial Tournament presented by Nationwide in early-June and finished tied for third at the PGA Championship and RBC Heritage.

One wager gives Superbook bettors the opportunity to select the winner of a group of four golfers. Cantlay is favored in Group B at Plus-200, ahead of Jordan Spieth and Justin Rose (both at Plus-275), as well as Jason Day (Plus-300). Cantlay has odds of 16/1 to win the tournament.

“For realistic power ratings, Cantlay is really the fourth guy in the tournament even if some of the outright odds don’t reflect that,” Sherman said.

Due to the thick rough, the USGA places a premium on accuracy off the tee and precise iron play into the green. Woods leads the PGA Tour in greens in regulation at 72.9 percent, while Jim Furyk is first in driving accuracy with a percentage above 74.5.

As you weigh several underdogs in the U.S. Open futures, consider some of the scoring at Pebble over the last decade. Three players with odds at 50/1 or higher — Gary Woodland (80/1), Daniel Berger (150/1) and Brandt Snedeker — have played well at the AT&T Pebble Beach National Pro-Am in recent years. Over a nine-year stretch through 2019, Woodland has the best average on the course at 68.00, while Berger ranks second at 68.50, according to statistics compiled by Steve Bamford, PGA Tour editor for Golf Betting System.

Bettors should also keep in mind wind conditions and weather patterns when factoring in their bets. The weather is typically less harsh in the area in mid-June versus early February when Pebble Beach hosts the Pro-Am. Despite a 10 percent chance of precipitation at Pebble Beach in Sunday’s final round, the high for the afternoon is expected to reach 63 degrees.

Snedeker opened at 100/1 in the U.S. Open futures before finishing tied for 4th at last week’s RBC Canadian Open. The former Vanderbilt golfer also tied for eighth in the 2010 U.S. Open at Pebble Beach and captured the Pro-Am in 2013. Last week at the RBC Canadian, Snedeker shot a 10-under 60 in the second round.

“He’s down to 50/1, some of that movement was based on what he did this past week in Canada but some of it is also taking into account his Pebble Beach history,” Sherman said.

Five-time major winner Phil Mickelson will look to close out the career grand slam with an elusive U.S. Open title. Mickelson is listed at odds of 30/1.

Mickelson has finished either second or tied for second six times at the U.S. Open. In February, Mickelson fired a bogey-free 65 to win the Pro-Am by three shots over Paul Casey. It was Mickelson’s fifth title at Pebble Beach and his 44th on the PGA Tour.

Mickelson, who can celebrate his 49th birthday on Sunday with a victory, is the Superbook’s largest liability heading into the tournament.

“If you didn’t factor in the Pebble Beach history, he could easily be 50 to 60/1,” Sherman added.

Xander Schauffele, who grew up putting on the Poa Annua greens that golfers will confront at Pebble, is currently at 25/1. Schauffele is fourth in the 2019 FedEx Cup standings behind Matt Kuchar. With eight Top 10 finishes on the season, Kuchar (50/1) could take some late money at the reasonable price.

Other props to consider

Sherman is interested in tracking the response to one proposition bet, in particular. The prop pits Johnson, Koepka, McIlroy and Woods against the rest of the field. Bettors have the option of selecting any of the four to win at Plus-150 or a group of the remaining 152 golfers at Minus-180.

Since winning The Masters in April, Woods missed the cut at the PGA Championship and tied for ninth at The Memorial. When Woods won the U.S. Open in 2000, he defeated the field by a record 15 shots.

#USOpen Moments at Pebble: Tiger Woods throttled the competition at the 2000 US Open, winning by 15 strokes!💥#NameABet (Via @Covers)
Will the margin of victory this year be…