Injury reporting for the upstart league has been spotty at best, making betting on the action highly frustrating 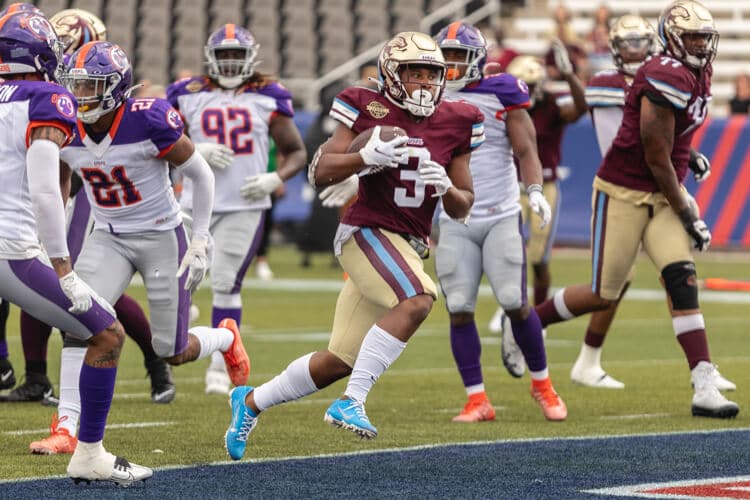 Reggie Corbin is clearly not human.

Who is Reggie Corbin? He’s a running back for the Michigan Panthers in the USFL, and he had himself quite a game this past Sunday, toting the rock 20 times for 133 yards and a score in the Panthers’ 24-0 drubbing of the Pittsburgh Maulers.

Only problem? Corbin was listed as inactive. Right up to, and through, kickoff.

As one might imagine, this caused some consternation among the gambling community, specifically in the DFS world. And it wasn’t just Corbin’s status that cratered many a lineup; all throughout the league, starters weren’t announced and healthy scratches occurred without notice.

If you successfully navigated:

You deserve whatever money you win

In short: If the USFL doesn’t get its act together with injury reporting, starting lineups, inactive lists, and the like, sports bettors and DFS players are going to rightly shy away from the product, and anyone who thinks the “product” is going to succeed without the multi-tiered supports of America’s gamblers is in for a rude awakening.

“For a startup sports league, it’s just a massive miss for them to not cater to the gambling fan base with transparent, consistent news from the start,” said Alex Hardin, who heads up the USFL content for RotoGrinders, a sister site of Sports Handle. “What is even more concerning is that it’s getting worse each week, less reliable in terms of accuracy — see Corbin, Reggie — and just in terms of general availability, such as no practice information or injury reporting was provided on Friday like weeks before, it all came on Saturday morning. It’s not difficult and it really displays a lack of understanding from their perspective on how they can make this season a relative success.”

Justin Freeman, the founder and grand poobah over at Run the Sims, has been all over USFL content in the first three weeks, and he’s seen enough of the shenanigans.

“I get it,” Freeman noted. “Starting a new league has to be incredibly difficult. It would be foolish to expect everything to be perfect from the beginning. But the league has shown a real unwillingness to engage with fans/degenerates beyond their traditional tweet-by-volume approach of generic ‘Stallions in the house!’ messages. And unfortunately it’s leading to a really frustrated group of sickos like myself.”

Dear @USFL – some folks actually did try to enjoy the league and you’ve done nothing to provide them with information. If you won’t cater to folks who actually want the league to succeed, how will you grow your audience?

“They need to build a loyal fan base fast or there will not be a USFL 2023 season,” he said. “And that’s most easily achieved through the gambling community, which they have begun to alienate.”

What’s especially silly about all this is the whole league is owned by FOX, which of course runs its own sportsbook.

“It may seem odd to assume that a league whose ownership shares an interest in a sports betting operator — FOX Bet — would need any help in figuring out how to cater to sports bettors,” Freeman noted. “But their actions show that they actually think they are running a must-watch football league that stands on its own two feet. And it just isn’t.”

“We strive to provide a timely and comprehensive gameday player status report for fans,” a USFL statement sent to Sports Handle read. “Last Sunday, there was an error on our part as it relates to a player’s active status that was not updated on the team Twitter account in a timely manner. We regret the mistake and have added additional safeguards, so this won’t happen again.”

.@ReggieCorbin walks right into the end zone for the touchdown‼️🐾

What does need to happen, however, is more than that. There needs to be immediate action taken by the league so it doesn’t go the way of the AAF. Remember the AAF? One season, back in 2019?

From a RotoGrinders article at the time: “Where the AAF really dropped the ball is making a connection with sports bettors and fantasy players. When the league launched, it stated repeatedly that it wanted to appeal to bettors. It’s failed miserably in that area, as bettors have lost interest in the league. … Where the AAF really failed though is making injury and stats easily available to fans. Being a new league, you would think the AAF would bend over backwards to get information out to the public, especially if its goal was to reach gamblers and DFS players. Instead, it’s easier to get a realistic injury update from Bill Belichick than it is to find out who is starting at quarterback for Salt Lake.”

Through three weeks, the USFL is trending toward the AAF when it comes to getting out injury and player updates.

It needs to change immediately.

Leave it to Adam Levitan of Establish the Run to crystalize it in a tweet, calling for — and rightly so — a director of information.

If I was in charge of the USFL, I'd hire a "Director of Information."

* Ensure all injury reports are submitted and correct every week.
* Force coaches to reveal starting lineup 30 minutes before kick each game.
* Develop an API with basic and advanced stats. Plus injury info.

“The games have been fine,” said Levitan. “But I wish they would innovate some more with everything — the rules, the broadcast, and the communication with people gambling.”

On the bright side

To be clear: It’s not all doom and gloom here when it comes to the USFL. I’ve certainly enjoyed it, and I’m not alone: Week 3 ratings were up over Week 2, and plenty of sports bettors have waded into the murky waters.

“The USFL interest we have seen this year is right around what we expected,” said Mike Korn, an analyst for PointsBet. “That being said, week-over-week handle and bet count has been growing since Week 1. USFL obviously isn’t one of the biggest drivers of handle, but it has room to grow the rest of this season and seasons to come.”

Dom DeBonis, a junior trader at WynnBET, echoes the sentiment, and more.

“The USFL has been a pleasant surprise both in terms of the enthusiasm for the product and players looking to wager on it,” he said. “We hope players will continue to enjoy our USFL offerings and that spring football is able to establish a home on the sporting calendar.”

The focus by @YoungKing_JD5 to make this catch 💯

The @USFLBreakers take the lead in the 3rd quarter 🌊🌊 pic.twitter.com/Pa3tazXEIW

It’s never a good idea to speak in absolutes, but in my conversations with sports bettors and DFS players, everyone wants to see the USFL succeed. Ian Hartitz of Pro Football Focus probably summed it up best earlier this week when he quipped, “Football in the spring is objectively better than no football in the spring.”

But football in the spring when you can’t be confident in who’s starting, who’s injured, who’s playing, and who’s magically active is objectively … well, it’s less than better.

Here’s hoping the USFL quickly gets its act together on this. We’ll see how the practice reports and injury reporting news comes out this week. Hopefully the league responds to the requests for clarity.

Sports bettors and DFS players are the USFL’s best friend right now. The USFL has to make sure it becomes a two-way relationship.