Several prominent books may be able to use the feeds this week after temporary, one-week outage 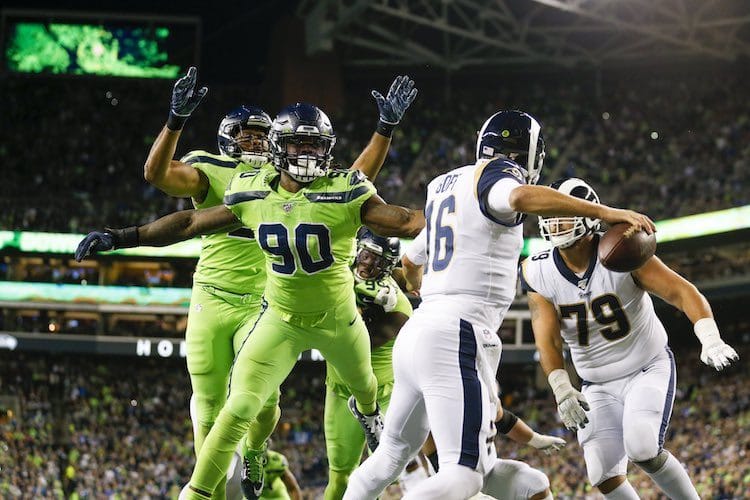 A bevy of Las Vegas area sportsbooks are expected to regain their signal to the NFL’s in-game data feed this week, as early as Thursday night’s matchup between the New York Giants and New England Patriots, a source close to the situation told Sports Handle.

The vast majority of the books, which receive the signal through Stadium Technology Group, a third-party Nevada software provider, lost the feed before last Thursday’s game between the Rams and Seahawks, the source said. While a few area sportsbook operators booked in-game action for NFL games manually on Sunday without the feed provided by Sportradar, several others did not accept any in-game bets for Sunday’s slate.

News of Sportradar’s decision to pull the feed was first reported by ESPN’s David Purdum.

This week, Sportradar cut off access to the NFL data feed for multiple Las Vegas sportsbooks. Books had been using the data feed to book in-game wagering.
Some shops chose not to offer in-game wagering on NFL this weekend. Other shops booked in-game on select games manually.

The Nevada books were given a Sept. 30 deadline to pay an additional fee for continued access to the NFL’s official data feed, ESPN reported. Although Sportradar threatened to turn off the signal for MLB and NBA in-game feeds on previous occasions this year, last week’s move marks the first time the Switzerland-based company followed through with such threats.

In August, Sportradar agreed to an extended partnership with the NFL under which the company gained exclusive rights to distribute the league’s official betting data to sportsbooks in the U.S. and certain countries around the world. In Nevada, where legalized sports betting has existed for decades, many sportsbooks had longstanding contracts with Sportradar that predates the company’s partnership with the NFL. For a flat fee of $5,000, the Nevada books with existing contracts with Sportradar will still receive the NFL’s feed for the remainder of the season, sources say.

Sportradar US did not immediately respond to a request for comment.

The episode represents the latest chapter in a contentious battle between U.S. professional sports leagues and legal sportsbook operators on the commercial value and intellectual property rights regarding the use of sports betting data.

Another chapter unfolded last week when William Hill US became the fourth authorized sports betting operator of the NBA. Though William Hill US CEO Joe Asher previously expressed resistance to compensating leagues for their official data, he later clarified the remarks — claiming that he would pay an additional fee in situations that would help improve his company’s products.

While numerous Vegas books had their signal cut last week, several companies still had every intention of paying the upgraded fee, according to a source. As the deadline approached, a few sportsbook operators still needed to review addendums related to the proposed fee changes and return the completed documents to Sportradar.

“No one practiced common sense, I think that’s why some of the books didn’t have it,” a source said.

Despite the apparent truce, there still could be one or two holdouts this week, a source said. One sportsbook executive expressed trepidation to paying an over-the-top fee for NFL official data due to the slippery slope that could ensue. Unlike Major League Baseball, which has multiple providers of real-time league data, the NFL currently has just one in Sportradar.

“If you have one provider, they have an opportunity to increase prices over time as they see fit,” the executive said. “That’s the main issue to all of this.”

The @MLB "grace period" to get in line and pay the league directly for its "official data" has passed.

Outside of Nevada, Sportradar appears to have set rates that include a percentage of revenue, for sportsbook operators that have established a presence in states new to legalized sports gambling. For Sportradar’s NFL package, the company is charging an additional 1.5% to 2% of a subscribing sportsbook’s in-play Gross Gaming Revenues (GGR) on NFL wagers, another source told Sports Handle, a figure also reported by SportBusiness.

Gross Gaming Revenues are defined as the difference between the amount a bettor wagers with a sportsbook and the amount the book pays out in winnings.

If the minor issues are wrinkled out, there is a strong possibility that the aforementioned Vegas books will receive Sportradar’s NFL feed for the remainder of the season. Still, it appears that some of the companies have expiring contracts with Sportradar that are set to elapse at some point next year. By the start of the 2020 NFL season, the parameters could change drastically.

For now, it is unclear if a legal U.S. sportsbook will need to become a direct licensee of the NFL, an “authorized” gaming operator of some kind, to receive access to the league’s official data feed on a long-term basis.

An NFL spokesman did not immediately respond to a request for comment.

Next week, a number of prominent industry leaders will convene in Las Vegas for the Global Gaming Expo 2019 (G2E). At last year’s conference, two panelists exchanged fireworks during a session on sports betting data.

Buckle your seatbelts, the ongoing sports data kerfuffle is far from settled.