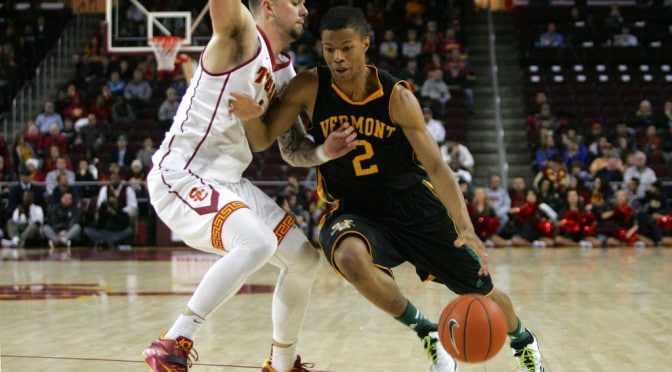 Just about every year in the NCAA Tournament, at least one No. 12 seed knocks off a No. 5. We obviously don’t know yet which four schools will be a 12 in this year’s tournament, but Vermont has been projected as one by the various experts should the Catamounts win the America East Tournament championship game on Saturday.

If you are a devout NCAA basketball fan/bettor, then you know that during Championship Week, the first game on the Saturday schedule annually is the America East final with an 11 a.m. tipoff on some ESPN network. This Saturday it’s Maryland-Baltimore County at Vermont on ESPN2, with the Catamounts expected to be double-digit favorites. And I’m here to tell you to fear Vermont if it’s a No. 12 in the Big Dance and the team you root for/bet on is a No. 5 in that matchup.

Fear the Vermont Catamounts As Potential Giant Killer, 12-seed In NCAA Tournament; Plus a Look at the Ivy League Tourney

In the America East, the Catamounts went 15-1. More and more schools, especially smaller ones, are looking to Canada for talent, and Vermont’s best player is Toronto native and senior guard Trae Bell-Haynes, who won his second straight America East Conference Player of the Year Award. He would likely start on most power conference teams.

Vermont is in the conference title game for the third year in a row. In 2017, it beat Albany in the final and then gave No. 4 Purdue all it could handle in the NCAA Tournament before falling 80-70. That game might have been different had Vermont not lost senior Kurt Steidl to a knee injury in the first half. Bell-Haynes finished with 15 points, seven boards and six assists in the loss.

On Saturday, UMBC visits Patrick Gymnasium in Burlington. The Retrievers finished second in the regular-season standings at 12-4. They were swept by Vermont, losing 71-56 on the road Jan. 6 and 81-53 at home on Feb. 3. So, it would be a sizable upset were UMBC to earn its second-ever NCAA Tournament berth. It likely would be a No. 15 seed.

Also Saturday are the Ivy League semifinals at the famed Palestra in Philadelphia – it’s only the second year the Ivy has a postseason tournament. Harvard and Penn tied for the regular-season title with 12-2 records, but the Crimson won the tiebreaker and are the top seed. They host Cornell in Saturday’s opener. Lines on that are TBA, with Harvard likely around -6. It is +175 to win the tournament and was the preseason Ivy League favorite.

Penn is the -120 favorite and plays Yale in the second game Saturday, essentially a home matchup for the Quakers, who are projected to be 4-point favorites. Yale reached last year’s tournament final, losing to Princeton. The Bulldogs and Quakers split in the regular season, each winning at home. Yale’s was on a basket with 0.3 seconds remaining to prevail by a point.

The Ivy League champion likely will be a No. 15 seed in the NCAA Tournament, thus avoiding the First Four – which features two 11s, two 12s and four 16s.