Get A Grip: Virginia On Track, Around The Horn In U.S., Notable Sports Betting Industry Stories 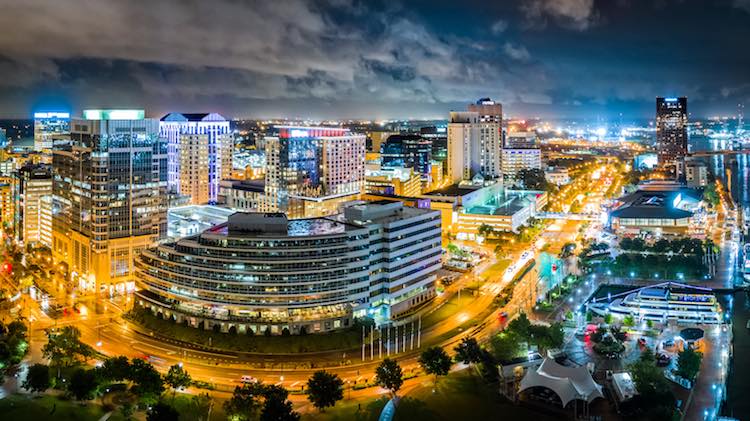 Aerial panorama of Norfolk Virginia by night. Norfolk is the second-most populous city in Virginia after neighboring Virginia Beach and the host of the largest navy base in the world. (Shutterstock)

Here’s the weekend Sports Handle item, “Get a Grip,” recapping the week’s top stories, highlighting some fresh news and rounding up key stories in the world (and industry) of legal U.S. sports betting. You may have missed them, and they are worth reading.

There’s been plenty of action on sports betting in Virginia this week, but all of it was leading to a clear goal — to get Senate and House bill sponsors together to hammer out the details of what a legal framework will look like so that bettors will be one step closer to betting on sports in VA. That happened Wednesday, when Delegates Mark Sickles, Marcus Simon and Will Morefield and Senators Jeremy McPike, Monty Mason and Todd Pillion were designated to conference on the bills. The bipartisan group will be tasked with coming to a consensus on sports betting and getting it to floor votes by March 8, when the general assembly adjourns.

There’s actually not too much the sides need to work out. Both the House and Senate bills allow for state-wide mobile sports betting. The biggest issue will likely be whether or not a new law would allow for betting on college sports, or to what extent. SB 384 allows for betting on college sports while HB 896 does not. The House bill has the so-called “college carveout.”
Among the other issues:

Around the horn: Statehouse edition

Colorado: As systems prepare for go, we look at which operators are likely to punch their tickets next.

Connecticut: Lawmakers in this state looked to be first movers after the May 2018 fall of PASPA, but nearly two years later, there’s been no consensus among lawmakers or with the state’s two powerful tribes involved in gambling operations. They’ll try again on Tuesday, when the Public Safety and Security Committee meets to discuss HB 5168 and SB 21, both which would allow for state-wide mobile sports betting as well as in-person sports betting at the Mohegan Sun and Foxwoods casinos and in “entertainment zone facilities.” These zones are an attempt by lawmakers to include commercial sports betting in the mix. There are eight gaming-related bills on the agenda for the public hearing, which is set for 11 a.m. ET Tuesday.

Georgia: A second bill, SR 821, was introduced Tuesday. The three-page bill would allow for sports betting via state lottery but does not lay out any sort of regulatory framework. An earlier bill, SB 403, also would allow for sports betting via the lottery, and it includes details on tax rates and the regulatory process. This bill allows for state-wide mobile. Neither has been assigned a committee hearing.

Kentucky: Representative Adam Koenig’s HB 137 has been on the House floor for a month, but no vote has been taken. An 18th amendment, this one dealing with online poker and online poker revenue, was filed Monday. Koenig previously said he’s got enough votes to pass the bill out of the House but needs more Republican votes before sending it to the Senate. The Kentucky general assembly closes on April 15.

Louisiana: They’re preparing to give it another go this year as some lawmakers are tired of seeing residents flock to Mississippi (and online, offshore) to put down legal wagers.

Massachusetts: Lawmakers had asked for an extension on a legislative deadline to continue considering sports betting, but that extension expires today (Feb. 28), and there has been no movement on the dozen sports betting and gambling-related bills in the general court. Update: Here’s another bill as they move very deliberately (read: slowly).

Nevada: The Nevada Gaming Control Board for the first time released a (revealing) official breakdown between retail and online/mobile sportsbooks in the state.

South Dakota: SJR 501, which would allow for sports betting in Deadwood only, was referred to the House State Affairs Committee. The bill, which would send the decision to voters in November, was approved by the Senate, 24-10, on Feb. 11.

Washington: Bill that would deliver land-based wagering only moving along. An update to come later on Friday after another hearing.

Other important, interesting stories of the week

– Reports that its online sports betting market share is 44% in states where live (NJ, IN, WV, PA)

– Across the year, over 80% of FD sportsbok $3 billion handle generated from online channels

YOU GET A LAWSUIT: FanDuel Founders, former employees allege board undervalued legalized sports wagering ahead of deal with Paddy Power Betfair [WSJ]

TUG-OF-WAR: “There have been concerns brought to our attention,” House Speaker says about TN sports betting draft regulations in progress [Times Free Press]

SURVEY SAYS: Indiana sports bettors dished all about their betting apps and other preferences [RotoGrinders]

ON ANOTHER CAMPUS: At Michigan State, a student look at the “college craze” [State News]

LET’S DO IT LIVE: BetMGM Sportsbook joins the party in Indiana, bringing online books up to six [HSB]

POLLING: Check out our new politics and presidential odds page at US Bets
CLOSING TIME: Eldorado-Caesars merger gets approval in Maryland [CDC Gaming]

🙄 Leave it to Darren to muck things up. You can’t be profitable if you lose money. Bettors in aggregate lost 2.6% of what they wagered. NOT profitable. https://t.co/FtOyGMw0w8

A primary reason NFL players are expected to ratify the proposed CBA: Nearly 60% of league makes minimum base salaries, which would spike immediately by over 20% and eclipse $1 million for all players by 2029. From term sheet NFLPA sent to agents (in 1000s, by credited seasons): pic.twitter.com/kRbLlzqGjO

A historic prop from @WilliamHillUS in Nevada:

Which team will Tom Brady take his first snap with in Week 1 of the 2020-21 NFL regular season?