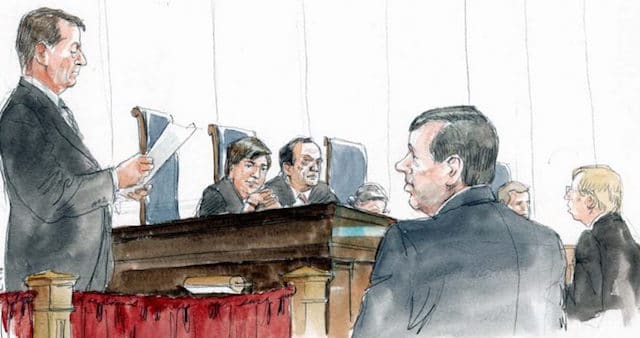 A sketch showing the bench during Christie v NCAA

Editor’s Note: In a special contribution to SportsHandle.com, Ryan Rodenberg details his experience attending oral arguments in the Supreme Court sports betting case pitting the NCAA, NBA, NHL, NFL, and Major League Baseball against New Jersey Governor Chris Christie and other state officials.  The following first-person account is drawn from Rodenberg’s pen-and-paper notes before, during, and after the hearing.

No one set an over/under on what time I had to arrive to absolutely ensure a seat in the courtroom for the Supreme Court sports betting case.  I decided to place a max bet on the under, whatever it might have been.

After a short walk from my hotel near Union Station, I arrived at the nation’s highest court.  Two lines had already formed.  The first—featuring about 40 people in sleeping bags, space blankets, and heavy winter coats—started on 1st Street and ran south.  I was told that everyone in this line was queueing up for the high-profile case the following day about a Colorado baker who refused to make a wedding cake for a same-sex couple.  The second line, with about 30 individuals waiting for today’s sports betting case, started on the southeast corner of the and stretched along East Capitol Street into the darkness.  I was looking for a third line…the one for members of the Supreme Court Bar and the small number of seats reserved for them.  I couldn’t find it.

“Officer, could you please tell me where the lawyer line is for today’s proceeding?” I asked the Supreme Court Police officer standing at the top of the marble steps leading up the Court’s massive columns.

“You’re first,” she replied and directed me to start the line behind a pillar on the northeast corner of the grounds near the intersection of 1st Street and diagonal-cutting Maryland Avenue.  “We’ll open the doors at 7:30am.”

The view of the elevated Supreme Court entrance and its massive doors was immediately in front of me.  And the illuminated U.S. Capitol dome behind me was incredible under what appeared to be a full moon.

I start pacing back and forth to stay warm.  It was too dark to read the brief I had stuffed in my back pocket.

“You in line?” I texted a colleague who had also been following the case for years and had told me that he would arrive early for the second line around the corner.

A second person arrived in line behind me.  Finally.

We exchanged pleasantries and then asked softball questions of each other to gauge relative levels of understanding about the case.  My fellow line-waiter was well-versed.  He worked on the case directly when the lawsuit was at its earlier stages.  Our conversation grew deeper.

“What if the statute at issue was called the ‘Marijuana Protection Act’ instead of the ‘Professional and Amateur Sports Protection Act?’” he asked me.

Point well taken.  The analogy to sports betting is striking given the federalism concerns also present in the debate over state legalization of marijuana and the shadow of federal law on the issue.

A third SCOTUS Bar member arrived, also from Florida.  Then a fourth, from Chicago.

A large contingent from New Jersey then fell in line.  On the group’s right flank was State Senator Raymond Lesniak.  I recognized the name immediately.  Senator Lesniak introduced the legislation in the Garden State at issue in the Supreme Court case.  He introduced himself to the rest of us and our entire group chatted about various aspects of the case for the next hour.  It was great.

A group of Supreme Court police officers emerged from a side door and one of them walked directly to our line.

We walk across the main plaza and re-convene at a side entrance on the south side of the building.

After passing through the security screening, we lined up again in front of the statute of Chief Justice John Marshall for check-in.

Senator Lesniak stepped away from the line to film a short Facebook Live segment from inside the Supreme Court.  There were at least 75 attorneys now in the Bar member line.  No one seemed to know the exact number of seats slotted for the group, but three people thought the number was 35.

After check-in and a walk up the marble steps to the next floor, everyone dispersed to stow away their phones and other electronics in the coin-operated lockers and moved to another line for a secondary security screening immediately in front of one of the courtroom entrances.

Nearly everyone in our section — the first full row of seats behind the counsel tables and just to the left-center of Chief Justice Roberts — was now seated.  Low conversation emitted around the courtroom.  I turned in every direction to take it all in.  The nine high-backed black chairs for the justices were empty, but assistants periodically carried in large stacks of briefs for each justice to have handy during the argument.

I continued to rubberneck around, absorbing the courtroom.  Gov. Christie was to my left, standing and smiling while talking to a handful of lawyers from New Jersey.

The three attorneys to participate in oral argument were now at the two desks about ten feet in front of me.  To my left sat Gibson Dunn’s Ted Olson, the lead attorney for Gov. Christie and the other state officials in the case.  Olson was joined at the table by co-counsel Matthew McGill and Ronald Riccio.  Ten feet directly in front of me was Paul Clement of Kirkland & Ellis.  Clement was appearing for the five sports leagues who initiated the case.  Jeffrey Mishkin from Skadden Arps sat to Clement’s right.  Jeffrey Wall from the Solicitor General’s Office sat to the right of Mishkin.  Wall wore a long grey overcoat, the traditional attire of any lawyer from the Solicitor General’s Office arguing a case.  Solicitor General Noel Francisco walked to the New Jersey table and chatted with McGill.

Senator Lesniak, standing behind me to my left, flashed a thumbs up sign to someone in the crowd.

Olson, Clement, and Wall were all seated and studying their notes.

Olson scribbled a note to himself.  Clement and Wall were motionless.

The Chief Justice opened the proceedings by mentioning the issuance of the Court’s new orders and the motions for Supreme Court bar admission to be made in open court.

Olson moves for admission of New Jersey Governor Chris Christie and a handful of other New Jersey state officials.

Next is Paul Clement.  He moves for admission of a small group that includes a lawyer from Major League Baseball.

“Mr. Chief Justice and may it please the Court,” I said while in making a motion for the admission of three Florida-based lawyers I know who also made the trip to DC for the hearing.  “I am satisfied each possesses the necessary qualifications.”

Chief Justice Roberts granted my motion and I returned to my seat.

A few more motions for admission followed and then all the new members of the SCOTUS bar—including Gov. Christie and about 35 others—stood up, raised their right hand, and took the oath.

The undercard was now over.

Editor’s Note: The written transcript of the oral argument was released later in the day on Monday. The audio recording of the hearing was made public four days later.  SportsHandle.com covered the event in-depth, including predictions on vote counts from eyewitnesses in attendance.

And, with that, the hearing was over.

Olson, Clement, Wall, and co-counsel on both sides filed out of the courtroom.  Clement carried his oversized brown briefcase.  Olson followed seconds later, holding his briefcase in one hand and an accordion file folder with various papers and post-it notes sticking out of it in his other hand.

I put my pen away and shook out my hand while looking at four pages of detailed notes.

And it was worth the wait.