Why A Former NFL Kicker Called Me An Idiot, Plus Week 2 NFL Picks

Josh Allen, the Cleveland Browns, Mike Evans, and more, including the fact the kicker was right 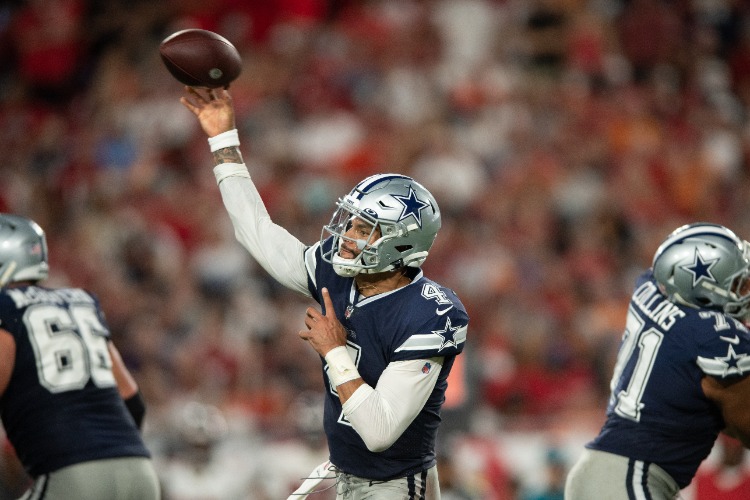 I drafted Tony Franklin in the first round of my inaugural fantasy football league draft. For those of you whose memories don’t go back to 1986, let me be clear: Tony Franklin was a kicker. A barefoot one, no less.

Why did I take a kicker with the No. 5 pick? Because I had no idea what I was doing.

Of course, today I would never take a kicker until the very last round. You live, you learn, you move on.

It’s a lesson worth remembering as we enter the second week of the NFL season, especially after a first week that was … well, “unexpected” comes to mind.

Underdogs went 11-4 against the spread on Sunday, and the Las Vegas Raiders made it a dozen on Monday night.

Underdogs were 11-4 against the spread on Sunday 🐶 pic.twitter.com/JyKsdRk0Kt

Even more unexpected? Nine of the dogs won outright, and five of them won on the road, which is the first time that’s happened in Week 1 since Ronald Reagan was president.

Despite full crowds being back around the league, eight underdogs won outright today, including five on the road, the most in the opening week of the season in over 35 years, per ESPN research producer @EpKap.

12 underdogs covered the spread, the most in Week 1 in the Super Bowl era.

Of course, if you read this space last week, this unexpectedness wouldn’t come as much of a surprise. Here’s what I had to say about that …

“And there’s nothing quite like Week 1 of the NFL season, when we’ve done all the research and we all think we know everything. That is quickly followed by realizing we know nothing, which usually occurs no later than the end of the first quarter of the East Coast games.”

I wasn’t wrong, either. By the end of the first quarter of the 1 p.m. games, it was clear the Buffalo Bills were sputtering, the Cincinnati Bengals were going to hang with the Minnesota Vikings, the Tennessee Titans were troubled, and the Jacksonville Jaguars still suck, even when playing the Houston Texans (who would destroy the University of Alabama, just stop it).

And then looking at the whole of the week — I mean, golly. The Green Bay Packers apparently forgot there was a game, the San Francisco 49ers somehow almost lost due to a furious Detroit Lions comeback, and the Atlanta Falcons were flatter than Kyrie Irving’s Earth.

I love Kyrie, but the “I like my water like Kyrie Irving likes his Earth” line in this weeks Ted Lasso proper sent me pic.twitter.com/itLiiMQapi

Bottom line? While it’s true we still don’t know anything, once again we’re going to think we do as we head into Week 2. In short: Let’s not overreact — or, for that matter, underreact — to some of the stuff that happened last week.

“Only an idiot would draft a kicker in the 1st round,” is how Tony Franklin signed his autograph to me, after he was tracked down a few years ago by one of my fantasy league mates. 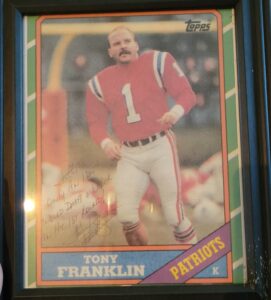 I placed this one Wednesday:

Taken together, that’s a +1084 ticket over there at DraftKings.

Rationale? The Browns are good, the Texans … well, not sure if beating the Ohio State Jaguars counts. So Cleveland should roll.

As for the Panthers? Two very good defenses in a division game, two great coaching staffs, I like the idea of this game staying close.

And the Jets? Well, why not. On paper, the Patriots really don’t seem to be that much better — if at all — than the Jets. So, you know, #analysis and all. (Last week: Nope. Had the Panthers -5.5, the WFT winning, and the Browns winning.)

FanDuel is the place for easy-to-build teasers, and how easy is this one, taking 6 points a side:

Again: The Browns are good, the Jags are bad, and Cowboys and Chargers are going to throw the ball 90 times. Teaser comes in at +140. (Last week? Uh, no. The Buffalo Bills torpedoed me, though I did have the Chiefs and 49ers covering their miniscule spreads.)

First of all, why not FanDuel? Because you can build any lineup you want over there. DraftKings — making up for last week’s silly soft pricing — is a little tougher this week. But for my plays of the week, I’m going to take a walk down narrative street with a pair of wide receivers: Mike Evans of the Tampa Bay Buccaneers and K.J. Hamler of the Denver Broncos.

For Evans ($6100), he was quiet in the week one shootout with the Cowboys, and I like the idea this week of Tom Brady — who knows a thing or two about quarterbacking — finding his theoretical No. 1 wideout to get him a score.

Hamler ($3,800) has developed a strong rapport with Teddy Bridgewater — Bridgewater even asked for Hamler’s locker to be moved next to his. Also, this: With Jerry Jeudy on the shelf, Hamler will become the Broncos’ top slot option. Also, this: Hamler dropped a 51-yard touchdown last week, and if he had caught it, he’d be 50% owned at $3,800. Add it all up, and the stars align for Hamler this week.

KJ Hamler said Teddy Bridgewater asked the equipment staff to move Hamler’s locker next to his.

Hamler said he’s never had a QB serve as a mentor like that.

Sorry for hollering, but this was apparently the first thing I got right last week, so there is some buzz here. I may be the nation’s top Survivor pool maven. So if I have to eliminate the Rams, I’ll take the layup this week with the Browns. Easy-peasy Nick Chubb squeezy.

Far as I can tell, DraftKings is owning it this week, giving 20% boosts across the board on each game. You can use it for whatever you want. Hard to pass that up.

Also notable: PointsBet has no-juice spread bets for every game and FanDuel has its no-risk single game parlay (up to $10).

Going to Caesars for this one, the Sunday night tilt between the Kansas City Chiefs and Baltimore Ravens. The visiting Chiefs are 3.5-point favorites, after opening the week as 2.5-point favorites. I hate playing the “why did the line move through three points” game, but the fact of the matter is it did move. I guess “sharps” hammered the Chiefs at -2.5, which makes a ton of sense, as the Chiefs are the Chiefs and the Ravens A) lost to the Las Vegas Raiders in a game where their defense was abused and B) have more injuries than day one at trapeze camp for nihilists.

Point being: Obviously the Chiefs are going to win this game bigly. Obviously.

Feels too easy to me. (Last week my Cincinnati Bengals gut call paid off, so again: I’m clearly the nation’s trap game expert.)

I got destroyed last week on props, taking running back receiving overs at alarming rates. This week, I’m going to reel it back in and keep it simple:

In the five full games he’s played under offensive coordinator Kellen Moore, the fewest pass attempts Prescott has attempted has been … 39. The next lowest is 47. Load ‘er up.

Obviously you’re doubling down after I gave you the over 48 in the Philadelphia Eagles-Atlanta Falcons tilt, and since you’re my VIP customer, I’m going to give you the one pick this week for which I would normally charge $500,000. For one week only, I’m going to provide it for free: The over in the Miami Dolphins-Buffalo Bills game.

Either take the over 47 at -115 at BetMGM, or over 47.5 at -110 anywhere else. This one actually came down from a 48.5 total to start the week, and if you can find it anywhere at 46.5, fire away. Again, remember: This is a guaranteed game for me, so there’s no way it can lose. I’m a football genius and I can see the future. It’s quite a combination, truly. Just ask Tony Franklin (please don’t).