Maryland is a touchdown favorite at Temple, while the nation's top teams are heavily favored on Saturday 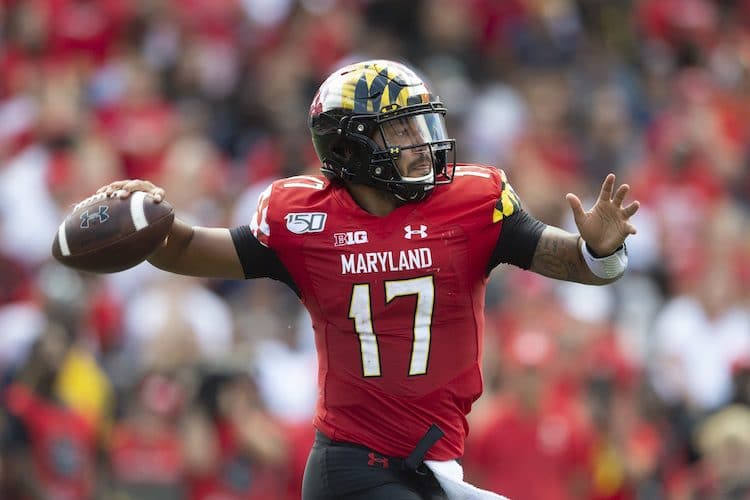 After a slew of marquee matchups last Saturday, the Week 3 college football lineup is expected to lack sizzle this weekend before several national title contenders face off at month’s end.

The slate represents one of the few weeks this season without a matchup featuring two Top 25 teams. As a result, the five highest ranked teams in the nation, Clemson, Alabama, Georgia, Oklahoma and LSU, all open as heavy favorites on Saturday.

The eyes of college football, however, turn this week to a team outside the Top 10. With 142 points in two dominating victories, Maryland has surprisingly vaulted into the national conversation. The point total is the third-most by an FBS team through the first two weeks of a season in 83 years. Adopting elements of disparate schemes by Nick Saban’s teams in recent years, former Alabama offensive assistant Mike Locksley has created a potent offense of his own in Maryland.

Armed with a variety of offensive sets – West Coast, RPO, single-back and the spread – Maryland torched Syracuse for 650 yards in a 63-20 win. Maryland, now ranked 21st in the nation, takes to the road for the first time this season in a matchup at Temple.

Urban Meyer breaking down how Maryland’s offense has become so explosive this season pic.twitter.com/j1nVd6CPwV

While Maryland opened as four-point favorites against the Owls, the public quickly bet the Terps up to eight early in the week. Since then, Maryland has held steady as a seven-point favorite at numerous sportsbooks throughout Las Vegas. On the moneyline, Maryland remains a -275 favorite in the desert and out East in New Jersey and Pennsylvania, after reaching as high as -300 at the Westgate Superbook on Sept. 10.

There has also been considerable movement on the total, thanks in part to Maryland’s prolific offense. While the total opened at 62.5 at Circa Sports in Las Vegas, it has moved several points at a number of sportsbooks around the Valley. As of 4 p.m. ET on Sept. 12, both Caesars Sportsbook and PlayMGM had the total at 66.5. Outside of Nevada, the total also stood at 66.5 at DraftKings Sportsbook.

Temple (1-0) sailed in its opener Sept. 1, a 56-12 rout over Bucknell. Owls quarterback Anthony Russo finished 32-of-41 for 409 yards and four touchdowns. Temple finished 8-5 in 2018, including a season-ending 56-27 loss to Duke in the Independence Bowl. Although the Owls lost two of their top receivers, they return Russo and four starting offensive linemen from last year’s squad.

Other matchups to watch on Saturday

The nation’s top two teams, Clemson and Alabama, are not expected to face much of a challenge when they take on Syracuse and South Carolina respectively. Clemson, the defending national champion, is a 27.5 point favorite at Syracuse while Alabama is favored by more than 25 at South Carolina. John Murray, sportsbook director at the Westgate Superbook, has seen some money come in on the Crimson Tide this week, but does not anticipate that the contest will be a large decision for the book.

The Superbook, though, faces a considerable liability if Oklahoma soundly defeats UCLA at the Rose Bowl in Pasadena. Over the summer, Oklahoma opened as a 10-point favorite over the Bruins in a futures matchup. The line now hovers around Sooners -23.5 at numerous books, providing an arbitrage opportunity for bettors who went with Oklahoma a few weeks ago.

“I don’t see much value on the Sooners now,” Murray said.

Arizona State, another prominent Pac-12 team, also enters a matchup Saturday as a double-digit underdog. Although the Sun Devils have held their two opponents to 14 points combined on offense, Herm Edwards’ team is giving 14 to Michigan State in East Lansing. With the loss of wide receiver N’Keal Harry, a first-round pick of the New England Patriots, the Sun Devils’ offense has been less than stellar through two weeks.

“Michigan St. needs to exact revenge for their loss in Tempe last year, their Big 10 schedule is brutal,” Murray said.

Through two weeks, Alabama quarterback Tua Tagovailoa remains the overwhelming favorite to win the 2019 Heisman Trophy. Tagovailoa, last year’s runner-up, is listed at +250 at William Hill US to win the award given annually to the nation’s most outstanding player.

The odds plunged again on LSU quarterback Joe Burrow following his superlative performance last week at Texas. Burrow, who opened the season at 200/1 at the Superbook, is now the co-second choice at 5/1 along with Clemson quarterback Trevor Lawrence and Oklahoma quarterback Jalen Hurts. Burrow entered last week at 25/1 before passing for 471 yards and four touchdowns in a 45-38 win over the Longhorns.

One candidate continues to receive support at sportsbooks in Iowa, despite his modest numbers. At Harrah’s Council Bluffs Hotel & Casino, 42.4% of all Heisman bets have been placed on Nebraska quarterback Adrian Martinez. The wagers represent 32.2% of the Heisman handle at the property, said Jeff Davis, director of trading at Caesars Entertainment. By comparison, just 8.8% of all Heisman tickets at Caesars properties in Nevada have been written on Martinez.

Harrah’s Council Bluffs is located near the Iowa-Nebraska border, roughly an hour from Lincoln. The sportsbook has written only two tickets thus far on Tagovailoa, Davis said.

At the Caesars sportsbook in Council Bluffs, Iowa, there are more bets on Nebraska QB Adrian Martinez to win the Heisman Trophy than there are bets on every other player combined, per Caesars head of risk Jeff Davis, aka @The_Junkyard.

The book figures to face a considerable regional bias on Nebraska football throughout the season. At Council Bluffs, more tickets have been written on Nebraska (-14) on Saturday versus Northern Illinois, than on Iowa and Iowa State combined, he added. The Hawkeyes are a 2-point favorite over the Cyclones nationwide after opening at Pick’em.

Sharp bettors have backed several teams this week, Murray said. The Superbook has seen sharp money come in on Temple, Eastern Michigan (+10.5 at Illinois), UNLV (+18 at Northwestern) and UCLA.