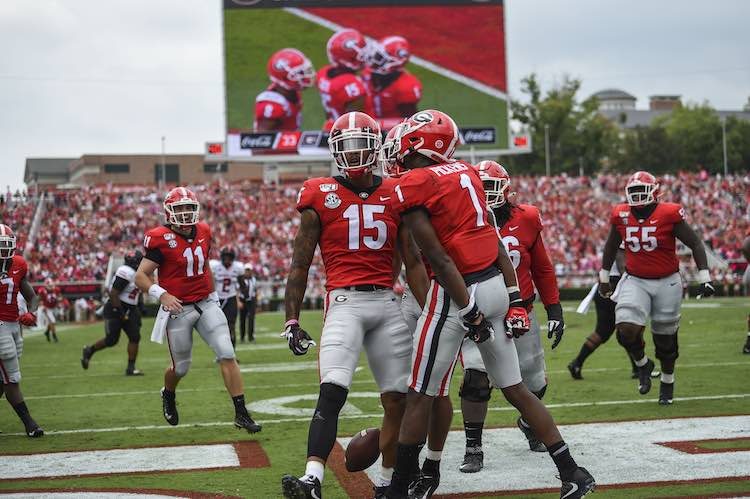 When No. 7-ranked Notre Dame travels to Athens this weekend to face No. 3 Georgia at raucous Sanford Stadium, it will mark the first time the Bulldogs will host a Top 10 non-conference opponent in more than 50 years.

The teams will complete a home-and-home series on Saturday evening two years after Georgia outlasted Notre Dame 20-19 in a barn burner in South Bend. The Bulldogs took the lead for good on a field goal with 3:39 remaining, then clinched the victory with a fumble recovery on the ensuing drive.

Regardless of the final result, the highly anticipated matchup will have massive national title implications.

“Our guys are excited to get to play on a national stage in a home game atmosphere that probably will be unrivaled in Georgia history from a non-conference standpoint,” Georgia coach Kirby Smart said during a weekly SEC teleconference. “Whether it’s Notre Dame, whether it’s Murray State we are going to have the same mindset. It is just another game.”

The contest features two of the most efficient quarterbacks in the nation. Both Georgia quarterback Jack Fromm and Notre Dame quarterback Ian Book rank in the Top 10 nationwide in career passing efficiency. Fromm went 16-29 for 141 yards in the 2017 win over the Irish. The two signal callers lead attacks that each average more than 500 yards in total offense on the season.

A Georgia grocery store's Irish Spring soap is “temporarily out of stock” ahead of UGA's showdown with Notre Dame https://t.co/6eycmWHKUW

While Georgia opened as a 12.5 point favorite, the line has fluctuated throughout the week. The public initially backed the Dawgs driving the spread up to -14 on Sept. 15, before it retreated back to -13.5 at several major sportsbooks.

Bob Scucci, vice president of director of race and sports operations at Boyd Gaming, observed some early money pouring in on the Irish at the start of the week.

“Usually when two good teams match up and one team gets a lot of points the word ‘value’ pops up,” Scucci said. “There’s more value in the public’s mind on Notre Dame then laying the big number with Georgia even though they are very good.”

After the spread fell under two touchdowns, bettors reversed course and returned to Georgia with the points. By the middle of the week, the spread reached as high 14.5. As of 7p.m. ET on Sept. 19, the line remained at Georgia -14.5 (-110).

Hours earlier, Georgia -14.5 represented PointsBet USA’s largest college football decision of the weekend, a company spokesman told Sports Handle. Despite a bit of a buyback on the Irish, more than 80% of PointsBet’s tickets backed Georgia with the spread at the time. The figure also translates to over 90% of the handle for Georgia-Notre Dame spread bets.

Chuck Esposito, director of race and sportsbook operations at Sunset Station in Henderson, Nev., anticipates that some late money could come in on Notre Dame especially if the spread stays above two touchdowns.

There has also been some movement on the total during the course of the week. After opening at 59.5 at Circa Sports, the total dipped to as low as 55.5 on Sept. 16. Georgia shut out Arkansas State 55-0 last week, while Notre Dame cruised over New Mexico 66-14.

Both are stout on defense, as the Dawgs rank third nationally in scoring defense and the Irish surrender 15.5 points per game (tied for 30th). Less than 48 hours before kickoff, the total hovered around 58.0.

Other intriguing matchups on Saturday

Elsewhere in the SEC, Texas A&M looks to avoid a two-loss September for the second straight year when it welcomes No. 8 Auburn to College Station. The No. 17 Aggies (+3.5) dropped their first contest of the season on Sept. 7 in a 24-10 loss to No. 1 Clemson.

At PointsBet, bettors are laying the favorites at nearly a 4-to-1 ratio with approximately 80% of the money on the Aggies. While Boyd Gaming has seen more two-way action on the game, bettors there prefer Auburn with the points.

Also on Saturday, No. 13 Wisconsin will host No. 11 Michigan at Camp Randall Stadium in Madison. While Michigan has struggled through two games, Wisconsin has defeated its two opponents by a combined score of 110-0. The Wolverines had a bye last week to regroup from a 24-21 double-overtime scare from Army. Michigan closed as 22-point favorites.

Keep an eye on Michigan’s rush defense versus Wisconsin running back Jonathan Taylor, a Heisman Trophy contender. Although the Wolverines surrendered 200 yards of rushing against Army, the Black Knights ran the ball 61 times. Taylor is averaging 6.8 yards per carry and has scored eight total touchdowns this season.

Since the beginning of last season, #Wisconsin HB Jonathan Taylor has 69 explosive runs (gains of 10+), 12 more than any other HB in #CollegeFootball

Michigan’s inability to perform in high-pressure games appears to have deterred some bettors as Wisconsin (-3.5) has drawn a good deal of money, Scucci said. The betting patterns convey a different story at PointsBet. While there is a 60-40 split favoring Wisconsin on the ticket count, about 60% of the handle is comprised from spread bets on Michigan.

Neither Michigan, nor Wisconsin have received much support on the futures market. At Station Casinos, Michigan opened at 10/1 in the offseason, tied with Oklahoma as co-fourth choice. Since the narrow victory over Army, the Wolverines have fallen to 16/1 at Stations to win the 2020 College Football National Championship. The Badgers remain at 50/1, their same opening price.

A large disparity exists between the top five teams and the rest of the field. Clemson and No. 2 Alabama are the co-favorite at 2/1, both down from their opening odds of 9/5. From there, Georgia (9/2), Oklahoma (5/1) and Ohio State (8/1) round out the Top 5. Only seven teams in the nation are priced under 25/1 to capture the national title.

It comes one week after the top five teams in the AP Top 25 all covered last Saturday, despite facing considerable spreads.

“In college football, you have four or five teams and then everyone else,” Esposito said. “It’s early in the season anything can happen with injuries, but it just appears that these good teams are rolling right now.” 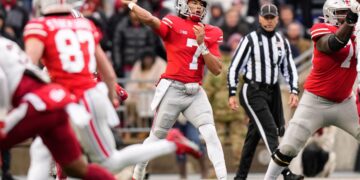 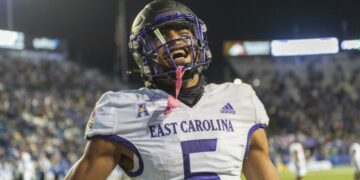