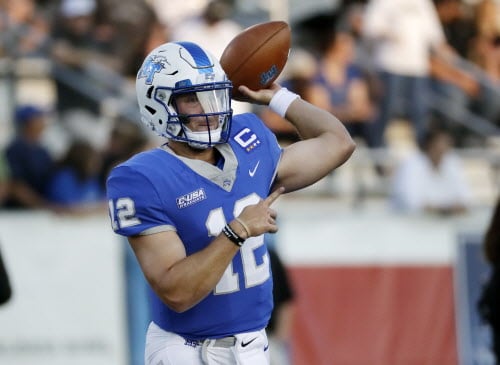 This week we look at Georgia Tech as a big favorite and why it’s not too late to cash in on woeful Rutgers.

I really like the Blue Raiders in this spot. Middle Tennessee comes into the game 1-2 but their two losses are to SEC teams (Georgia and Vanderbilt). The Blue Raiders had a week off to prepare for this game, while FAU is coming off a 56-36 loss to UCF last Friday night.

Middle Tennessee had taken nine straight in this series before FAU won at home, 38-20, last year. However, the Blue Raiders were without starting quarterback Brent Stockstill (shoulder), who is completing 69 percent of his passes, despite the tough early season schedule. Stockstill should have his way against an FAU pass defense that ranks 97th in the country.

Head coach Rick Stockstill is 22-7 SU at home since 2013. The line hasn’t moved off three but I’ll gladly take a field goal at home and call for the outright win by the Blue Raiders.

Rutgers is on automatic fade mode until it at least comes close to covering a football game. The Scarlet Knights have lost their last three games by a combined 149-30. Man, how bad is Texas State? Rutgers defeated the Bobcats 35-7 in the opener. This line opened at 16 or 16.5 at most books and has been bet up in some spots.

That’s still not enough according to Jason Simbal, vice president of risk of CG Technology. He admitted the lines for Rutgers games are still too low.

“Every year there’s a team that’s really terrible and often it takes a little bit of time for the books to adjust to how bad that team really is,” Simbal said. “In this game, it seems the adjustment didn’t come big enough. We opened with Indiana as a 16.5-point favorite and that’s up to 17.5 already.”

Keep fading Rutgers before their lines are so high the value is gone.

Bowling Green enters this game with a big problem. The Falcons rank dead last (129th) in the country at stopping the run. Through four games, Bowling Green is allowing 6.44 yards per rush and 333.5 yards per game on the ground.

Georgia Tech’s option attack will shred the Falcons’ defense all game long. The Yellow Jackets rank third in the country in rushing offense, averaging 5.94 yards per carry and 331 yards a game.

The line opened between 25.5 and 27.5 and has been bet up to over four touchdowns. Normally I don’t lay that much chalk, especially between two 1-3 teams. However, Bowling Green has already lost to Oregon by 34 and Maryland by 31. The Falcons are just 2-11 as an underdog under head coach Mike Jinks. Lay the points here.

Army lost a heartbreaker to Oklahoma in overtime last week as a 30-point underdog. In most cases, we would have to worry about a letdown but that’s not an issue with Army. A few hours after losing to Oklahoma, these kids were studying molecular biology and preparing to lead our country. Football is a nice break in the week for them.

The Bulls come in 4-0 and 3-1 ATS while averaging 40 points a game. However, Buffalo has feasted off the likes of Delaware State, Temple, Eastern Michigan and Rutgers. In Army’s last two games its defense held Oklahoma and Hawaii to their season low in points. Those are two of the nation’s Top 25 scoring offenses.

The line opened Army +9 at William Hill and +8 at the SuperBook and it’s down to 7.5 at both places. I’ll take the Cadets getting over a touchdown here and put a little coin on the money line too. Buffalo looks to be overvalued thanks to a soft schedule.

Here’s a real stinker for you. Nebraska is 0-3 both straight up and against the spread. The Cornhuskers are off to their worst start since 1945. Not exactly the way Scott Frost envisioned his return to Nebraska.

The Cornhuskers got blasted by Michigan last week 56-10 after losing their first two games to Troy and Colorado by five points each. Nebraska actually outgained its first two opponents by an average of 141 yards.

Purdue is coming off its first win of the season blowing out Boston College at home, 30-13, as a 6.5-point dog. Now the Boilermakers are a road favorite for just the second time in the last six years. Purdue lost to Rutgers as an away favorite last year.

Freshman quarterback Adrian Martinez returned last week for Nebraska and while the Huskers were overmatched against Michigan, look for them to run all over a Purdue defense that allowed a combined 399 yards on the ground in losses to Northwestern and Missouri.

I’ll take the points at home with Nebraska in the stinker of the week.