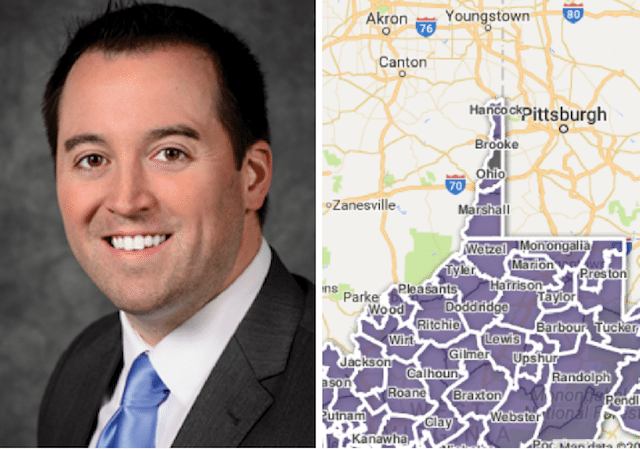 Fluharty adjacent to in image showing his District 03 (Ohio)

With the long-anticipated oral argument in New Jersey’s Supreme Court sports betting case (Christie v NCAA) now submitted and a decision forthcoming in the spring of 2018, federal and state lawmakers chewing on a nationwide expansion of legal sports betting are wrestling with what now.

Some members of Congress such as Frank Pallone Jr. (NJ-6) are pressing forward with legislation that would allow states legalize sports wagering, if the state desires, while other House officials like Dina Titus in Nevada (NV-1) and Doug Collins in Georgia (GA-9)  are calling for hearings on PASPA — the 1992 federal law that banned sports betting outside the Silver State. One state lawmaker of West Virginia, Democrat Shawn Fluharty of the West Virginia State House of Delegates, is spearheading the effort to prepare his state for legal sports betting — without delay.

“If there’s been one misconception with [sports betting] it’s that if the Supreme Court rules in New Jersey’s favor, that you’re going to have all of a sudden this influx of sports betting throughout the United States,” Fluharty told SportsHandle. “But here’s the problem: each state has to pass their legislation first, and the legislative world moves slowly.”

West Virginia Legislator Shawn Fluharty Is Urging His State to Get Ahead on Sports Betting for Competitive Advantage Over Nearby States, Optimistic of Bill Passage

West Virginia is among the states with legislation in the red zone but yet to cross the goal line. In March, the 33-year-old Fluharty, representing District 03 (Ohio County), introduced HB2751, which would amend the state’s constitution and authorize the State Lottery Commission to promulgate rules regulating and taxing sports betting.

The bill goes further than to just initiate rules drafting, but actually finds that federal law (PASPA) prohibiting sports betting outside Nevada is unconstitutional. West Virginia is among the 20 states backing New Jersey’s Supreme Court fight, having filed an amicus brief in the high court, with state attorney general Patrick Morrisey as the lead counsel on the brief.

An attorney who graduated from the West Virginia University College of Law in 2009, Fluharty is optimistic about his proposed measure passing in the next session upcoming in January, “looking a little different compared to what I initially introduced” he said, but nevertheless getting done.

PASPA is now 25 years old and New Jersey has been fighting the leagues for almost a decade. But Fluharty correctly predicted the motion of the tide prior to the Supreme Court agreeing in June to accept New Jersey’s case. Now the legislative work or “action” remains. Fluharty:

You have to have the stakeholders as part of this, and you have to have your legislative framework and regulatory process put together for a scheme prior to moving forward and green lighting everything. So, my intention with the legislation that I introduced was to, one, say West Virginia is going to be on the front end of this, and me telling fellow legislators this is what I predict will happen, and it looks like that’s going to happen.

States including Connecticut and Pennsylvania are close to ready for legal sports betting while other states like Michigan and New York have measures developing. A kick in the legislative rear? Numerous observations from the Supreme Court indicating there may be a favorable ruling for New Jersey, creating an opening for legal sports betting. Fluharty explains the momentum:

Now that the attention is on it, and we know the Supreme Court is going to come back in the spring, we are in a position. I think the right playmakers are involved in West Virginia now to say that we need to do this now. Our governor will sign the legislation. He’s certainly not going to oppose it. Obviously if you look at it, he owns a casino. So, this is certainly something that he would see as having a redeeming value for the state of West Virginia.

Sara Slane, senior vice president of public affairs at the American Gaming Association, has opined on the timing and pace of sports betting legislation. “You have 11 other states just beginning to have the conversation, the contemplation, of what this would mean to their state,” she recently told Bloomberg. “We certainly anticipate that more states will hit the ground running again in January when sessions convene.”

Of course, it’s important to get the legislation right. Pennsylvania recently passed an expansive gaming bill that legalizes online gaming and also preemptively legalizes sports wagering, pending a change in federal law. But the initial sports betting licensure fee is $10 million for existing casinos and there’s a 34% tax on sports wagering revenue, which is nothing short of absurd. The rate in Nevada is roughly 6.75%.

“We’re not going to tax it at that obnoxious rate that Pennsylvania decided to go with” Fluharty said bluntly.

The Rationale and Motivations Behind the Effort

First elected to the West Virginia House of Delegates in 2014, Fluharty emphasizes one of the major driving forces behind the movement to legalize sports betting, the notion echoed from the Supreme Court to your local sports bar:

People are already gambling. Everybody and their mother is basically gambling at this point on sports. But yet we’re not making a single penny off of it at the state level or at the federal level. Why would we not take advantage of this opportunity to regulate something that’s already taking place? Therefore making it safer and more productive, and I think at the same time shrinking the black market, deriving revenue from it, without raising anybody’s taxes.

Fluharty explained that potential revenue generated via sports wagering would benefit existing West Virginia causes and programs such as elderly care and the Promise Scholarship that helps in-state students to go to an in-state institution.

In fact, keeping West Virginia young people in state is one of his major priorities.

If you look at our state, we have young people leaving at one of the highest rates in the country. We have those who remain in West Virginia defaulting on their student loans at the highest rate in this country. The opioid epidemic has ravaged not just West Virginia, but our entire country, and in particular the Appalachian region. So, for me, we need to look at diversifying our economy in West Virginia and focusing on the future and what it looks like.

And sports wagering is one potential avenue for that diversification, like Colorado’s expansion of legalized marijuana, which represents the kind of state-level experimentation that PASPA impedes. It was a matter of federalism — not the desire to advance sports betting’s legalization — that brought Christie v NCAA to the Supreme Court.

“There’s no reason West Virginia can’t be at the forefront of this issue instead of being the last to act,” Fluharty explains. “And that’s just one of many different areas where I think we need to start concentrating on to show that we’re willing to play by a different set of rules instead of simply doubling down on our past, which by doing that we’ve kind of set ourselves back when it comes to competing in today’s economy.”

The economic opportunity is even more apparent given the location of Fluharty’s district — covering the northeastern panhandle smack between Pennsylvania and Ohio. “It sits about 45 minutes from Pittsburgh and on the border of Ohio” he said. “We are always competing with Ohio and Pennsylvania in everything that we do. This could be an opportunity for West Virginia to get in on the front end and maybe have a few years where we’re operating without Pennsylvania and Ohio competing with us” on sports wagering. He notes that West Virginia could also attract visitors and customers from those two states.

The momentum, incentive and opportunity is clearly there, and there’s roughly a three to six-month window — for all states — to get something done before the high court issues its ruling. Fluharty’s optimism is palpable, so we will see if he can punch some version of the  bill over the goal line before the Supreme Court rules.