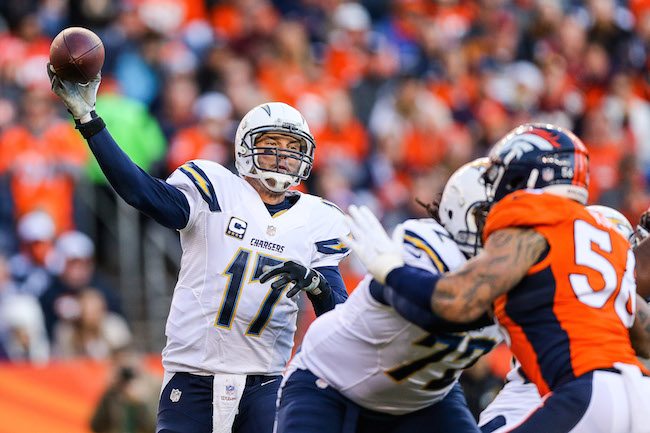 No thanks to the come-from-behind push forced by the Los Angeles Chargers against the Denver Broncos on Monday Night Football, only nine Westgate Las Vegas SuperContest participants survived NFL’s Week 1 without a blemish. In a record field of 2,748 in the $1,500 per-entry contest, nine players amounts to only .003 of the field.

The number of 5-0 entries would have been 16 or 22 but for the push, because 20 contestants who entered the MNF game at 4-0. But Chargers QB Phillip Rivers heated up in the fourth quarter after a Broncos interception, narrowing Denver’s lead to 24-14 with 8:10 to go, and then the Bolts took advantage of another Broncos turnover, a fumble, as Rivers found speedy wideout Travis Benjamin behind Denver’s defense for a 38-yard touchdown strike on the very next play. A missed field goal on each side in the final minutes and seconds sealed Denver’s 24-21 margin of victory.

How come just nine survived Week 1 perfect? (The 20 folks on the Broncos or Chargers at least will enter Week 2 with no losses and a 4-0-1 mark.) Well, all six of the most popular SuperContest selections went belly up. They included the Cincinnati Bengals (866 picks) who got waxed 20-0 by the Baltimore Ravens, the Houston Texans (863) who were embarrassed at home by the Jacksonville Jaguars, and the Tennessee Titans (839) who fell 26-16 to the Oakland Raiders as 2.5-point home favorites. The other losing sides in the top six include the win-but-no-covers for the Atlanta Falcons (819) and Pittsburgh Steelers (706), as well as the road-favorite Arizona Cardinals (742), who got throttled in the fourth quarter by the Detroit Lions in a 35-23 defeat.

As for the nine remaining perfect entries, they showed lots of NFC North love as 7 of 9 had the Detroit Lions as home dogs (+2) against the Cards and 6 of 9 chose the Minnesota Vikings as 3-point favorites over the visiting New Orleans Saints, who the Vikes easily handled 29-19 in the earlier MNF game. The Philadelphia Eagles also garnered support from 7 of 9. The SuperContest top prize this year is a whopping $1.3 million, the first time the top prize has crossed into 7-digit territory.

The Bengals host the Texans on Thursday Night Football in a game that can’t begin soon enough for two teams that want to put their Week 1 disasters behind them. As of this writing, the Bengals are 5-point favorites at the Westgate. Per NFL Insider Ian Rapoport, Texans rookie Deshaun Watson will make the start if he’s healthy enough after suffering a minor ankle injury in Sunday’s game.

In one more bit news involving the SuperContest, and regrets, one person in the new $5,000-per entry, winner-take-all SuperContest Gold contest failed to submit his picks before the deadline, as heard on VSiN’s “Follow the Money” with Mitch Moss & Pauly Howard. That’ll be a tough hole to escape and it’s the sports betting boner move of the week.