Steph Curry willed the Golden State Warriors to a critical comeback win on Friday night, with a series-high 43 points in a 107-97 Game 4 victory over the Boston Celtics. With the victory, the Warriors knotted the NBA Finals at two games apiece ahead of Monday’s Game 5. Despite a nagging sprained ankle, Curry drained seven 3-pointers in the win.

If Golden State can defend its homecourt in two of the final three games of the series, the Warriors will win the NBA title for the first time since 2018. The Celtics, meanwhile, are two wins from their first title since 2008. The Warriors are 3.5-point favorites at Caesars Sportsbook to win Game 5; the total is 212 points.

Following the Game 4 victory, the Warriors’ odds to win the series improved to -150 at FanDuel. After failing to take a commanding 3-1 series lead, the Celtics swung to slight underdogs at +125.

The Tampa Bay Lightning advanced in their bid for a third straight Stanley Cup with a 2-1 win over the Rangers on Saturday night. Only five teams in NHL history have won the Cup in three consecutive seasons, and no team has accomplished the feat since 1983. The Lightning can become the sixth by defeating the Colorado Avalanche in the finals.

But unlike the previous two seasons, the Lightning will not be favored in the finals. The Avalanche, who host Game 1 of the series on Wednesday night, are considerable -190 favorites to win the title over the Lightning (+155) at BetMGM. Tampa Bay has won all three series in this year’s Stanley Cup playoffs as the lower seed.

Rory favored at the U.S. Open in Brookline

McIlroy, a four-time major champion, has been a vehement critic of the LIV series in recent months. The breakaway tour launched last week in London when Charl Schwartzel of South Africa defeated countryman Hennie Du Plessis by one shot for the victory. Schwartzel received a $4 million check for the win, nearly $2.5 million more than McIlroy took home for his victory in Toronto. On June 9, the PGA Tour suspended 17 golfers who took part in the London event, then vowed to suspend all future LIV participants.

At SuperBook Sports, McIlroy is the 12/1 favorite to win the U.S. Open, the year’s third major. Masters champion Scottie Scheffler and PGA Championship winner Justin Thomas are the co-second choice at 14/1, followed by Jon Rahm, the solo third choice at 16/1.

Of the LIV golfers in the field, only two are in the SuperBook’s top 20: Dustin Johnson and Bryson DeChambeau. Johnson has odds of 35/1 to win the event in Brookline, Massachusetts, while DeChambeau has odds of 60/1. Johnson and Phil Mickelson are expected to receive intense media pressure at the major after jumping to the LIV series, a lucrative venture backed by Saudi Arabia’s sovereign wealth fund.

Notre Dame pulled off the biggest upset of the NCAA Division I baseball tournament on Sunday, with a 7-3 knockout win over top-ranked Tennessee. The Vols, who entered Game 3 of the Super Regionals with a 56-8 record, were the overwhelming favorite at multiple books to capture the 2022 College World Series.

The eight-team bracket begins on Friday at Charles Schwab Field in Omaha, Nebraska. Only two spots remain as of Monday morning and will be filled by the winners of No. 2 Stanford vs. UConn and No. 3 Oregon State vs. Auburn. Stanford is the second choice at FanDuel to win the CWS at +460, just ahead of Oregon State at +470. Texas, which defeated East Carolina in three games, is the favorite to win it all at +360.

If the Game 5 winner fails to close out the NBA Finals on Thursday night, the Warriors and Celtics will meet on Sunday night in a deciding Game 7. The finals last went the distance in 2016 when the Warriors lost to a LeBron James-led Cavs team.

Through four games, Curry has averaged 34.9 points per game on 49.1% from 3-point range. While Celtics swingman Jayson Tatum has struggled at times in the finals, Jaylen Brown has averaged 22.3 points, 7.8 assists, and 7.0 rebounds per game. As of Monday, it is unlikely that anyone but Curry, Brown, or Tatum will win Finals MVP. As a result, nearly every major U.S. book has pulled odds on the MVP race.

Still, there are a litany of series-long props still available on individual players, such as these at DraftKings: 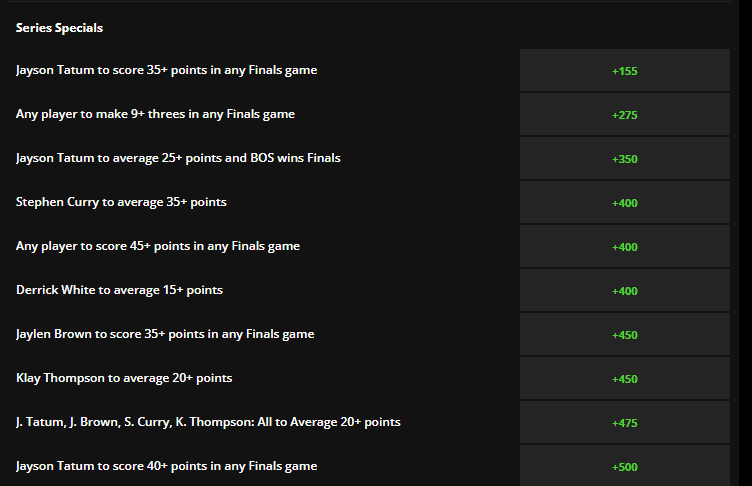