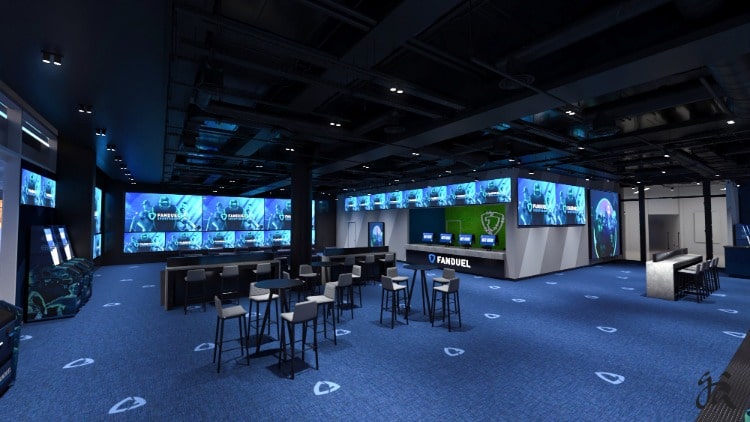 Just about five months after Arizona lawmakers made event wagering legal in the state, some operators are prepping to go live at the first possible moment — 12:01 a.m. Thursday. The Arizona Department of Gaming recently issued 18 event wagering licenses — eight to professional sports teams/franchises and 10 to tribal casinos across the state.

Most of the major operators partnered with professional teams/franchises have plans to go live in some fashion Thursday. BetMGM, Caesars, DraftKings, FanDuel, and Penn National Gaming/Barstool Sportsbook will launch digital platforms, while some will also welcome bettors for in-person wagering. Bally Bet, partnered with the WNBA Mercury, won’t launch its digital platform until next year and doesn’t have a retail location, while the NHL Phoenix Coyotes don’t have an announced partner.

FanDuel, which was the first to announce Arizona market access when it partnered with the Phoenix Suns last fall, will open its state-of-the-art space at the Footprint Center at 9 a.m. Thursday. Gov. Doug Ducey and former NBA players Channing Frye and Richard Jefferson will be on hand for a 3 p.m. ribbon cutting, followed by a Thursday Night Football launch party.

The modern sportsbook, which will be only the second one in the U.S. to open in an NBA arena (William Hill, now Caesars, opened the first at Capital One Arena in Washington, D.C., last summer), is in a converted restaurant space. It will feature LED screens that wrap around the viewing area, live teller windows, kiosks, and a seating/viewing area. Players can enter the space either from the street or from a concourse inside of the Footprint Center.

“Our technology is user-friendly and intuitive,” FanDuel Director of Designing and Construction of Sportsbooks Jose Torres told Sports Handle. “You don’t need an engineering degree to place a bet. It’s very simple to use. The other part of the technology, the state-of-the-art LED screens that wrap around the viewing area, create a more immersive experience and we try to create an experience that you wouldn’t have at home.”

Arizona’s launch dovetails with the start of the NFL season, which kicks off with the Dallas Cowboys at the Tampa Bay Buccaneers on Thursday night. The league is partnered with most major operators, as BetMGM, Caesars, DraftKings, FanDuel, FoxBet, PointsBet, and WynnBet have all signed deals.

BetMGM will leverage its partnership with the NFL during the opening week by debuting is new “Win Like a King” advertisement, featuring Jamie Foxx, during games.

On the tribal side, Kindred is among those that will go live. Partnered with the Fort Yuma Quechan Tribe, Kindred is aiming to launch its mobile platform — Unibet — Thursday, according to Senior Vice President Manuel Stan. “When it comes to retail, we are targeting the launch by the end of the month, or as soon as all our partners will get the licenses required to operate in the state,” Stan said.

The tribe owns and operates the Paradise Casino in Yuma, near the California border.

Where you can bet, pro-team edition

Here’s a look at where you can bet — both in person and in cyberspace — beginning Thursday, and what operators are offering:

Mobile launch: 6 a.m. local time Thursday. PNG’s Barstool Sportsbook will be offering a $1,000 new player offer (make a deposit and get the first wager risk-free up to $1,000), the Dave & Dan’s $1.5 million Overs Tournament, and two specials on the Bears — a multiplier odds boost on a $5 bet to win $50 if the Bears cover the spread. Barstool is also offering Arizona bettors $400 worth of free bets when a player deposits $100 or more using the code “Arizona.”

Retail launch: Not yet announced. Penn National Gaming will be among the first to open a sportsbook at a NASCAR venue through its partnership with Phoenix Raceway.

What they’re saying: “We’re extremely excited to be partnering with NASCAR to launch our online Barstool Sportsbook in Arizona just as the college football season has kicked off and the NFL season begins tomorrow.”

Penn National Gaming has secured statewide access in Arizona for its #Barstool Sportsbook brand as part of an exclusive sponsorship with NASCARs Phoenix Raceway, host of the sport’s season-ending championship weekend in November. pic.twitter.com/X7uAkBTcg6

Mobile launch: Tentatively 6 a.m. Thursday. BetMGM is offering myriad specials and promotions, including $20 added to every mobile account from which a wager is made during Week 1, $1,000 risk-free for college football, and several college football team-specific wagers. Players will also be able to build a parlay in a single college football game. The company is offering several free-to-play games.

Retail launch: BetMGM plans to open its retail sportsbook at State Farm Stadium in time for the 2022 NFL season. The company says the book will “combine the excitement of a Las Vegas book with the in-person energy of NFL stadiums. We’re very excited about the opportunity there and look forward to sharing more details as we get closer to opening.” BetMGM is also partnered with Gila River Casinos and will open sportsbooks at the Wild Horse Pass, Lone Butte, and Vee Quiva casinos later this year, according to a company spokesman.

What they’re saying: “We are very excited about the future in Arizona,” Matt Prevost, chief revenue officer at BetMGM, said. “During the NBA playoffs, the world learned that the state has one of the most passionate fan bases in the country. With that comes a lot of expectations and we look forward to delivering an above-and-beyond sports betting experience with unique mobile and retail activations throughout the state.”

Retail launch: Unknown. BetRivers is partnered with the Indoor Football League’s Arizona Rattlers, who play at the Footprint Center. The company has not announced if it will have a retail sportsbook. FanDuel was the first to lay claim to the arena through a partnership with the Phoenix Suns.

Retail launch: Thursday at ticket windows 21-25 and at five kiosks on the north side of the plaza in front of the new sportsbook site. Caesars has plans to build out a new sportsbook in what is now the Game 7 Grill. The new space will include teller windows, kiosks, an odds wall, a video wall, a sports bar and a broadcast studio. The permanent space, which will cover 20,000 square feet and two stories, won’t open until early 2022.

What they’re saying: “Caesars Sportsbook at Chase Field will bring to life the vision of our brand by celebrating the Caesars promise of treating everyone like royalty,” co-president of Caesars Digital Eric Hession said via press release.

Mobile launch: To be determined

Retail launch: To be determined

What they’re saying: “We are fortunate to have an ownership group with tremendous expertise in sports gaming and we look forward to launching our operations this season,” a Coyotes spokesperson said Wednesday. “We are in the process of finalizing details regarding our sportsbook operator and will provide more information presently.”

Mobile launch: Thursday, TBA. The company is offering a $150 launch bonus with no deposit as well as specials on “double-your-money” specials that will be posted Monday for the Sept. 16 New York Giants vs. Washington Football Team Thursday Night Game and the Sept. 19 Arizona-Minnesota game. DraftKings went live with its DFS product Aug. 28.

Retail launch: In a press release earlier this year, DraftKings said it was aiming to create a “visually stunning 19th hole experience” at TPC Scottsdale. The company is the first to partner with a PGA venue for sports betting. There is no set opening date.

What they’re saying: “I’ll tell you what’s going to make Arizona different than Nevada, for instance,” DraftKings Race and Sportsbook Operations Manager Johnny Avello told the Arizona Republic. “It’s that you don’t have to go into a bricks-and-mortar location to sign up. You can remotely download the app and fund it and you’re off and running.”

Retail launch: FanDuel will open the doors to the new retail sportsbook at Footprint Arena at 9 a.m. Thursday with plans for a formal ribbon-cutting ceremony at 3 p.m., followed by a launch party. The hyper-modern sportsbook will be accessible from outside of the arena, and will feature teller windows, kiosks, a state-of-the-art video wall, comfortable seating, and more.