The Vegas Golden Knights on Tuesday notched yet another “first.”

In 2017 the Golden Knights became the first of the four major professional U.S. sports leagues to officially make Las Vegas their home and in June, it became the NHL’s first expansion team since 1968 to reach the Stanley Cup Finals (in vastly different circumstances), ultimately falling to the Washington Capitals 4-1.

This newest first involves the newest NHL franchise joining with bookmaker William Hill US — in a “landmark, multi-year partnership” the first-ever between a professional U.S. sports team and a sportsbook. 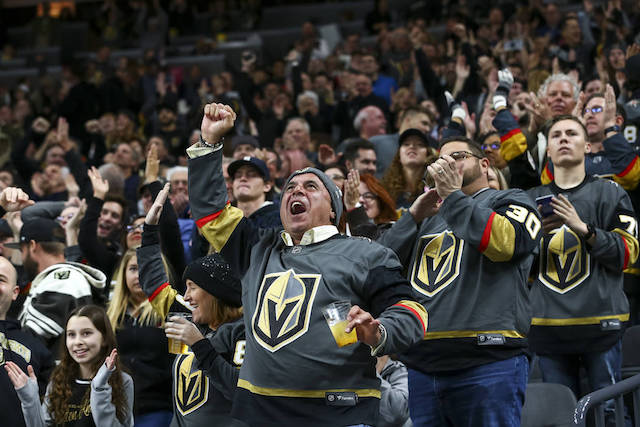 News of the deal was first reported by Sports Business Journal, which added that neither the team nor the bookmaking company would discuss terms, other than to confirm that it was multiyear and non-exclusive.

“We are always looking for innovative ways to engage different segments our fan base and provide a unique fan experience,” said Vegas Golden Knights President Kerry Bubolz in a news release.

This partnership is significant for what it represents: a further crumbling of the divide between gambling and casino companies, and sports leagues. From what we know of the deal itself, it’s a traditional marketing-branding arrangement. From the release:

William Hill US and the Golden Knights will collaborate on engaging with fans of legal betting age through various media, advertising and promotional platforms. The partnership will feature a TV visible dasherboard, in-arena signage, updated league-wide odds displayed on the in-arena Knight Tron during intermission, an away game watch party, and recognition on the LED ribbon board of the “William Hill Line Change” when the Golden Knights make a line change during the game.

William Hill Line Change — that’s pretty clever. Per SBJ, “once per period, the William Hill logo will appear on the ribbon board when the Golden Knights change lines on the fly,” and will also be linked on radio broadcasts.

During the last NHL season, the Golden Knights actually offered the sports and entertainment world a look at the future of fan experience and engagement: fans making legal sports bet from the arena seats, using mobile sportsbooks. No kiosks necessary.

The NHL’s Position and Other New Deals

While the NBA, Major League Baseball and PGA Tour have been marching in lockstep all year for state legislation that would require state-licensed sportsbooks to purchase “official league data,” the NHL and commissioner Gary Bettman haven’t signaled exactly how they plan to navigate a new era. Obviously they had no qualms about housing a team in Las Vegas.

On the “data” front (or the league-produced accounting of statistical information in real time of what everyone watching) Bettman has said he wants bookmakers  to buy league “data” or rights, he made clear in August.

This Golden Knights-William Hill deal isn’t quite that.

Neither side makes reference to league data or scoring in its summary of deal points. It’s purely a marketing arrangement and obviously mutually agreeable one that both are celebrating.

Elsewhere, MGM Resorts International and the NBA in July entered a three-year data/marketing partnership worth a rumored $25 million, while in September, the Dallas Cowboys broke new NFL ground by partnering with casino business. Oklahoma’s WinStar World Casino became the team’s official team partner. It’s allowed to use a team’s logos and trademarks and was made possible after NFL owners amended their bylaws to allow casinos to obtain official partnerships with NFL teams.