Less than 24 hours after the District of Columbia Council authorized sports betting in the shadow of Capitol Hill, the federal government stole its thunder — twice. On Wednesday, it was reported that the Department of Justice on Friday will offer a new interpretation of the Wire Act, which prohibits using “wire communication facility for the transmission in interstate” sports betting.

Given that the D.C. Council on Tuesday legalized sports betting (pending the Mayor signs off and the bill survives a Congressional review), and even went so far as to enact emergency legislation that allows the D.C. Lottery to begin the process of developing regulations, the timing from both federal quarters seems curious. After all, Utah Senator Orrin Hatch, one of the architects of the Professional and Amateur Sports Protection Act (PASPA), has been promising new legislation since PASPA was struck down by the Supreme Court in May. Seven months later, and on the day after the nation’s capital became the seventh jurisdiction to authorize sports betting this year, it’s finally ready? And while the Wire Act is oft discussed in sports betting circles, what possible reason could the DOJ have for offering a new interpretation days before Christmas?

If there is a new opinion offered on Friday, it will mark the second time this decade that the DOJ has reinterpreted the Wire Act. In 2011, the Office of Legal Counsel made clear that it believes that the Wire Act applies only to interstate sports wagering and allowed for state lotteries to offer products online.

How will the DOJ interpret the Wire Act?

The question this time around is whether or not the DOJ will interpret that the act applies to all manner of internet gaming, which would put online poker, and potentially some states with online lotteries in the crosshairs. Among the specific examples is an iGaming pact between Nevada, New Jersey and Delaware that allows the states to pool poker players in different states, effectively transferring funds or making bets across state lines. 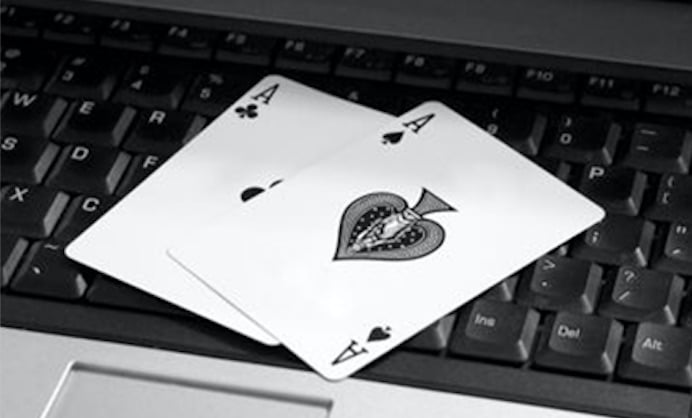 On the lottery front, of the seven states that have legal sports betting, three are regulated by their state lotteries. Under the District of Columbia law, the lottery will not only regulate sports betting, it will have a monopoly on interactive sports betting. And while an emergency bill was passed on Tuesday that effectively makes sports betting legal immediately in D.C., the city must still wait for approval from Congress for the law to become permanent. All of which begs the question — what if the DOJ determines that the Wire Act applies to ANY interactive betting? Is D.C.’s law then void due to federal law?

What about other states? West Virginia, Delaware and Rhode Island are the three “lottery” states that have launched sports betting. None currently offer mobile sports betting from the comfort of your own home, but a Rhode Island Senator on Wednesday said he’s planning to draw up internet sports betting legislation that would allow just that for the 2019 session.

Almost undoubtedly, a reinterpretation of the Wire Act would change nothing for state lotteries with sports betting, thanks to the intrastate nature of the offering. In addition, one of the key figures believed to be behind the push — top GOP mega-donor and staunch anti-online gambling proponent, Sheldon Adelson — has never targeted the state lotteries or sports betting, instead focusing his efforts on the abolishment of online casinos. If the reinterpretation is viewed as an appeasement to Adelson, it’s unlikely an opinion would go above and beyond what he seeks.

And even if online casinos are strongly targeted, legal markets in New Jersey, Delaware, and soon-to-be Pennsylvania, would also probably be safe, although their bottom lines may be impacted due to card processors getting spooked and refusing to process payments.

Still we won’t know for certain until we see the language of the opinion.

At the heart of these question is this: What is the Wire Act? Originally passed in 1961 by then Attorney General Robert Kennedy, the Wire Act was originally intended as a way to thwart organized crime. Just talking about it conjures images of back-door meetings between gangsters from families with names like Gambino or Luciano. At the time it was enacted, the internet wasn’t even a glimmer in the universe. Given its intent, should the Wire Act still even exist? That’s not a question to be answered here, but a valid one nonetheless.

Though the Wire Act may now seem outdated, it exists, and the real question is how to interpret it in a virtual world. The original document states:

The Wire Act can be broken into at least four elements:

Wire Act not relevant to DFS

As such, the daily fantasy is not affected by the Wire Act because it is not a “sporting event.” Furthering this notion, it would seem that lotteries, and for that, matter, poker, would be exempt. Neither involves a sporting event. In fact, going even further, lotteries or any other sort of interactive gaming within state borders should be also exempt. The law, after all, specifically refers to sports betting and “interstate or foreign commerce.”

When the Wire Act was working its way through the legislative system, the very question of its scope was discussed during a senate hearing. Consider this exchange (also courtesy of Holden) between then Senator Estes Kefauver (D-TN) and Assistant Attorney General Herbert Miller:

Senator Kefauver: I can see that telephones would be used in sporting contests, and it is used quite substantially in the numbers games, too. How about laying off bets by the use of telephones and laying off bets in big-time gambling? Does that not happen sometimes?

Mr. Miller: We can see that this statute will cover it. Oh, you mean gambling on other than a sporting event or contest?

Mr. Miller: This bill, of course, would not cover that because it is limited to sporting events or contests.

Should the Office of Legal Counsel provide a new interpretation on Friday (or anytime), it’s unclear what that revised opinion will be. And it will be just that — an opinion on how to interpret the law, rather than a new law. But either way, the sports betting — and gambling — community will hang on every word.