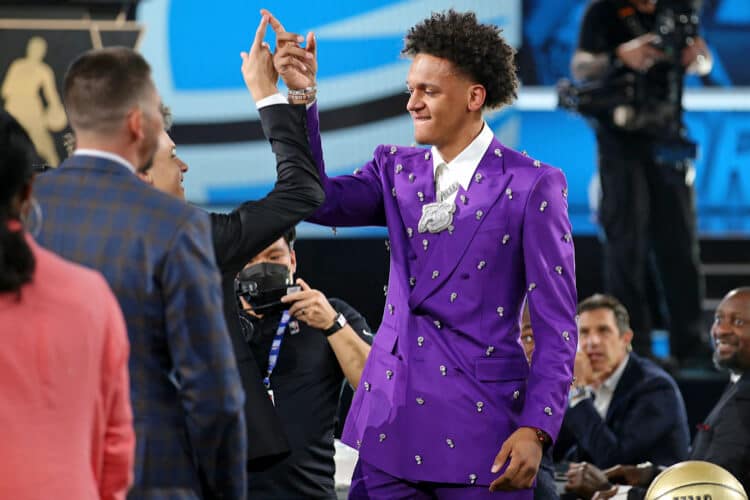 It feels impossible to type “Woj was wrong,” so let’s just go instead with “Woj wasn’t right.” It’s still alliterative, so there’s that, but wow: Woj. Wrong. Whoa.

At 8:41 a.m. ET Thursday, ESPN insider Adrian Wojnarowski — widely considered the most in-the-know NBA reporter in the world — tweeted out that the first three picks of the draft were “increasingly firm,” with Jabari Smith going to the Orlando Magic, Chet Holmgren going to the Oklahoma City Thunder, and Paolo Banchero going to the Houston Rockets.

As team boards finalize today, the 1-2-3 of the NBA Draft is increasingly firm, per sources: Jabari Smith to Orlando, Chet Holmgren to Oklahoma City and Paolo Banchero to Houston.

Prior to the Woj tweet, Banchero, who was as high as +2200 on FanDuel a few weeks ago to be the No. 1 pick, had rocketed overnight to become the favorite to be picked first. In the days leading into the draft, Banchero’s rise was happening slowly, with his odds increasingly shortening. But about seven hours before Woj’s tweet, Banchero suddenly became the favorite, with odds as short as -200, and later -230.

But the early-morning Woj bomb changed all that. Sportsbooks rushed to take down the market and rejigger the odds. Within minutes of Woj sharing the information from his sources, Smith was back to being the heavy favorite, with “heavy” being an understatement — Smith was -10000 to go No. 1.

As draft day Thursday rolled on, the market tightened a bit. Smith’s odds went down to -6000. Down to -2100. Down to -476 on PointsBet. Smith, in fact, got all the way down to -175 on FanDuel before he shot back up with about three hours to go before the draft.

It was looking like Woj was right, and the bettors who pushed Banchero to the top of the leaderboard some 18 hours earlier — and continued to bet him throughout the day Thursday despite Woj’s “increasingly firm” stance — were wrong.

With five minutes to go …

And then Woj broke. Not only the news, but, probably, his own brain when, with literally five minutes to go before the draft started, he dropped another bomb: Banchero was “looming as a frontrunner” to go No. 1.

As the Orlando Magic move closer to getting on the clock, Duke's Paolo Banchero is now looming as a frontrunner to be the No. 1 overall pick in the 2022 NBA Draft, sources tell ESPN.

While this writer’s screenshot thumbs weren’t quick enough on the draw, Banchero closed at FanDuel at -5000 to be the No. 1 pick — which, of course, he was.

In fact, here’s a minute-by-minute breakdown of Banchero’s odds at FanDuel in the last 25 minutes leading up to the draft (image courtesy of FanDuel).

It was a whirlwind day for NBA draft bettors, and, at least for one day, it was Bettors 1, Bombs de Woj, 0.

Vegas knew it was Paolo yesterday.

‘Not the biggest fan’

Of course, draft betting markets — which are only legal in a handful of states — are the bane of bookmakers’ existence.

“We don’t normally do that well on any of these drafts, because they’re information-based and not played out on the field,” Avello said. “I’m not the biggest fan of booking these drafts, where other people can get information before we get it.”

As a result, betting limits on these draft markets remain, well, limited.

With that in mind, it’s worth noting not all sportsbooks decide to wade into these dangerous waters.

You know who got this NBA Draft right?@CircaSports. They chose not to try and book it. pic.twitter.com/I2gqm8sHu8

Of course, this Woj-Banchero-bettors story is not the first time the draft markets have gone cuckoo bananas; this past NFL draft was another example of “insiders” moving markets.

Very early in the NFL draft process, Ikem Ekwonu, an offensive lineman for North Carolina, was 100/1 to be the first pick in the draft. Then noted NFL draft analyst Dane Brugler dropped his mock draft for The Athletic and had Ekwonu as his projected top pick. Within the hour, Ekwonu fell to 5/1.

Things didn’t get any more predictable from there, with Travon Walker getting steamed days before the draft, all the way from a +600 underdog to a -500 favorite — mostly thanks to a Peter King column.

For these and other information markets, loose lips can sink ships, Woj bombs can miss their mark, and savvy bettors willing to get down in the trenches can count their winnings.